Though these two might not be the most well-known players on the circuit, their presence at the top tables speaks of their abilities. Fumio Hoshino from Japan has drafted a four-color special with plenty of removal. His opponent, King Yim Kingston Tong has a more consistent G/W/u deck, featuring plenty of mana fixers. 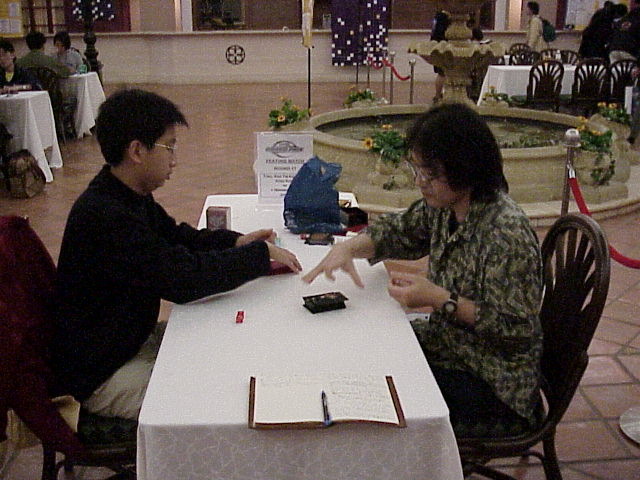 Tong mulliganed into a perfect mana draw. Hoshino matched him. Tong was able to hold off Hoshino's attackers with the "combo" of Amphibious Kavu and Tidal Visionary. A turn later, Hoshino used the damage mode of Darigaaz' Charm to break through.

Tong attacked with his Visionary and played a Serpentine Kavu. That one point of damage cost him his Kavu when Hoshino played a Shivan Emissary. The only defender he had left to play was a Llanowar Cavalry. Hoshino played Fires of Yavimaya and Volcanic Imp. Tong conceded.

Game two kept up the lightning pace of its predecessor. After losing his Quirion Elves to Defiling Tears, Tong kept his opponent off black mana with Dream Thrush. Hoshino's woes were compounded by a lack of Forests. These troubles let Tong play Benalish Heralds, Aurora Griffin and Serpentine Kavu unopposed.

Finally, Hoshino found a Forest. He fetched another with Quirion Trailblazer, chumping to stay in the game. He escaped Thrush-lock one turn with the instant-speed Darigaaz' Charm removing the Griffin. Still, he was behind. Tong had an active Samite Pilgrim. He soon brought lethal damage.

Like all things, slaughters seem to come in threes. Hoshino's arcane land base stung him again in the deciding game. He had only Forests and a lone Island. A Kavu Chameleon kept his opponent's ground creatures back. Only the Aurora Griffin could get by.

Tong played Atalya, Samite Master. The legend tightened his grip on the game. He played a Glimmering Angel the next turn, but didn't have enough white mana to save his Griffin from a Flametongue Kavu. A desperate Fact or Fiction from Hoshino yielded nothing significant. He did manage to trade his Chameleon for Tong's Serpentine Kavu when the latter forgot what cards he had on the table.

Hoshino drew a Swamp and cast Do or Die. He separated the Angel from the rest of his opponent's creatures, and it went to the graveyard. While he struggled to find defenses, Tong kept the pressure up with Benalish Trapper and Shackles. Most of Tong's creatures were busy keeping Hoshino under wraps. He was only attacking for two a turn.

Hoshino played Smoldering Tar, and immediately sacrificed it to kill the tapper. He forgot to count his opponent's Quirion Elves among his white mana producers, though. Atalya negated the spell's effect. That mistake seemed to be the death knell. Tong drew Rushing River, removed all opposition, and attacked for the win.