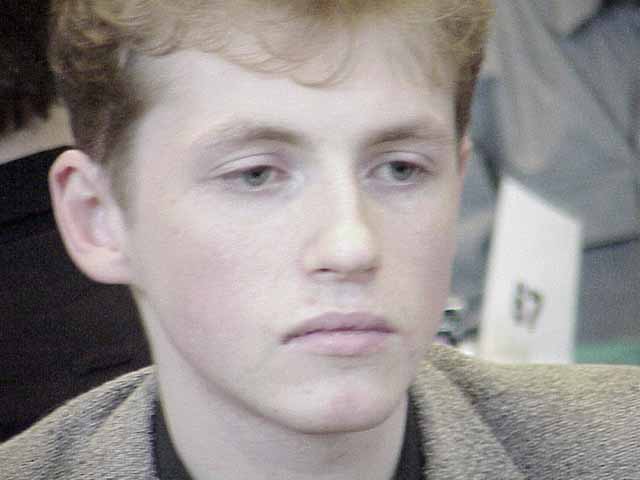 Although most people who follow tournament coverage may not know these two competitors yet, to the Russian players attending Grand Prix Helsinki (and there are quite a few) this was likely the most exciting match of the tournament.

Firsov and Strakhov met in the finals of the Russian National Championships in both 1999 and 2000. Firsov won both times, and is one of the very few players to boast multiple Nationals titles.

In addition, there is some rivalry between their home towns. "Any time these two meet it is a major spectacle," explains Janna Davidova, one of the few female players at this tournament. "Konstantin is from St. Petersburg and Alex is from Moscow, so there are many players here rooting for their city."

In the first game Strakhov chose to keep a one land hand because he was going second and had a Chimeric Sphere. Always a dangerous decision, it ended up working out moderately well that time.

Firsov cast a turn 3 Raging Kavu followed by a pair of Kavu Aggressors. Strakhov shut down the onslaught with his single Galina's Knight. He then cast Lobotomy to find out some bad news - Firsov was holding some great cards. He chose Urza's Rage over Explosive Growth or Sulam Djinn.

Firsov attacked with his creatures and used Explosive Growth to save the one blocked by a pro-red Merfolk. Strakhov went on to summon a Samite Archer. Firsov, who failed to draw a sixth land, attacked with his three creatures again. He lost a Kavu Aggressor to Galina's Knight, but he also forced Strakhov to trade his Samite Archer for Raging Kavu, which would not have survived long after the Archer lost its summoning sickness anyway. Firsov summoned a Raging Kavu before ending his turn.

Strakhov cast a second Samite Archer and followed it up with Vodalian Serpent, setting up strong defense. However, Firsov had Tribal Flames which allowed him to take out one of the blockers and alphastrike (attack with all creatures) for the win.

In the second game Strakhov opened with a Hate Weaver and followed it up with Shoreline Raider before Firsov cast his first creature - a Kavu Aggressor.

Strakhov was the real aggressor in this game though. He attacked with both and used the Weaver's ability to deal an additional two points of damage with the Raider. Firsov retaliated with an attack of his own but did not cast a permanent.

Firsov attacked again and had his Raider die to an Urza's Rage. Although normally it is too good a removal spell to be spent on a 2/2 creature, protection from Kavu is an incredibly good ability against Firsov's deck and his decision to cast the Rage was a correct one.

Unmoved by the loss of a Raider, Strakhov summoned a Faerie Squadron with kicker. His creatures quickly outraced a pair of Kavu Aggressors, which were the only creatures a slightly mana-short Firsov was able to summon.

Strakhov cast an early Galina's Knight in game 3, preventing Viashino Grappler from attacking. Both players had slow draws and nothing happened for a few turns. Once Strakhov got to four mana though, he cast Lobotomy, choosing Frenzied Tilling over Serpentine Kavu, Canopy Surge and Explosive Growth. This choice was not so strange since he was holding Dromar the Banisher in hand! Strakhov found a second Tilling in his opponent's deck and took that out too.

Firsov summoned a Serpentine Kavu and ended his turn. Strakhov, still a turn away from casting the Dragon, cast a second Lobotomy! This time he took Explosive Growth over Sulam Djinn and Canopy Surge. Once again, he was able to take out a second Growth from the deck.

Firsov brought his opponent down to 16 life and cast a Kavu Chameleon he just drew. Strakhov untapped and cast his dragon.

Firsov attacked with both green creatures. Strakhov could not block, as he knew of Canopy Surge in Firsov's hand and was forced to go down to 8 life. Firsov summoned a Kavu Aggressor, keeping the pressure on.

Strakhov did not have a creature to play on the following turn. He chose to keep the Dragon back as a blocker, rather than bounce anything back to Firsov's hand.

Firsov alpha-striked again. He lost Kavu Aggressor and Serpentine Kavu to his opponent's two blockers, but brought Strakhov down to one life point. With three direct damage spells left in his deck that was further thinned out by Lobotomy, he was in a good shape despite the Dragon on the table.

Firsov kept the Dragon back for another turn by summoning Sulam Djinn. However, on the turn after that, Strakhov drew exactly what he needed - a large blocker. He cast Vodalian Serpent with kicker and still had mana left over to attack and activate the dragon's ability, returning the Djinn to Firsov's hand.

Over the course of the next three turns he continued to attack with the dragon, keeping Firsov from summoning any more threats. He sealed the game by casting Faerie Squadron and holding an Annihilate in his hand. Firsov's last chance was to draw a direct damage spell, but luck wasn't with him. Strakhov finally got his revenge against an old-time rival and brought much joy to the spectators from Moscow gathered around the feature match area.