This is a key match for both Ootsuka (25 points) and Okamoto (24 points). A win for either will essentially guarantee a berth in the Top 8. Okamoto is a long-time player from the Osaka region who consistently posts good results, but has yet to make a Top 8. Ootsuka is fresh off his victory in April's Big Cup, which earned him 400,000 yen in prize money, and is looking to prove that he has what it takes to play in the big leagues. 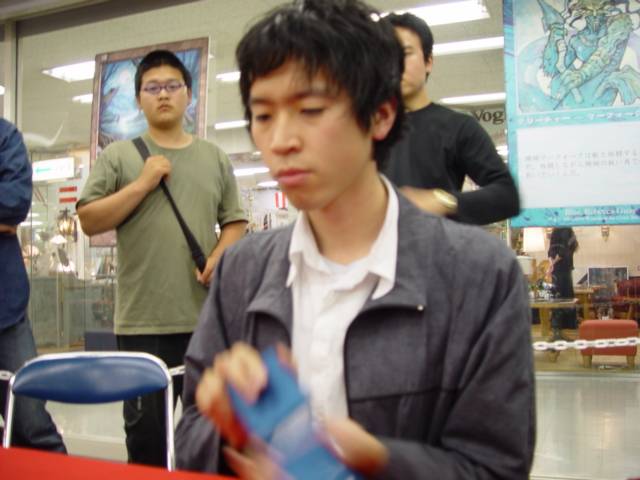 Playing first, Okamoto played a second turn Phantom Nomad. Ootsuka responds with a Harvester Druid, but Okamoto deals with it quickly by putting a Psionic Gift on the Nomad. Looking to start some kind of offensive before Okamoto's control deck established itself, Ootsuka plays a Mad Dog, but Okamoto continued to solidy his defense with a Mystic Zealot. Ootsuka's offensive sputtered out at this point when he stalled at three lands, and conceded when Okamoto played Mirror Wall. 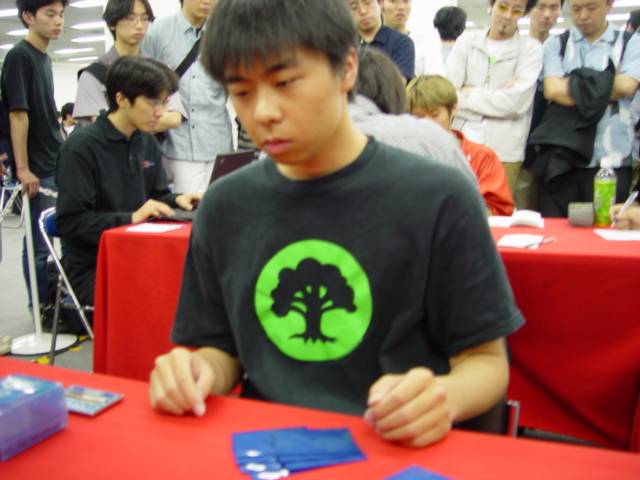 The second game saw both players take a mulligan. Okamoto again led off with a second turn Nomad. Ootsuka came up with a Barbarian Lunatic, and traded with the Nomad. Okamoto played the Mystic Zealot, and Ootsuka's deck stalled again, not producing the right lands. Staring at a hand of spells he couldn't cast, Ootsuka passed. Showing that UW can be more than just defensive, Okamoto made a Mirror Wall and started swinging, keeping up the pressure by playing Commander Eesha. Ootsuka tried to put up some resistance with Jeska, Warrior Adept, trading with the Wall. Although Ootsuka was eventually able to produce some blockers and stabilize the ground, he was already down to 6 life. Unable to remove Eesha, he scooped.