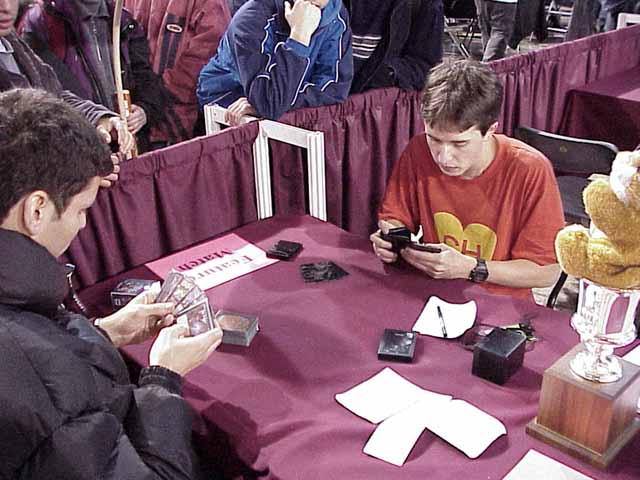 Round 11 featured Rafaël Le Saux (7-2-1) of Chile versus Eduardo Simao (8-2) of Brazil. Rafaël was playing the standard Accelerated Blue, but Eduardo had brought a surprise to the tournament: a German Covetous Dragon deck, undefeated so far through four matches of play.

Eduardo began the first game with an unsteady start, missing land drops on the second, third, and fourth turns. For a moment, he managed to get back into the game with Grim Monolith, Thran Dynamo, and Masticore. But Rafaël played a Masticore of his own and topdecked a Treachery to steal the other one.

Rafaël used Stroke of Genius to help pay the upkeep on both Masticores, plowing through the Covetous Dragon that Eduardo used to defend. Eduardo tried to save himself with a final Wildfire, but Rafaël remembered to regenerate, and Eduardo conceded the first game.

Rafaël spent a long time considering his opening hand in the next game, which consisted of Grim Monolith, Annul, Rishadan Port, and four islands. He finally decided to mulligan, but was horrified when his six-card hand contained no land. He kept his five-card hand without even thinking.

Eduardo played four Fire Diamonds in the first few turns, but had nothing useful to spend his mana on. It was only after Rafaël played Masticore on his seventh turn that Eduardo began to pull Covetous Dragons from the top of his deck. But Rafaël had all the answers: Treachery for the first, Rewind for the second. Eduardo succumbed a few turns later and Rafaël won the match 2-0.