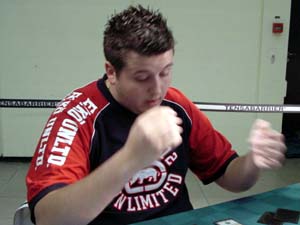 into this round, Benedikt has a loss and two draws while Mario has two losses. They are both running Elf and Nail, and apparently are both majoring in law.

On the other feature match, Kai and Bevand are whining about having no coverage. Sorry MmmBrahs.

Benedikt wins the coin flip but has to paris, and checks the first few cards to make sure he made the right choice. Mario keeps his seven and Benedikt has the first turn Bird while Mario "only" has a Symbiote. Benedikt gets out another Bird and his own Symbiote on his next turn and Mario just swings for one. Benedikt has no third turn play though while Mario has an impressive turn three Shaman that gets a "Wowww" from Benedikt who has no fourth turn play either. Mario adds another Shaman to the board and just bring the beats in for a few turns, while both players are holding Vernal Bloom and Tooth and Nail in their hand, putting Benedikt down to 9 then to 5 but Benedikt gets to trade his Herald with Mario's Symbiote this time getting a Wood Elves in the process. Mario gets to cast Tooth and Nail first and just gets two Triskelion to pings Benedikt to death.

Both players keep their opening hand this time and Benedikt has the first turn Bird again, so does Mario this time. Benedikt gets a Wood Elves as well as a Symbiote on his second turn..... so does Mario who goes one step further bouncing his Wood Elves untapping his Bird to cast second Bird. Bendikt then plays his Wood Elves again and an more impressive Sharpshooter, which gets imprinted by a timely Duplicant on Mario's next turn. Benedikt then casts the Wood Elves again and adds a Vine Treillis. Mario gets more lands as well, even more actually as he gets a second Symbiote on board and uses it to cast the mighty elf for the second time this turn. Benedikt is the first one to cast Tooth and Nail with entwine this time though. He gets Khamal and Colossus and Mario just scoops as he fails to draw any action.

Mario keeps his hand while Benedikt doesnt seem as pleased with his but still keeps anyway. 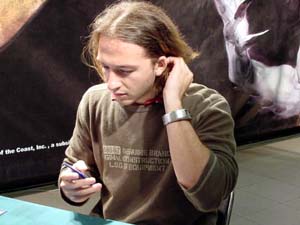 Mario has a turn one Symbiote and no second turn play while Benedikt only has Skullclamp in play by turn two. Mario has the Wood Elves and a second Symbiote but Benedikt plays a Sharpshooter and Mario can only get one more land on his next turn from his little combo before Benedikt shoots his whole team down. Benedikt has no turn four play and chooses to not sac his Sharpshooter which seems questionnable has Mario now has six land and will have acces to Triskelion and Duplicant on his next turn. Sure enough, Mario has the Triskelion, a new sherif in town, who gets destroyed by Benedikt's Shaman, not before getting shot down itself. Mario then gets to entwine Tooth and Nail and things look pretty grim for Benedikt as his board consists of five lands and a Skullclamp. Mario gets Triskelion and Colossus. Benedikt draws and extends his hand.