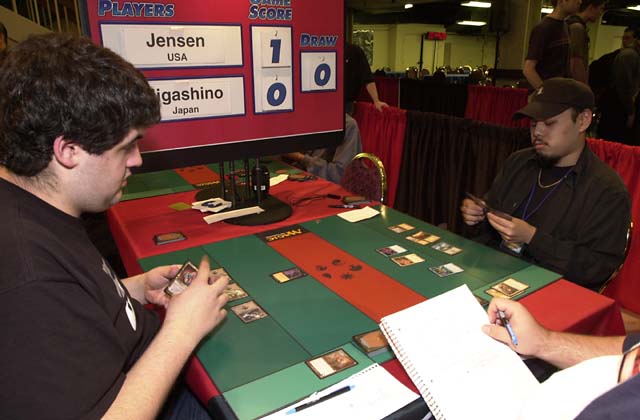 In a Mark Rosewater special, all four matches this round feature top Japanese players. Billy Jensen found himself squaring off against Grand Prix Hiroshima winner Masayuki Higashino. Higashino is playing a controllish blue/black/white deck with multiple tappers and Probes, while Huey is playing the ultimate in creature destruction and quick beats - "red/black attack."

Game 1 was fairly one-sided. Higashino played a second turn tapper that was immediately sent to the graveyard via Scorching Lava. Huey's next play was to start going into the Red Zone with a Sparring Golem, which Higashino couldn't afford to block properly. Huey's curve over the next few turns was amazing. He played a Kavu Runner, a Phyrexian Reaper, Hypnotic Cloud with the kicker (netting a Stand/Deliver, Benalish Lancer, and a land), and a Plague Spores on Higashino's lone Plains and a freshly cast kicked Faerie Squadron. He followed that up with a Tribal Flames to remove Higashino's Shoreline Raider, and a second Kavu Runner. This game took less time to play than the shuffling that occurred before the round had begun.

Jensen wasn't done being aggressive. Game 2 was much of the same as Game 1, with a few tappers coming to play on Higashino's side of the table, with a pair of Kavu Runners and a Duskwalker on Huey's side. Huey simply removed every blocker that Higashino could play, and used hand destruction to wreck Higashino's hand. Both players were playing primarily for the short game, and in that race, Huey will win every time.