In a matchup of seasoned pro tour Veterans, Shawn Keller and Matt Linde were both playing for a chance at the top 8. Keller's Tradewind Survival deck faced off against Linde's Counter-Oath deck. 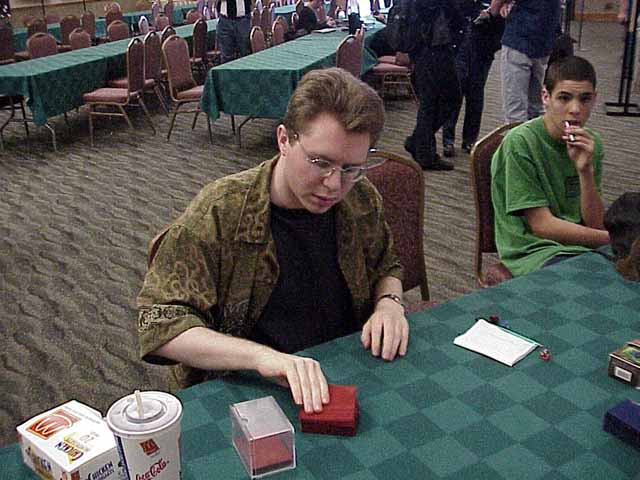 Keller started off strong laying lands, Wall of Roots and 2 Tradewind Riders during the first 4 turns. Linde laid his own lands, a Sylvan Library, and attempted to cast an Oath of Druids which was Force of Willed by Keller. Keller systematically started to bounce Linde's lands starting to control the table. Linde's second try at an Oath of Druids was counterspelled by Keller, but Linde was ready this time with a Force of Will pitching an Annul.

Keller seemed unfazed though as he continued on bouncing Linde's lands, casting a Wall of Roots and a Morphling to add to his ever growing army. Linde activated his oath dredging up his own Morphling and continued laying lands that Keller bounced. 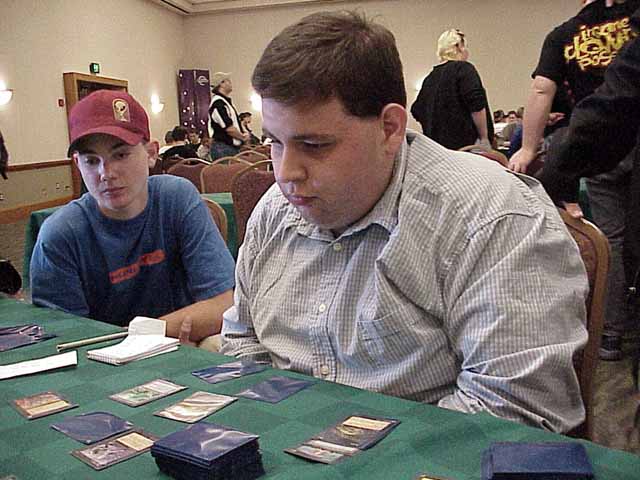 The critical point in this match came in turn 8. Keller bounced some lands, ignoring the Oath of Druids on the board and attacked with his Morphling. Linde blocked and let his Morphling die while Keller spent one mana keeping his alive. During Keller's end step, Linde impulsed and then during his upkeep, oathed. Going through basically his entire library save 5 cards, Linde oathed up a Crater Hellion which devastated Keller. Keller looked visibly shaken as he didn't think that there was a Crater Hellion in the deck. Keller made his Morphling a 1/5 and bounced one of his Tradewinds back to his hand, but lost the other Tradewind Rider, and both Wall of Roots.

Keller still had a Morphling on the table though, while Linde had an unpaid echo costed Crater Hellion. Keller attacked with his flying Morphling and then cast a Survival of the Fittest. Linde casted and used a Seal of Cleansing on the survival. Keller attacked with the Morphling once again and attempted to cast a Deranged Hermit for the win. However, Linde countered with a Force of Will pitching a Brainstorm. Linde then oathed up a Morphling and then used a Wasteland on Keller's Tropical Island.

Linde then proceeded to lock the game casting Gaea's Blessing turn after turn pulling Counterspells and Wastelands into his library and drawing them. Keller shortly conceded with no real way to win against such recursion.

With only 15 mintues left in the round, Keller had to work quickly in order to beat Linde. Keller started off land light though laying 2 islands before alternatively casting Land Grant for a Forest showing a hand of 2 Force of Wills, 2 Survival of the Fittest, and a Back to Basics. Linde seemed unfazed though, laying a volcanic island. Keller dropped a forest on the board and Linde cast Impulse during Keller's end step turn and followed that up by playing a Tundra.

Keller then played a board while Linde casted a Brainstorm. What followed was a classic counter war with Linde attempting to cast an Oath of Druids. Keller counterspelled which in turn Linde pyroblasted. Keller then Force of Willed pitching another Force of Will. Linde had the last say though when he Forced of Willed Keller's pitching a Counterspell.

With Linde essentially tapped out and only having 3 cards in hand, Keller attempted to cast a Back to Basics. Linde was ready though with his second Force of Will pitching a Brainstorm. Linde then oathed up a Crater Hellion hitting a Gaea's Blessing on the way down.

Keller played a Survival on the next turn, which was okay with Linde. Interestingly enough, Keller decided not to use Linde's own Oath of Druids to call up a creature. This may have been Keller's downfall as after the Crater Hellion passed away, he had no more chance to use the Oath of Druids. At this point, Keller's chance at a comeback seemed remote. Several turns passed for both players as Keller started using Survival, first getting Squee, Goblin Nabob and then filling his hand with creatures. After several turns, Keller attempted to Emerald Charm the Oath of Druids, but Linde had a Counterspell ready. Keller countered with his own Counterspell, which Linde stopped with a Pyroblast.

The game was essentially over at that point as time ran out and Linde had established control of the game with counters in hand and an Oath of Druids on the table.