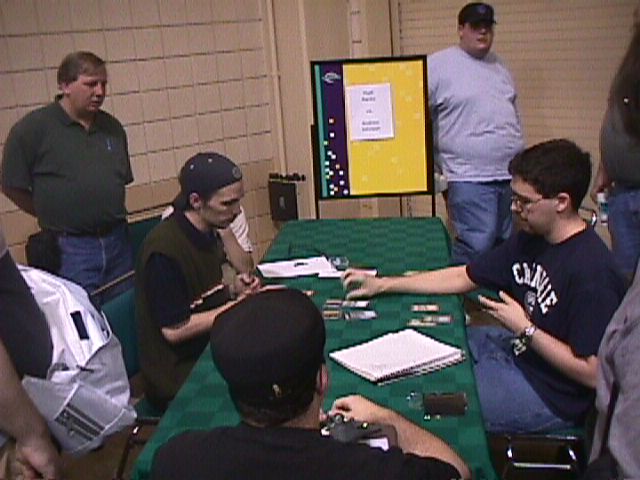 Matt Ranks vs. Andrew JohnsonMatt Ranks arrived at the feature match table first, and commented ominously, "This one ain't gonna be close, and I'm not saying that because I think I'm gonna annihilate him." Andrew then sat down and spent a couple of minutes replacing the warn sleeves on his cards. Shortly thereafter, the two competitors flipped a coin to decide who would play and who would draw. Andrew won the coin flip, prompting more words of portent from Matt. "Ok, we can go on to game two now," he quipped.

Andrew chose to play first, but took a quick mulligan. He kept a two land hand post-mulligan, while Matt decided that his opening hand was just fine. Matt's Red/Green deck started with a quick Nimble Mongoose, signaling that he was looking to go straight for the jugular. Andrew answered with a turn two Angelic Wall, but failed to draw a land. Matt added a Chatter of the Squirrel token to his growing army. He attempted to capitalize on Andrew's mana situation on turn three with a Krosan Avenger, but it was removed from the game with a Syncopate. 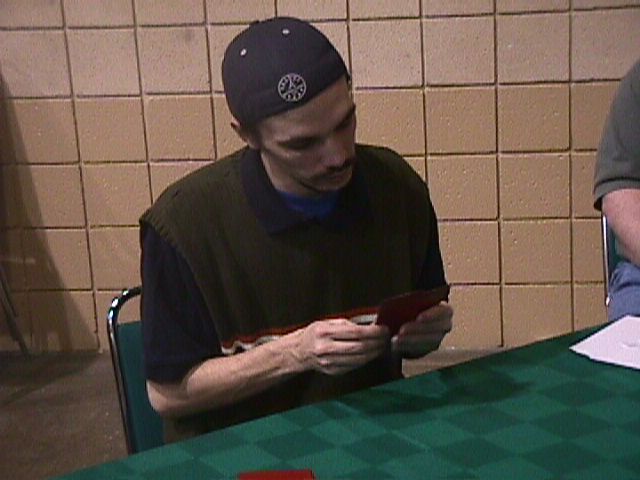 Matt RanksThe following turn, AJ enchanted his wall with a Psionic Gift, allowing him to clear Matt's board down to the single untargetable Mongoose on Matt's turn. Matt countered by bringing an elephant into play with Elephant Ambush, and looked to break through the following turn, until a minor rules situation occurred.

Andrew had a Plains and an Island in play, while Matt had 3 Forests, and 2 Mountains. Matt attacked with his elephant token and Mongoose, and Andrew blocked with his Gift'ed' Wall. Andrew asked Matt if he had any effects, and Matt said yes, and Thermal Blasted the Angelic Wall. Andrew responded by Aether Bursting the token creature. Matt thought that this exchange took place after combat, and that he had killed the Wall. Andrew informed him that damage had not been put on the stack yet, and it was still during the combat phase. The head judge, Thomas Pannell, was called over and ruled that indeed combat damage had not yet been put on the stack and the Wall was saved.

Matt quickly composed himself, but Andrew's Blue/White deck drew a third land, and he summoned a Puppeteer, Matt answered with a Wild Mongrel, but after the Mongrel was killed by a blocking Gallantried Angelic Wall, Matt conceded the game, having had no threats left in his hand, and facing down a tapper/double Psionic Gifted Wall under the control the player with a hand full of answers.

This game started very differently from the first, with both players achieving a good mana curve. Andrew's first play of the game, a Patrol Hound, was quickly sent to the graveyard by a Firebolt. Trying to stay on the offense, Andrew brought an Auramancer into play the following turn, which attacked past a lone Ember Beast on consecutive turns. Suddenly, Matt seemed to be in a bad position, even though he had played a land each turn-because they were all Mountains! An Aven Fisher on AJ's side brought even more pressure to the game. 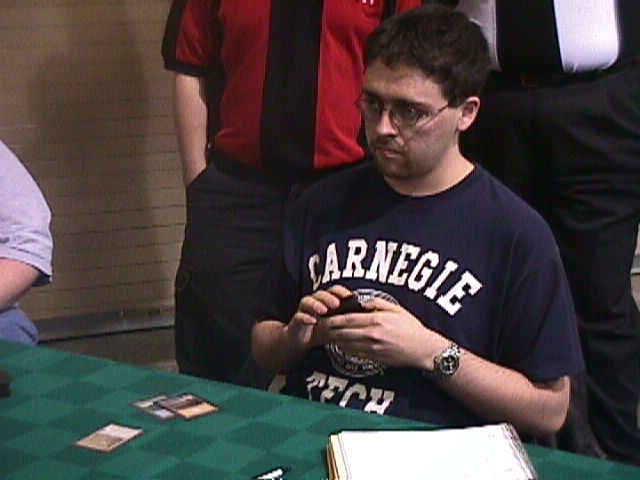 Andrew Johnson Matt turned things around quickly by casting a Flame Burst on the Auramancer, and summoning a Mad Dog, which would allow his Ember Beast to attack. Andrew played a Puppeteer the following turn, and swung with his flyer. Matt brought five damage across the red zone, but Andrew prevented four of this damage with an Embolden. Ranks then played his first Forest of the game, summoning a Springing Tiger.

Andrew showed the power of White and Blue in Odyssey, preventing the next 12 damage dealt to himself via consecutive and flashbacked Emoldens while continuing to attack with his flying creature and stall with his tapper. Though Matt tried to stabilize the game with a couple of squirrel tokens, he could not keep up with the delaying aspects of Andrew's deck, and soon thereafter succumbed to the Aven Fisher backed by a second Auramancer.