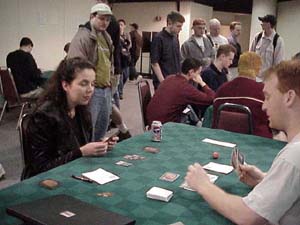 "In case anyone wants to know, the lipstick I am wearing is Urban Decay and Manic Depressive." -Michelle Bush
"Same." -Eric Kesselman

This feature match presents two Top 8 finishers from Grand Prix New Orleans. New York's Eric Kesselman is considered to be an excellent drafter by just about everyone at Neutral Ground NY, while Michelle Bush is the official Magic Diva of Your Move Games, Boston. (update: Eric Kesselman has just claimed to be the official diva of Neutral Ground). Thus, this is also a New York-Boston grudge match of sorts.

Kesselman opened with a Thornscape Familiar, but had his second creature - a Quirion Sentinel - Prohibited. Bush summoned a Sparring Golem.

Kesselman Cloaked his Familiar, sending it in. Bush did not have a bounce spell in her hand, so she tapped out to summon a Trench Wurm. Kesselman played a third land type and used Tribal Flames to kill the Wurm. He was holding a handful of removal, but needed a black mana source to cast the rest of them.

Kesselman's next draw was Harrow and he retrieved a Swamp during Bush's end step. "Oh," commented Kesselman as he drew a Strength of Unity. "I am going to go with the proverbial Eggs-in-the-Basket strategy" - and enchanted the Familiar with it. "You would think a Black-Blue deck would be able to deal with that," said Bush. "Do those colors have bounce spells?" asked Kesselman.

"If only I draw a Thornscape Familiar, the victory is surely mine." -Eric Kesselman
"Same." -Michelle Bush (playing U/B)

Kesselman took a mulligan this time. However, he was again able to summon a Turn 2 Familiar, and demanded that Bush concede the game. Instead of doing that, she summoned a Phyrexian Slayer. 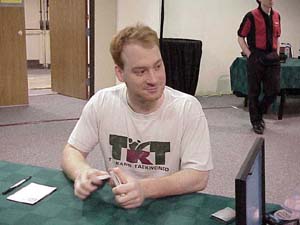 Michelle kept daring Eric to "Cloak it up" and he did - casting Armadillo Cloak on the Familiar. She then cast a Hunting Drake, sending the Familiar onto the top of his library, and Cloak into the graveyard.

Bush gathered an impressive air force on her side of the table - Slayer, Battleflies, Faerie Squadron and a Hunting Drake. Kesselman played a Kavu Chameleon and the Familiar. Michelle did some math, realizing that she could deal exactly 18 points of damage with her flyers in two turns (Eric was at 18). She attacked with everything, having enough mana to pump the Battleflies but only for 1, summon a Sparring Golem, and still have Recoil mana untapped. Kesselman was now down to 10 life.

Kesselman's hand consisted of Strength of Unity, Darigaazs' Charm and a Forest. He chose to cast nothing, attacking with his two creatures instead. Michelle blocked the Familiar. An all-out attack by Bush brought Kesselman down to two life. His own attack was dealt with by a Recoil as it sent the Kavu to Kesselman's hand, and Kesselman to scoop.

"You said you had no bounce spells. You swore!" -Eric Kesselman

Eric Kesselman: "Deck, I know you are not good, but we can win one more game!" -Eric Kesselman
"No, Deck, no." -Michelle Bush

"Hunting Drake. Who plays with Hunting Drake? Did you side that in?" -Eric Kesselman
"That card is so bad." -Michelle Bush

Kesselman peeled the Familiar off the top of his library, casting it on turn 2 yet again. It was not nearly as good this time, as Bush summoned a Vodalian Zombie. Kesselman cast a Primal Growth, asking Bush if she wanted to Force of Will. She replied, asking him if he wanted to pay kicker.

Aurora Griffin and Volcanic Imp were the next creatures played. Kesselman did not want to risk casting a Strength of Unity yet. He chose to attack with both creatures instead. The gamble worked out, as Bush chose not to block either creature.

She preferred to race. And to summon a Phyrexian Bloodstock that could become a major problem for Kesselman later in the game. Bush emptied Kesselman's hand with a Hypnotic Cloud and attacked with all. Kesselman used the Griffin's ability to make his Familiar white and let it trade in combat with Vodalian Zombie. 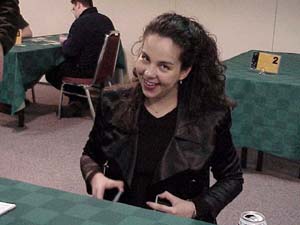 Bush felt very comfortable as she had an Exclude in hand. Kesselman was holding a Stone Kavu and a Magma Burst, trying to figure out the best way to play. He chose to cast a Stone Kavu, only to have it Excluded.

Between an Exclude cantrip and a draw step, Bush got a Spite/Malice and yet another flyer. Things were looking very good for her indeed. She chose to attack with both creatures, trading her Imp in combat for Aurora Griffin and bring Kesselman down to three. She seemed about to cast a Slayer, but at the last moment chose not to. This was certainly a good decision based on Kesselman's hand, though she did not know it yet.

Kesselman passed the turn and attempted to Magma Burst the Bloodstock in Michelle's upkeep. She Maliced it.

"I am going to counter target non-creature spell." -Michelle Bush
"I am gonna lose." -Eric Kesselman