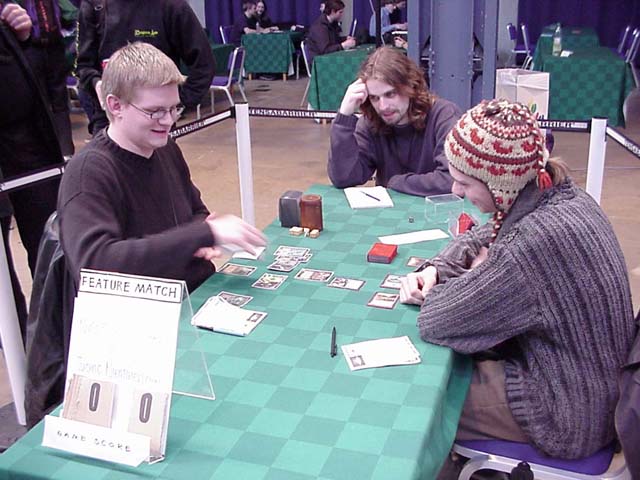 Niels was playing a green/black deck with splash for blue! - Not a common deck archetype, but he was having a little difficulty drafting u/b in between two u/b players.

Tuomo had what he called a 'broken' u/w/b deck.

Niels won the toss and elected to play first after quite some consideration, but it was Tuomo who made the first play with a second turn Ravenous Rat hat forced Jensen to discard a swamp. With easily enough mana in hand though Jensen replied with a Morgue Toad as his opponent looked at his land, slightly confused at the black and green mana. Nieminen sent a Tower Drake in to help his Rats out, but they both ended up blocking the Toad after it became Sisterly Strong. With all the non-land permanents now swept off the board and both players on a full quota of life, Tuomo rallied with a Glimmering Angel, which was replied with by means of a Phyrexian Slayer on the other side.

From this point onwards the game gradually deteriorated for Jensen. It all started with a Probe with kicker followed by a Stormscape Familiar and a Razorfoot Griffin. A Duskwalker with kicker was all that Niels had left to try and race the 5 power worth of flying creatures, but a Tsabo's Decree naming 'minions' killed not only the Duskwalker, but the Slayer as well. That was game.

This must have been the most comic game I have ever born witness to. Niels announced that he "could not possibly lose" although from his first few plays it rapidly became obvious he was kidding around.

Turn one Maggot Carrier. Yeah - beats. The game continued to go 'janky' as Nieminen then laid a Vodalian Merchant and a Ravenous Rat, whilst Jensen made a Cavern Harpy, relayed his Maggot Carrier, then made a Root Greevil.

Niels' Cavern Harpy proved to be most useful as it not only fended off a Marsh Crocodile with the Greevil for a while, but it also attacked for two each turn then laid itself and the Maggot Carrier again! 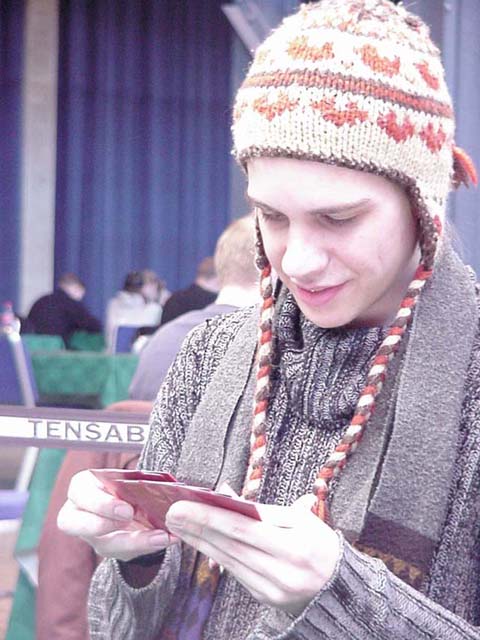 As if all this was not enough bounce for one day Tuomo Repulsed the Root Greevil, made a Cavern Harpy of his own and then spent the next few turns bouncing his Ravenous Rat back and forth to empty Niels' hand. The finishing blow came when a THIRD Cavern Harpy came into play, this one being Tuomo's again, followed by a Silver Drake. At this stage the Fin had five cards in hand whilst the Dane had none. The board situation looked grim as Jensen's Cavern Harpy, Root Greevil, Duskwalker and Phyrexian Bloodstock faced down a Ravenous Rat, two Cavern Harpies, a Silver Drake, a Maggot Carrier (yes they were both playing them!), a Marsh Crocodile and a Vodalian Zombie.

Trying some last minute trickery by bouncing the Bloodstock back to his hand to kill the Silver Drake Niels realize there was nothing he could do to stop the onslaught - the early card advantage the Finn had obtained had wrecked him.