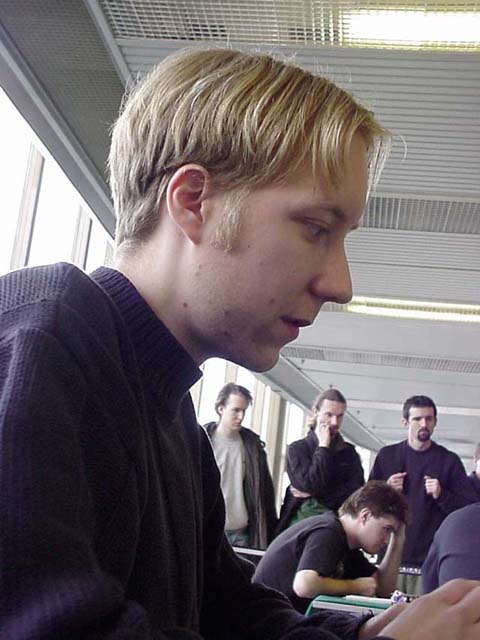 These players started the day with a lowly position in draft pod number seven, but from there they have gone 2-0 so they are now on 8-2 and in contention still for the top eight. The winner of this match will be in a great position to make a good finish in the event, whereas the loser would have to win all three matches in their second pod to have a chance to make top eight.

After a desultory attempt to arm-wrestle to see who would play first, they agreed to a diplomatic draw and flip a coin instead. Mattias won the flip and decided to play, but was forced to take a mulligan.

He could still cast a turn three Kavu Aggressor, and a fourth turn Caldera Kavu. Olivier's draw was slowed down by the fact that he had to use Crosis' Catacombs to gain access to blue mana. He summoned a Riptide Crab and an Ardent Soldier, which he used to double-block the Aggressor.

Mattias killed the Soldier and summoned a Kavu Monarch as well, attacking with both Kavu on his next turn. The Riptide Crab jumped in the way of Caldera Kavu, and Olivier's Dream Thrush was Singed.

Still behind on land Oliver could only play another Dream Thrush, and he was attacked down to nine before he drew a way of removing Kavu Monarch with Agonizing Demise. By then, though, Mattias had found a Lava Zombie as well, and since he had Terminate for Olivier's Wayfaring Giant, and enough mana to pump the Zombie and deal nine damage, Olivier conceded.

Olivier wanted to go second again, and Mattias was happy to oblige, but he had to mulligan again, saying as he did so "I don't know how you do it. You're pretty amazing", referring to Olivier skill at shuffling him to a terrible hand.

The Frenchman cast Hobble on the Lava Zombie, and attacked for three. Next turn the Firescreamer and Ardent Soldier traded, and Terminate traded for Ruel's Wayfaring Giant.

Olivier cast Prohibit on Urborg Shambler, but didn't deal with a largely irrelevant Rogue Kavu. He had a lot of land in his hand by this point, but still was able to Agonizing Demise a Caldera Kavu. He found a use for his extra land as well - discarding it to Thunderscape Battlemage's kicker ability.

When he summoned Dralnu's Pet, Jorstedt was ready with Plague Spores to take it out, and Olivier had to sacrifice two more mana to a Magma Burst when Mattias played Kavu Monarch.

Now Olivier began to draw a few more spells, first using Hunting Drake to return Rogue Kavu to the top of the Swede's library, and then, after the Drake was Soul Burned, cast a Stormscape Apprentice.

These two small creatures brought Mattias to six, and without an answer he scooped when Olivier played Wayfaring Giant as well.

But still he could once again get off to a good start, playing a second turn Shivan Zombie, which attacked and was Repulsed on Mattias fourth turn. Olivier still didn't do anything, but when Jorstedt recast the Zombie, Ruel was ready with a Hunting Drake. 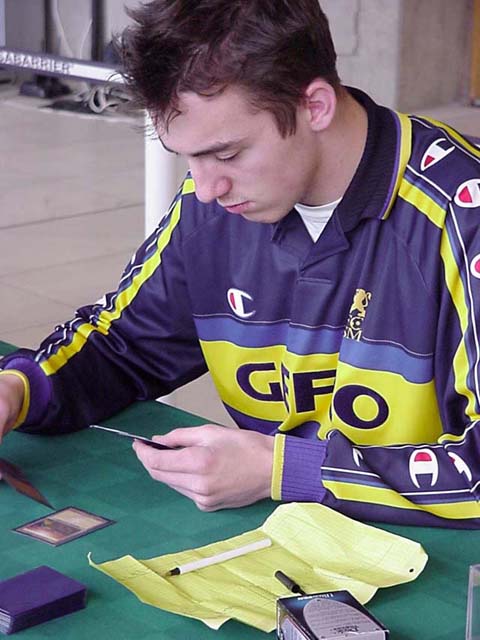 The Drake attacked, and a Wayfaring Giant was once again Terminated, but Olivier was firmly in control, playing Probe with kicker before summoning a Stormscape Apprentice. Mattias on the other hand could manage only a less than satisfactory Rogue Kavu.

The final straw for Mattias was when Olivier Repulsed his Hunting Drake, allowing him to return the Shivan Zombie to the top of Mattias' library, and at this Mattias conceded.