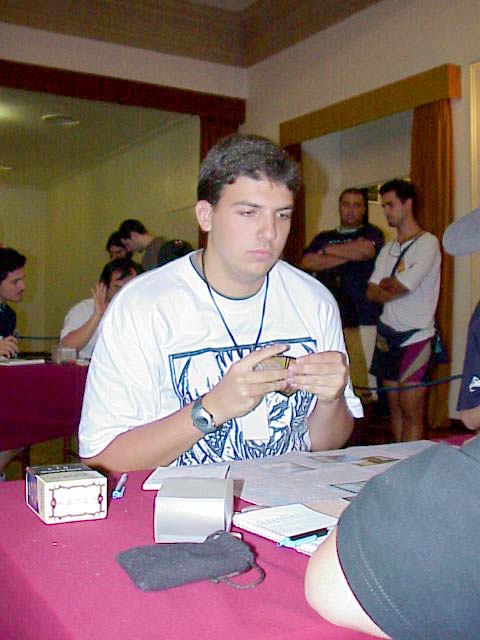 Ricardo must be really tired since he had no byes and fought his way to a 8-2 result so far. Besides the obvious struggle for the Top 8 places these two are also fighting for top honors amongst the flagged players. The round started and they traded good luck wishes and let the Brazilian friendly banter begin.

Barros opened with a Benalish Trapper, promising a controllish game. He followed this up with a Sparring Golem. Rafael's first creature was a Kavu Recluse. Then the pace picked up: Barros got a Silver Drake while Santos dropped a Nightscape Familiar and a Viashino Grappler.

The Grappler traded with the Golem but the artifact's spot on the team was quickly filled by Sapphire Leech. A Shivan Emissary came in and got rid of the Drake and Ricardo played a Obsidian Acolyte to slow Rafael's offensive options. Santos' army increased with a Darigaaz's Attendant and Ricardo's Trapper came back into play.

Despite all these changes Santos' creatures were still trading blows with the lonely Leech. A Tower Drake briefly entered play, trading with the Leech, and Ricardo could now cast Blue spells again. His Obsidian Acolyte gained Wings of Hope providing an amazing blocker for the horde across the table.

They finally took a few turns to breathe, mainly due to Ricardo's growing wall, now with two Trappers. Rafael was still waiting for his Blue cards to show up when Ricardo got a Crimson Acolyte to completely shut him down! He now had two tappers and a Acolyte for each color so Rafael needed to find a really sneaky way around it.

The Silver Drake got Recoiled but came back announcing the start of Ricardo's offensive. Slowly, yet surely, the Drake took its swings through the open air. By Rafael's look you could see that he had no solutions. He jokingly threw a Recoil and a Plague Spores at the Drake but Barros' obviously remembered the Acolytes.

While sideboarding Rafael told us that he drew 15 of his 18 lands in the first game. They then fell into a deep silence while sideboarding, no doubt concentrating on the options they had and trying to keep calm about how far they could go today. Ricardo had to take a double mulligan and settle for a five card hand.

He still opened up with a Tidal Visionary on his first turn and started swinging immediately while Rafael again played land after land. With Barros trying to calm him down he finally played a Phyrexian Bloodstock only to have it Hobbled on the next turn. Then he used a Implode to blow Ricardo's only Plains sending the match into a new round of trash talking with Ricardo calling the card "really bad" and Rafael pointing out that it worked great in that situation.

Ricardo bounced back by playing another Plains and a Benalish Trapper that was taken out by a Plague Spores that also took out the lonely Plains. But Barros had more Plains coming and he played another. All that Santos could muster was a Hunting Drake and his opponent again showed the defensive nature of his deck by playing a kicked Ardent Soldier. 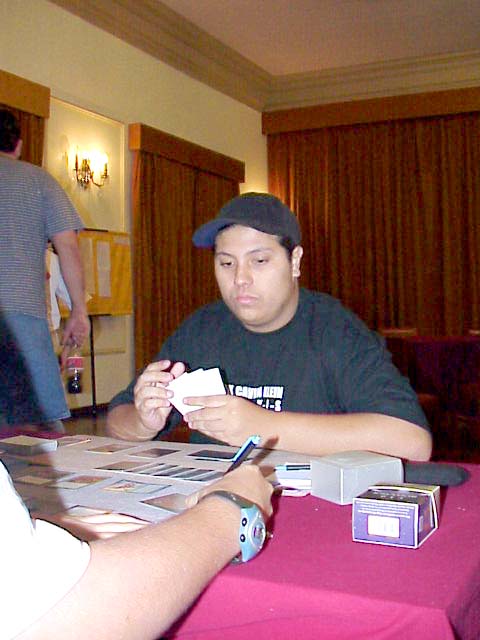 That Soldier soon found a friend called Benalish Heralds, the better to help Ricardo recover from the mulligan's card disadvantage. Thankfully the Heralds are big or it would have been an excellent target for the Magma Burst that instead burned the Visionary and Soldier. Size didn't matter, however, when he was Terminated a few turns later before he could influence the game.

A Stormscape Master came in and Rafael had to read it to know what it did. Basically, it gave Rafael a world of trouble because its white ability messed up his removal plans. Rafael got a second Bloodstock but again Ricardo had the answer in the form of a Benalish Trapper. He also added a Disciple of Kangee a few turns later.

The game then slowed to a glacial pace as Rafael desperately fought to find a way past the defensive barrier that Ricardo had so carefully built. He kept trying to attack with the Drake and the Bloodstock but only the Drake managed to squeeze by. The Disciple started swinging with the tappers' help and then a Silver Drake was brought in to rule the skies, or at least to stop the Hunting Drake.

That would have been a great plan if a Plague Spores hadn't taken it out. Rafael's incoming Hunting Drake was then faced into another Hunting Drake across the table but a Recoil made sure it could finished what it had started so long ago.

Ricardo was the first to blink with a second turn Sapphire Leech. Rafael quickly answered with a Slimy Kavu. An Obsidian Acolyte from Ricardo's side meant Rafael could keep swinging but he needed to find a Red answer or his Black removal would soon be useless.

Ricardo played a Ardent Soldier to stop the Kavu but that forced him to tap out so the Acolyte could not save it from a Malice. The Acolyte grew Wings of Hope further increasing Rafael's troubles. He got a Phyrexian Bloodstock but the big monster could not get past the Acolyte and a Silver Drake came in to put Rafael dos Santos on a fast flying clock.

Santos played a Kavu Recluse hoping to swarm Barros for those last elusive seven points. He sent everything in and a freshly casted Sapphire Leech jumped in the way of the Bloodstock. Ricardo was down to two life points but he kept swinging with the Acolyte killing Rafael in the next turn. A glimpse at the top card of Rafael's deck revealed a Magma Burst that would have finished Ricardo. Lucky or unlucky? Depends on which side you're on.