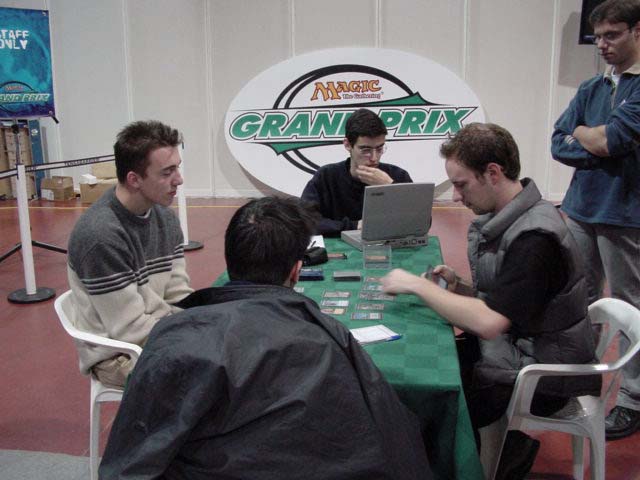 They are back in the feature match area producing the same amount of noise and trading jokes left and right. They might be great pros but they surely can't speak Spanish. Between the two of them, and with the valuable help of Raphael Levy, they must have stabbed Cervantes' language a million times while they sleeved their decks.

"Yo te amo mio amigo" - Was Olivier's kindest remark to Ryan Fuller. I can't print the rest without being arrested for violent profanity. That, and because I was asked to withhold the gory details. Not really asked, more "threatened" . . .

After the round was over they kept playing because they both could use the practice and it was interesting to see them commenting on the cards they were playing and how high, or low, they should be drafted. They also determined that whoever sits facing the clock wins the rounds played between the two of them. Could this be a decisive factor in the top 8 :?

Ryan opened with a Stormscape Familiar, which was bounced to play the massive Marsh Crocodile, discarding a Ghitu Fire! Olivier had played a Shoreline Raider the turn before and he discards an island. Ryan replayed the Familiar and sent the Crocodile in to do some damage.

Ruel's Ordered Migration for three couldn't really compensate Ryan's Crocodile and the Duskwalker he played the following turn. A much better answer was the Olivier played a Benalish lancer with kicker to stop the Crocodile induced bleeding. That would have worked but Fuller used a Repulse to bounce it away and sent everyone in.

With a Reckless Spite still in his hand ("full of bombs", in his own words) Ryan knew we was about to win the game. Olivier stared at the Plains he had just drawn for quite a while with an amusing look before conceding.

Olivier first plays was an Skyscape Familiar while Ryan used a Vodalian Merchant to draw a card discarding an island. He joked about being mana-screwed and that he shouldn't have discarded the island and for a second the Frenchman took it seriously. Ruel played a Prison Barricade and Fuller did the Crocodile thing again discarding a swamp while Olivier grudgingly threw away a swamp. The Crocodile got bounced by a Repulse pushing Fuller back to square one. 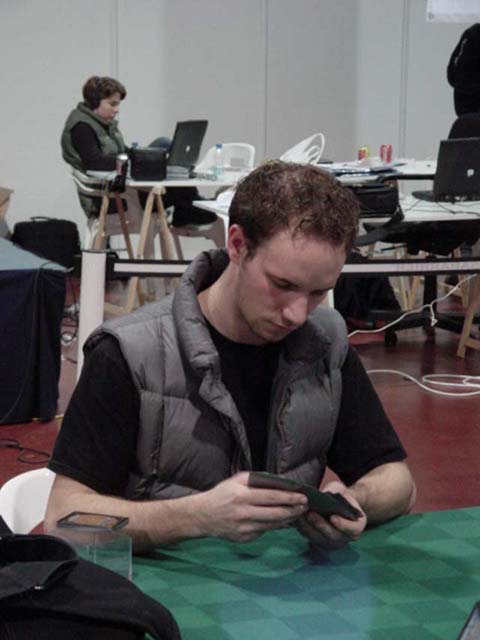 After replaying the Merchant and doing his trademark Ghitu Fire discard, Ryan played Dranul's Pet (no kicker). That was no match for Ruel's Vodalian Serpent (with kicker) that joined the fray a turn later. Suddenly the Pet donned a Sleeper's Robe and got a Ryan a free card and the Serpent was bounced by a Repulse.

Olivier replayed the Serpent and after some consideration Fuller played a Ravenous Rats (getting rid of an Artic Merfolk). Finally the Serpent was able to attack, along with the Barricade but a Death Bomb sent the confused snake into the graveyard, along with the sacrificed Merfolk.

An Allied Strategies got two extra cards into the Frenchman's hand but Fuller did not intend to be slowed down. He played a Molting Harpy and replayed the rat (getting a Vodalian Zombie in the process).

Fuller flashed his hand for a second and Ruel quickly conceded. After a quick look at his deck Olivier told Ryan he only needed ten turns to get control of the game.