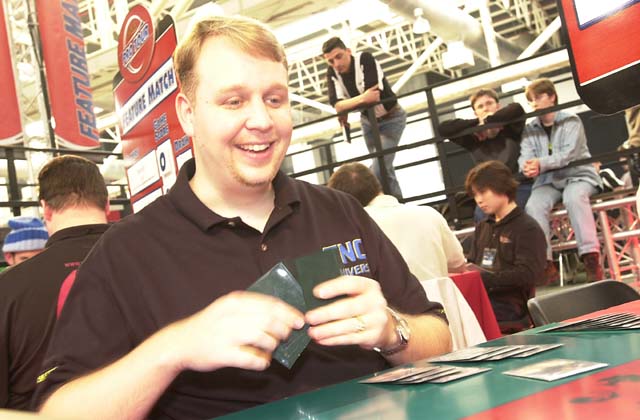 This was by far the most exciting match I have had a pleasure to watch in recent months. Pustilnik and Johns were still in contention for the Top 8. Johns needed two wins and a draw, while Pustilnik would have to win out in order to make it. Both were playing straight black-red.

Johns did not draw virtually any creatures early on - a poor draw indeed as his deck featured nineteen monsters, a very high percentage, especially for this color combination. He was forced to use a Shivan Emissary to bury Pustilnik's Kavu Recluse, then trade it in combat for Rogue Kavu, and then use Plague Spores to kill another random Grey Ogre.

Johns continued to draw more and more land. Pustilnik had the opposite problem. He had three Mountains and a Swamp in play, while holding a pair of Pouncing Kavus and Urborg Shambler.

For close to ten turns, Pustilnik went on to draw 2/2 creatures and removal spells, while Johns drew a few creatures and some removal himself, always on the defensive. Johns was not taking very much damage thanks to his Nightscape Familiar, but he was forced to trade cards one for one every other turn, to keep Pustilnik at bay.

Finally, Pustilnik drew a fourth Mountain and was able to cast Pouncing Kavu. On the following turn he drew a Swamp. Casting an Urborg Shambler took out Johns's Familiar and cleared the way for the red creatures.

Johns was drawing yet more lands. He was able to Soul Burn for eight, gaining six life in the process. It was not enough though - Pustilnik cast his second Pouncing Kavu to attack for the win.

In the second game, Johns's opening draw is much stronger. He started off with a Nightscape Familiar, and cast a turn 3 Lava Zombie. Zombie traded for Ravenous Rats and Kavu Recluse. Johns then used his four mana to cast Familiar and gated it with another Lava Zombie. Pustilnik summoned an Urborg Shambler. Johns left Lava Zombie back, hoping to force a trade, as the rest of the creatures in his hand were black one-toughness guys, but Pustilnik tapped out to Soul Burn the Zombie for 2. With Shambler in play, it was enough to kill it.

Pustilnik cast a Thunderscape Battlemage with kicker, forcing Johns to discard a pair of creatures. He kept on applying the pressure, eventually getting Johns down to four life, while having Kavu Recluse and Rogue Kavu in play. Johns drew and played Caldera Kavu, with four mana untapped. This left him with no cards in hand. After much deliberation, Pustilnik attacked with both. He traded his Recluse and Scorching Lava for Caldera Kavu. 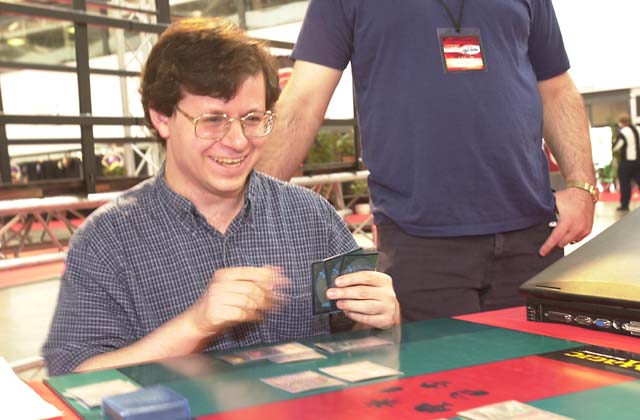 This left Pustilnik with Rogue Kavu as the only non-land permanent in play. He would be able to attack for the kill on the next turn if Johns drew a land. Johns drew a Hooded Kavu and traded it in combat for the Rogue.

At this point, MikeyP's deck betrayed him. It kept providing more land, while Johns top-decked his own Pouncing Kavu next turn and began attacking for three per turn.

Down to about nine life, Pustilnik tapped eight mana to cast Obliterate! This sent both players into top-deck mode. Once again, Johns was doing a bit better. He got up to four mana and used it to slam a Kavu Runner onto the table!

The best Pustilnik could do was play a Cursed Flesh on the Runner to buy an extra turn. He took two more damage, then had to use Assault to finish the Runner off. Johns drew more creatures. He summoned Nightscape Familiar and Apprentice. Pustilnik cast a Thunderscape Battlemage without kicker, holding those creatures off.

Johns played Hooded Kavu and send it in on the following turn. Pustilnik, unwilling to go down to one life, used Death Bomb to take out the Kavu and bring Johns down to one. He then drew Pouncing Kavu. As Johns had his two 1/1 creatures untapped, the best plan Pustilnik could apply was to pass the turn and hope that Johns attacked with both creatures and did not lay another monster.

Pustilnik cast a Bog Down instead, to take out the only card in Johns's hand. It was Soul Burn! Johns was just one mana short of burning Mike out. Had Pustilnik not killed Hooded Kavu, the game would have been over that turn. Instead, Pustilnik avoided that fate.

On his turn, Johns did indeed attack with both creatures. However, he had another monster in hand. He played a Mire Kavu drawn that turn. Pustilnik drew another land, and conceded the game.

In the third game, Johns came out hard with Lava Zombies and Caldera Kavu. Pustilnik cast a Kavu Recluse and a Thunderscape Battlemage with kicker, but Johns regained card economy by Terminating the Mage when it teamed up with the Kavu to try and block Caldera Kavu. 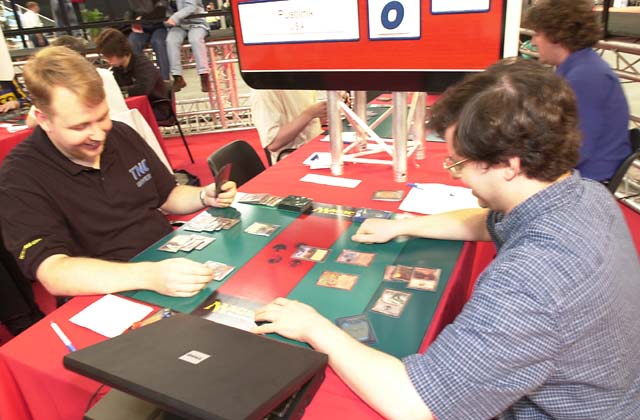 Pustilnik cast his second Battlemage and then a Cloud for one, discarding the rest of Johns' hand. However, at the moment Johns already had a Lava Zombie, Caldera Kavu, and five lands in play. Pustilnik drew and cast Do or Die, killing the Zombie. Johns drew a Phyrexian Reaper, but chose to attack Mike down to six rather than cast it.

Pustilnik had to chump block with Battlemage next turn. He went on to draw another land and conceded, unable to stop the next attack from the Zombie.