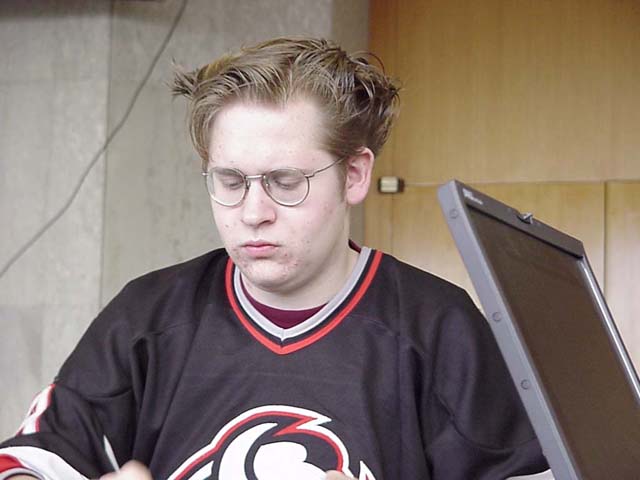 Both players started very aggressively with turn one drops like Urborg Skeleton and Tidal Visionary. The Czech player cast a horde of weenies while the Austrian cast a Glimmering Angel followed by a Sawtooth Loon. Both of the Austrian's creatures kept Martin in a defensive position. Thomas didn't seem to run out of big flyers and played a Silver Drake together with an Obsidian Acolyte.

The Czech was getting more desperate each turn and played an unkicked Probe. The Austrian kept attacking bringing his opponent down to eight life. He then replayed the Loon drawing another two cards. Martin only had three small creatures on the table and his hand with Dromar, Cavern Harpy and Hunting Drake. He then played two flyers that were promptly returned by a Rushing River with kicker to his hand. The Austrian served one last time before the his opponent conceded.

Once again the Thomas started off with a good hand playing a 3/3 flyer on his third turn. Lamr could only play an Ardent Soldier and a Volcano Imp joined the forces later. Thomas kept pounding with his flyer thereby putting his opponent under pressure. The Czech seemed to be having a better time then during the first game since he could play a Probe with kicker. He then discarded two cards, one of which was Reya, Dawnbringer.

The Austrian had two Silver Drakes and returned the freshly played Dromar to his opponent's hand with Barrin's Unmaking. Martin seemed to be in deep trouble having only three life facing two flyers that could finish him off single-handedly. He had to play something to stop two flyers and he did, by playing two flyers: Tower Drake and Sapphire Leech. His opponent attacked and he blocked one Drake with both creatures. Before damage resolved he played a Pollen Remedy to prevent one damage to his Leech and two to himself. 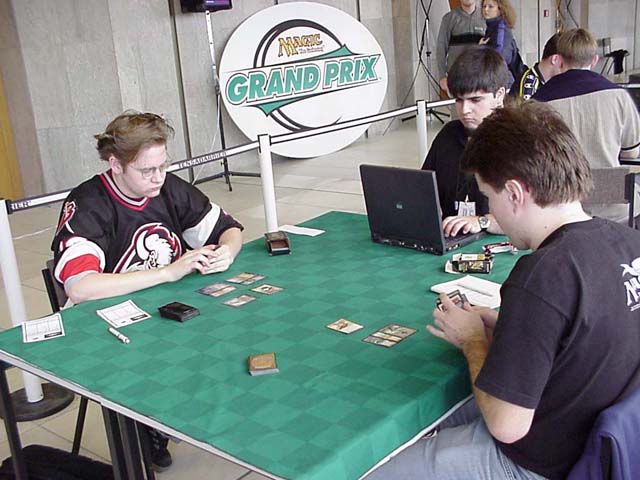 Preyer then pumped up his Drake with his Weaver thereby saving it. The Czech replayed Dromar and that was when his opponent stopped attacking.

The game got stalled for a while with both players casting lots of flyers until Martin played Recover on his Reya. The Austrian then played an Angelic Shield returned Dromar to his opponent's hand and attacked with both his Silver Drakes and his Hunting Drake. Lamr had to give away the Leech and one of his two Tower Drakes in order to live on. He then played a Hunting Drake and recast the Dragon Legend.

Once again Thomas attacked with his two flyers trying to get two more damage passed by his opponent. On his turn the Czech did not attack with his Dromar and use his ability to possibly return all of his opponents creatures back to his hand. Instead he cast Reya and started getting his dead flyers back into play.

Thomas seemed to have lost the control over the game as he only drew land and no answer for the Dragon and the Angel. Probably the first time in this Grand Prix where I got to see two legends in play. He seemed a little bit frustrated looking at the board, looking for a way through all those defenses. After using a Sawtooth Loon he found a Hobble to enchant the Dragon with. 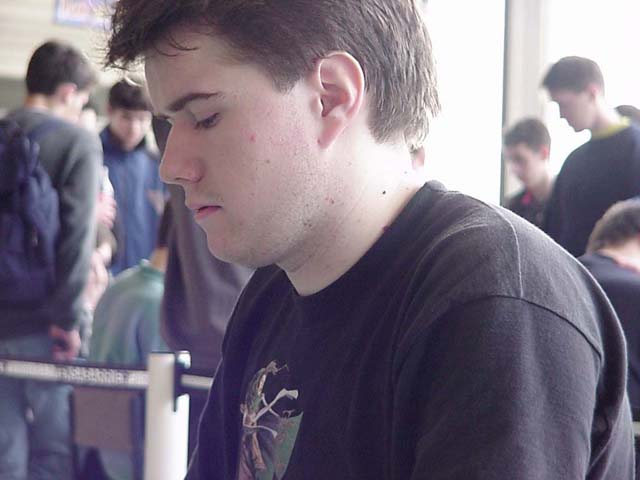 Martin had eleven creatures in play, seven of them having flying. Four minutes left on the clock and nobody was attacking. Martin only had few cards in his deck and did not know if he should attack or not. Meanwhile his opponent got out a Benalish Trapper and a Stormscape Apprentice. Preyer only had three cards in his library while his opponent had seven.

Time was called and the Czech still wasn't attacking. On his turn the Austrian grinned and played Death or Glory bringing back two creatures to block should his opponent decide to attack. The Czech then played a kicked Stormscape Battlemage, which tried to kill a Silver Drake but in the end got countered because his opponent turned his creature into black to prevent it. Martin then attacked with everything and the round ended with the final score of 1-0.