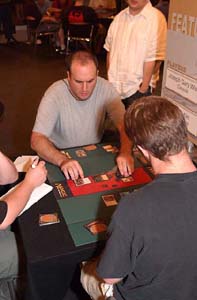 "I think I have played Ben more than any other player at high level events..." mused Gary. Never one to miss a chance for a barb, Ben asked dryly, "How's your record?"
Stuff like that rolls off Gary's back though and he merely answered, "I think 2-3-1—not sure."

The two players have both seen their fair share of success in a variety of tournament types from Grand Prix to the Pro Tour to the defunct Masters Series but today they are clinging onto a shred of hope for a shot at Sunday and a decent money finish. They were both 5-4-1. When asked how his Extended deck for tomorrow was shaping up Gary laughed and asked, "Why? Do you have one I could borrow?"

After much shuffling—perhaps a tad too much—the game was finally underway. "Good luck," Gary offered his foe and he came back with a cryptic, "Have a great time."

Ben made the first play on the draw with a Deftblade Elite. Gary took a point before he played a 3/3 Embalmed Brawler courtesy of Haunted Cadaver. Ben frowned and played a man of mystery. Gary decided to get in with his Brawler while Ben didn't have mana access to the Elite. He fell to eighteen and Ben went to seventeen. His Toxin Sliver further furrowed the younger player's brow, "This could be going better."

Dragon Shadow on the Brawler dropped the American to thirteen and Gary attempted a Lingering Death on the morph but it was Disruptive Pitmage and the spell was spiked. "Same effect," shrugged Gary.

Aven Farseer came out to hold the fort but without any morphs in sight it was going to be an uphill battle. He did take down a Toxin Sliver with a pair of Gempalm Avengers but Gary had the Reaping the Graves to get two creatures back and overwhelm his opponent.

Ben mulliganed his openers with a cry to the rafters, "Almighty! What have I done? I pray every night!!!" His second hand was more acceptable and they were off. Ben played a morph and Gary made another 3/3 Brawler with the help of a Twisted Abomination. 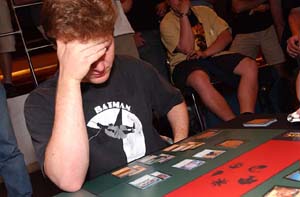 Ben did not have a fourth land and played the mighty Mistform Warchief. It did seem pretty mighty when he double blocked the Brawler on the next turn and used the Warchief's ability to become a bird and returned it with his Raven Guild Initiate. Gary played a Toxin Sliver.

The Warchief returned and Gary kept attacking. He cycled Sunfire Balm to save his morph and played a Withered Wretch.

The Mistform Warchief powered out a Gempalm Avenger to hold the ground. It traded with the Toxin Sliver and Gary tried to go to the air with Death's-Head Buzzard after cycling a Twisted Abomination. Ben put a stop to that with a Shoreline Ranger and Gary built up his forces with a Corpse Harvester.

It was Ben's turn to control the air now and he played a face-up Ascending Aven after swinging in to take Gary to twelve. Another Death's-Head mucked up that plan but Ben pressed on with both his fliers. Gary blocked each flier and when Ben cycled a Gempalm things got interesting. Gary sacrificed his Buzzard in response, using the Corpse Harvester's ability. The Buzzard's ability killed the second buzzard but when that bird's trick went on the stack Ben responded with an Echo Tracer to save his Aven. Gary found a Swamp and another Harvester.

He used the extra mana to pay for a Crowd Favorites. Gary was on the ropes and had to play a Wingbeat Warrior in the hopes of eating the freshly replayed Aven but Ben had the Pacifism for the win. 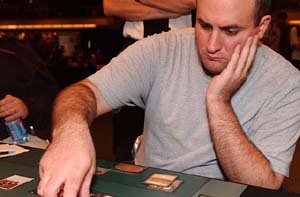 Gary got in for three more and played a Death's-Head Buzzard. Ben island cycled for land number five and played a Mistform Warchief after pulling the game even at fourteen-all.

The Embalmed Brawler changed the life totals to 13 – 9 in Gary's favor and another morph was sent to the front lines. Ben played a potentially juicy Aven Farseer and passed the turn. Gary sent in the team and unmorphed a mid-combat Daru Lancer but Ben was ready with the Echo Tracer—and got a 3/3 bird soldier in the process. Gary lost tremendous tempo and when Ben played a Seaswift he could no longer even mount a reasonable attack. He tried to set up a win for the next turn with a Celestial Gatekeeper but Ben was able to finish him off with Choking Tethers.