Round 11: Gary Wise vs. Mike Turian 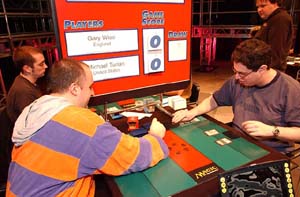 You might remember these two smiling chucklebuckets from their Pro Tour - New York 2000 Champion team, Potato Nation. Together with Scott Johns they turned the Team Limited format on its ear. Gary Wise is known for his weekly series "Wise Words" on Sideboard.com, as well as for his blustering showmanship.

Former CMU affiliate and now R&D powerhouse Randy Buehler was on hand to rib Wise about his supposed lesser impact on Potato Nation's Performance. Wise bristled visibly. Choking back the rage he shouted, "I went 11-1! I beat Maher twice! I beat Kibler! I beat Forsythe! I beat everyone!" to no-one in particular.

A turn-one Peek from Turian saw trouble a-comin'. Double Nantuko Shade together with Rancid Earth and Mind Sludge spelled disaster, if only Wise could draw a third swamp to go with his Cabal Coffers. He went through the top six cards of his deck with Tainted Pact but couldn't find a swamp. When he hit Rancid Earth number two he whistled low and decided he couldn't pass it up.

However, Wise didn't draw his third swamp, and was forced to content himself with Nantuko Shade. Turian answered with Psychatog. And then, a swamp for Wise! Triumphantly, Wise threw down Rancid Earth on Turian's only black source. Turian smiled as only he can, and played a swamp to Edict the Shade.

Not that it mattered. Wise played his second Shade and Earth. Turian couldn't answer the Mind Sludge he knew was coming, and so pitched his hand for damage. Wise Sludged, and followed up with Haunting Echoes. Said Turian, "I think I'm just gonna concede. Hard to win without win conditions." 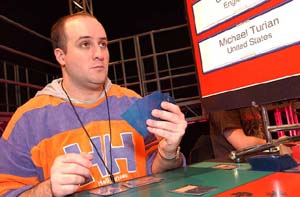 During a flurry of between-game banter, Sideboard Content Coordinator Thomas Pannell wandered by to add his two cents.

"This'll be a year [without a title] if an American does not win." - Thomas Pannell
"Yeah, and most of them are playing Spades right now." - Mike Turian

After a stutter-step that saw his Tainted Pact Syncopated, Wise managed a Rancid Earth on Turian's only blue source, a Darkwater Catacombs. The mighty Potato would not go quietly, however, and ripped an island just like that. He cheered.

That island went very well with the Syncopates he continued to draw, stopping Braids and Mirari. Unfortunately, he had no immediate answer for Nantuko Shade. Wise smashed for fourteen! Together with an earlier Skeletal Scrying, that left Turian at four. He was desperate. He went to one from another Scrying. 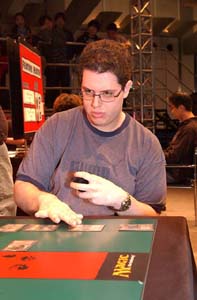 Turian's deck served up Chainer's Edict! He started Predicting Wise, knocking Braids off the top of his deck. While Wise drew more swamps, Turian made a Zombie Infestation. A second Mirari managed to stay on the table, and now things were tight.

Concentrate got Turian into the Zombie business, and another Predict milled Wise's Haunting Echoes. But eventually all slim chances must run out. Wise drew Diabolic Tutor and Forked it. With those he fetched Rancid Earths, casting one and Forking it. The one damage from its threshold ability was enough to put Turian out of his misery.

Wise then went on at length about something or other.