Round 11: Gerardo Godinez vs. Rodrigo Sanchez 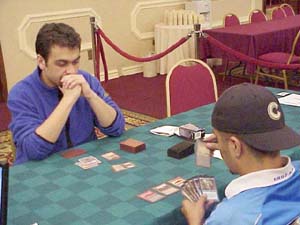 This round's Feature Match once against featured Gerardo Godinez playing versus a local player, Rodrigo Sanchez. Godinez is playing a Black/Blue/Red Control deck, while Sanchez is playing a No-Mar variant. Godinez was 9-1 and Sanchez was 9-0-1 and are at the very top table.

Godinez won the coin flip and chose to play first. The first play of the game was a Meddling Mage on Turn 2 from Sanchez naming Fire/Ice. On Sanchez's Turn 4 end step, Godinez attempted to Terminate the Mage, and Sanchez let that resolve. During Godinez's next end step, Sanchez played a Fact or Fiction, revealing Stormscape Apprentice, Dromar's Charm, Meddling Mage, Galina's Knight, and Spectral Lynx, provoking a long sigh from Godinez. Sanchez opted to take the pile with Dromar's Charm and Galina's Knight, and on his following turn he attempted to cast the Galina's Knight, which provoked an Exclude from Godinez that Sanchez Undermined. However, Godinez was perfectly happy to lose this Counter war, as it left Sanchez tapped out and open to a Lobotomy from Godinez. Sanchez revealed his hand of 2 Dromar's Charm, Undermine, Spectral Lynx, and Caves of Koilos, and Godinez took the Dromar's Charms, while on the following turn Sanchez played the Spectral Lynx and attacked for 2, bringing Godinez down to 10.

Godinez, under severe pressure from the two difficult to deal with creatures, decided that he had to cast a Fact or Fiction during his main phase, and Sanchez let it resolve, revealing 2 Urza's Rages, Recoil, Lobotomy, and an Urborg Volcano. Godinez took the Recoil and Urza's Rage, cast a Nightscape Familiar, and passed the turn. Sanchez swung and took Godinez down to 6, but had nothing to follow it up, and Godinez got to go to his precious Untap Step, after which he played a Salt Marsh and passed the turn. Unfortunately for Sanchez, he only had 6 lands other than the Salt Marsh, and only one of them produced Black mana, severely inhibiting his ability to deal with the 2 creatures in play, as he knew that Sanchez had at least 1 Undermine in his hand. On Sanchez's turn, he swung with the Knight and Lynx, and Godinez cast a Prophetic Bolt on Sanchez, attempting to find an answer. Sanchez Disrupted it, and Godinez paid, but it didn't leave him enough mana to regenerate his Familiar. Facing the 2 creatures and knowing his opponent had Undermine in his hand, Godinez conceded at 4 life. 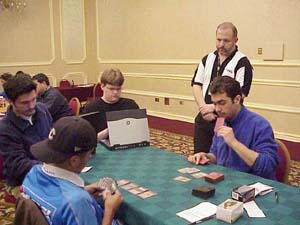 Godinez boarded in 2 Fire/Ice and 4 Gainsay, while Sanchez boarded in a few Lobotomies, Gainsays, and Crimson Acolytes. Godinez elected to play first for Game 2, and with only 25 minutes left on the clock, was probably worried about not being able to finish this match. Neither player had to take a mulligan Game 2, and the first play of the Game was a Nightscape Familiar from Godinez on Turn 3. Godinez missed his land drop that turn, but on the next turn he drew and played a Salt Marsh. Sanchez only played Lands for the first 4 turns, so since Godinez wasn't under much pressure missing the land drop probably won't hurt him that much, but he missed one again on Turn 5. During Godinez's end step, Sanchez tried to cast a Fact or Fiction, but Godinez had a Gainsay. However, Sanchez played another Fact or Fiction on his turn, revealing Caves of Koilos, Plains, Undermine, Disrupt, and Gainsay, and because Sanchez didn't have any White mana, he took the Plains and Caves of Koilos. Unfortunately for Godinez, even though he drew a 4th Land, he was not able to take advantage of the fact that his opponent was tapped out, and only passed the turn. On Sanchez's next turn, he cast a Vindicate targeting Godinez's only source of Blue mana, a Salt Marsh, and Godinez only added a Blue mana in response, not able to stop the destruction of the land. Expecting a Fact or Fiction from Godinez, Sanchez declared his attack step, and in response Godinez played an Ice on the Caves of Koilos. Godinez did not draw a source of Blue mana from the Ice or his Draw Step, so all he could do was play an Urborg Volcano and a 2nd Nightscape Familiar. Sanchez took this opportunity to cast a Galina's Knight, but that was all he had, and he passed the turn. Godinez again did not draw a Blue source, and during Godinez's end step, Sanchez Dromar's Charmed the Nightscape Familiar, and then on his turn cast a 2nd Galina's Knight. Again without an Island, Godinez was forced to sit by and watch as Sanchez cast a Spectral Lynx and a Crimson Acolyte. On Godinez's following turn, he finally drew a Blue source in the form of a Shivan Reef, but he was now under a lot of pressure from Sanchez. Taking 4 and going to 14, Godinez cast a Recoil on the Crimson Acolyte during Sanchez's End Step, which resolved. Godinez had nothing on his turn except a lonely Swamp, and again had to take 4 from the 2 Galina's Knights, blocking the Spectral Lynx with his Nightscape Familiar. He was, however, able to Exclude the Acolyte when it was recast, but his only source of Blue after the next turn was still a Shivan Reef. All this pain was really beginning to add up, and Godinez was now down to 8 life. He cast a Prophetic Bolt on the Lynx, searching for an answer, but Sanchez had a Gainsay ready. On the next turn Godinez tried for another Bolt on the Spectral Lynx, and this time it resolved, saving Godinez two life and allowing him to Impulse for an answer. Sanchez top decked a Dromar's Charm for the Nightscape Familiar, and Godinez scooped.