his matchup in the penultimate round of the World Championship Swiss was worth a great deal to the players involved. Sitting at 6-4, both Craig Wescoe and Josh Utter-Leyton were on the verge of making it into the Top 4 of the tournament. With a Brian Kibler loss, the winner of this match would secure a spot in the Top 4. The other would join Kibler in the viewing room to watch the Top 4 on the big screen.

The matchup itself was an interesting one, with Josh Utter-Leyton running a BG deck reminiscent of Jund, and Wescoe running Black-White Tokens. When Utter-Leyton commented on how nice Wescoe's list looked, Wescoe chuckled a little.

"I definitely built it so that it didn't have great matchups, but I don't have bad ones either," he said. "You can call it White Jund, if you want." 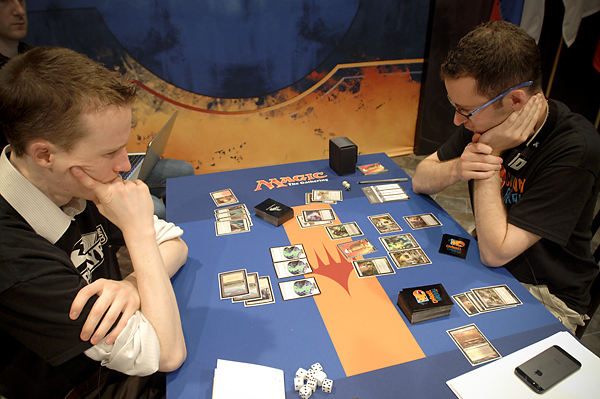 Josh Utter-Leyton and Craig Wescoe both had chances to squeek into the Top 4 of the 2013 Magic World Championship, should Hall of Famer Brian Kibler lose his Round 11 match against Ben Stark.

Game 1 was all about Garruk Relentless. After seeing it in Utter-Leyton's hand during a first-turn Inquisition of Kozilek, Wescoe opted to very briefly lock the powerful planeswalker up with a Tidehollow Sculler rather than simply strip it from his hand with Thoughtseize. While this allowed him to stay on curve, he knew that Utter-Leyton would be able to remove it immediately with the Dismember that he had revealed with his Inquisition of Kozilek.

"I figured that I would be able to cast the Sculler and take his removal spell," Wescoe explained after the match. "That would force him to play Garruk and use it to kill my Sculler. With his Garruk on one loyalty, I would be able to easily sneak through with a token to finish it off. It is also a lot easier for me to deal with 1/1 Wolves than 2/2s. Unfortunately, when I played the Sculler, I saw that he had drawn a second removal spell, making me a bit sad I didn't just Thoughtseize. I still think I made the right play." 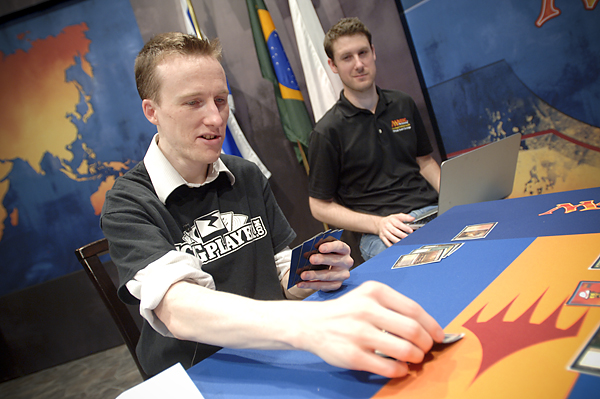 Wescoe's correct gamble, unfortunately for him, did not pay off.

Ultimately, Garruk Relentless hit Utter-Leyton's side of the table on turn three and began to churn out tokens faster than Wescoe's deck could deal with them. Wescoe tried to get through with a trio of Spirit tokens from a Spectral Procession, but an Abrupt Decay killed one of the Spirits, letting his Garruk survive to transform. Though this shrunk the size of the tokens that Utter-Leyton could produce, Wescoe still found himself outgunned. Between his own lack of lands and size and Utter-Leyton's Wolf tokens and Treetop Village, Wescoe continued the gradual descent towards death. Without an answer to either, he picked up his cards.

Game 2 was only a game in name. Utter-Leyton kept the following hand: Forest, Tectonic Edge, Abrupt Decay, Inquisition of Kozilek, Maelstrom Pulse, Tarmogoyf, Dark Confidant. He had the ability to cast the Tarmogoyf in his hand, as well as everything else if he drew a source of black mana, the most numerous type of card in his deck. It was a gamble, but it didn't pay off. Wescoe curved out perfectly, ending the game with an army of creatures in play, while Utter-Leyton failed to find a third land of any type, let alone a source of black.

"I am probably forced to throw that hand back on the play," Utter-Leyton said, "But I don't think I can ever mulligan that hand on the draw. All I need is a source of black mana by turn three and my hand is incredible." 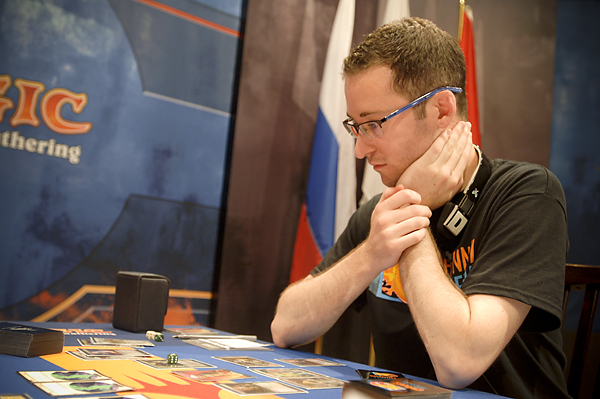 The final game came down to one of the ancillary stars from the first game: Treetop Village. In the first game, the Village had provided supporting attacks, dealing six damage over the course of the game. In the final game, it went one step further. Utter-Leyton didn't have much in terms of early aggression, instead building his board with Deathrite Shamans and using his excess mana to send Treetop Village in to take chunks out of Wescoe's life total. The Deathrite Shamans served a secondary purpose of forcing Wescoe to delay using Lingering Souls to bolster his team. Unwilling to allow Utter-Leyton to eat half of his card, Wescoe waited until he had used a pair of Path to Exiles to deal with them before casting and flashing back the powerful sorcery.

Unfortunately, every time that Wescoe built up an army, Utter-Leyton brought them crashing back down. First, his Spectral Procession was hit by a Maelstrom Pulse. Then, after finally finding the window to cast and flash back Lingering Souls, Wescoe lost his team to an Infest. He had hidden it under a Tidehollow Sculler, but Utter-Leyton found a Dismember on the perfect turn to kill the Sculler and free up the Infest to wipe the board. From that point, Thrun, the Last Troll, and the pair of Treetop Villages finished the work they had begun at the start of the final game.