Round 11: Ichiro Shimura vs. Shuhei Nakamura ($1000): Japanese Duel to the Death

As pairings were announced, the very lucky Steve Wolfman was informed that he would now be paid $1000 for doing nothing but watching the next round, a fortunate beneficiary of the new rule for skins-style payouts that says players at the top of the standings will now be awarded byes in rounds with an odd number of players. 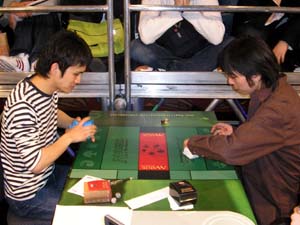 The two countrymen knew a Top 8 was possibly on the line.

Before the round, the two Japanese players discussed a possible split, but Shuhei Nakamura -- who is playing a Tsuyoshi Fujita creation -- needed to go consult with the deck's designer before figuring out whether he was allowed to do so. The final verdict was that the two players would run a 1/3 split for the rest of the tournament.

The matchup here is an interesting one, since it features Ichirou Shimura's fast and versatile weenie beats versus Nakamura's three-color Legend special. Shimura started strong with Lantern Kami and Eight-and-a-Half Tails, while Nakamura ramped his mana with a Tribe Elder and played the now-famous frat paddle, Honor-Worn Shaku. Waxmane Baku, another special Japanese piece of tech, marked Shimura's next play, but that left him tapped out and unable to do anything when Nakamura strapped a Jitte onto another Elder and sent him slithering into the red zone. The result was a dead spirit, a dead snake, and one counter left on the equipment.

Keiga soon entered play for Nakamura, radically changing the dynamic of the board with her 5/5 dragon-y presence. A Lantern Kami held off the Tide star for a turn , but Jitte cleared the air the next turn, making sure the flying path to victory was clear. The chain of Tallowisp and Waxy Bob found Cage of Hand for Shimura, but not before Konda's Banner dropped into play followed by Jugan, making the air a very clouded and angry place to be. Kami of Ancient Law ripped directly from the top of Shimura's deck let him search out another Cage and gave the Baku a counter to tap down Keiga on the next attack, giving Shimura the extra turn he needed to find exactly enough damage to kill Nakamura and put himself one step closer to a Top 8 appearance.

Shimura was faced with a hand containing a single Plains, a Hound of Konda, and a host of two drops on the draw for Game 2. He paused for a moment to think about it and then chose to keep, bringing the beats right from the start.

No Plains appeared for either of his first two draws, at one point giving Nakamura a five-to-one land advantage. Turn-four Godo snatched a Jitte from Nakamura's deck, and what once looked like a decent start for both players (in spite of Shimura's brief bout of mana screw) began to smell like a rout, especially when Godo picked up the Jitte and started bringing the noise.

White Weenie is surprisingly resilient though, as Blessed Breath on Tallowisp for protection from Red made the attack null, and Shimura's Jitte the next turn made sure no samurai funny business occurred. Until of course, Nakamura played his second Jitte and Wrathed Shimura's board with the counters.

Looking at Toshiro's complete absence from decklists in this tournament, it becomes once again apparent that clothes do make the man. In this case, resilient did not end up meaning miraculous recovery, and the gateway to the Top 8 was suddenly only a game away for either player.

Shimura's draw for Game 3 was sheer hotness, including two Plains, two Jitte, Lantern Kami, Cage of Hands, and Konda's Puppy. Jitte number one went down to a doppelganger, but numero dos stuck around long enough for a Lantern Kami to buzz over with it. 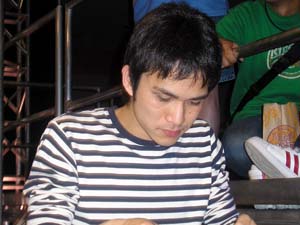 Meloku who bars the way (for Lantern Kamis at least) joined Nakamura's squad, but since he was tapped out that play didn't leave him any good options, and Meloku died on Shimura's next attack. The presence of the legend did force Shimura to remove all the counters from the weapon. A second Meloku a turn later plus an extra land made sure the foppish legend stayed in play this time, sending an illusion to do the dirty work of blocking the Kami again.

Konda's Banner made the Illusions a bit more intimidating, and for a moment Shimura's army of puppy, Kami, and Kami looked stymied. Of course, Shimura just did what any good aggro player would do (attack), and Nakamura was suddenly at 12 with no action at all on his next turn.

Cage of Hands took Meloku out of the red zone section of the game, and Shimura attacked his Jitte-equipped Kami and Isamaru into the seven untapped lands of Shuhei. The game then stopped for about five minutes as Nakamura received a caution for slow play before making a single Illusion to block the Kami, and then using Glacial Ray, splicing Ray after blockers were declared to kill his Illusion and Isamaru, thus keeping the Jitte from picking up any extra counters.

Yawns continued to mount after Nakamura's next untap step as he again took an extremely long time to make up his mind over whether to play spells or make flying Illusions. In the end he cast a frat paddle and played Kodama of the North Tree, looking to turn the game around and go on the offensive next turn. Shimura swung again on his turn, merely keeping the Illusion count down, and then cast Faithful Squire -- but that went immediately to the graveyard without passing go, courtesy of the Ray left in Nakamura's hand. Shimura did something rather fascinating in response to the Reach splicing Ray though, using two counters on his Jitte to kill the Squire so that the Reach (which now had a target) was countered because the target of the spell was no longer legal.

One attack from the Kodama got through dropping Shimura to 10, but the second was absorbed by Kami of Ancient Law, and a Willed Lantern Kami, keeping Shimura in the game. Terashi's Grasp got rid of the troublesome Konda's Banner, foiling any Illusions of a lethal counterattack. About this time, Mike Flores leaned over to an observing Randy Buehler and whispered, "That was a huge Terashi's Grasp," providing all the clarification needed for those of you reading at home. 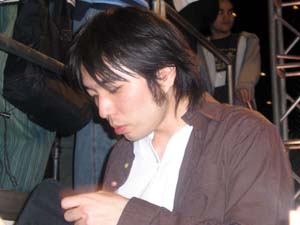 Godo finally got rid of Shimura's Jitte, but not before the Jitte gave Shimura four more life and killed the last of Nakamura's Illusion tokens. Tallowisp finally added a counter to Waxmane Baku, which was fortunate, since Nakamura cast another Jitte and tossed it on the samurai. Nakamura dispatched the Waxmane with Glacial Ray, making sure it would trouble him no more.

Jitte from Shimura this time killed Nakamura's Jitte, and the board bogged down with Godo and a Caged Meloku for Nakamura against Tallowisp, Lantern Kami, Samurai, and a new Isamaru for Shimura. The next combat saw Godo and the Samurai trade, but that just opened the door for Nakamura to cast another Godo, calling up another Jitte.

Shimura drew his next card, but found nothing to stop Godo from smashing his skull in, so he extended his hand, congratulating Shuhei on an incredible comeback in the game and the match.

At one point it looked like Nakamura was completely out of it, but he dug in his heels, made excellent trades, and finally pulled ahead on the back of the Bandit Warlord and Toshiro's silly poking stick.