Round 11: Itaru Ishida vs. Jun Nobushita 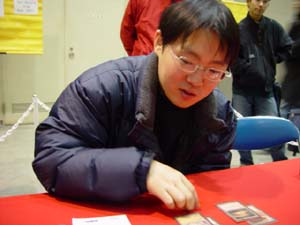 7-3 is not the place you want to start running into buddies. Nothing short of winning out is acceptable, and that means crushing some dreams. Such is the fate of Panzer Hunters Brain Trust Itaru Ishida and Clown Prince Jun Nobushita. The matchup does not favor the smaller Ishida, whose Goblins are exactly the sort of thing Nobushita's black-green Contamination Control is fit to destroy.

Ishida led with Mogg Fanatic, and Nobushita trumped his whole strategy with Entomb for Nether Spirit. Ishida fought on gamely, dropping Sparksmith, and then another Fanatic and Flunkies. Duress had taken his Tangle Wire, so things would not be easy. Nobushita reinforced that idea as he tapped out for Pernicious Deed.

Ishida traded four life for five damage, shooting down the defending Spirit. Nobushita fell to thirteen, but got to wipe Ishida's entire board. Ishida rebuilt with Sparksmith and Goblin Piledriver, but he was completely out of gas. Nobushita got in with Call of the Herd. Faceless Butcher followed, and two land draws later they were on to Game 2.

Ishida mulliganed for the second game, and had no play on his first turn. He made a Sparksmith on his second turn. Nobushita meanwhile Vampiric Tutored to set himself up, then spared himself some damage with Diabolic Edict. Ishida had just a Raging Goblin and Mogg Flunkies. 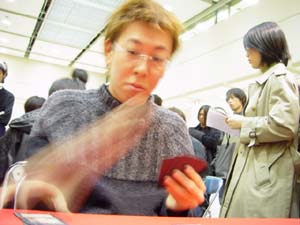 Nobushita went for the throat. On his third turn he Entombed Phantom Nishoba and then Reanimated it. Ishida just laughed. He untapped and dropped Threaten on the table. Nobshita blinked and looked at his life total. Double-checking the amount of incoming damage, he picked up his cards.

This time Nobushita would get to play first, cementing his advantage. Ishida started with Fanatic and Piledriver, but Nobushita calmed him down with Diabolic Edict and then dropped Oath of Druids. Ishida resisted the urge to pack it in right there.

He gamely dropped another Fanatic and Mogg Flunkies. Nobushita's Oath was kind, turning up only Nether Spirit. He compounded the trouble with Pernicious Deed, just in case things got out of hand. Ishida swung to bring Nobushita to fourteen. This time Nobushita's Oath gave him Visara the Dreadful. Ishida drew and stared at a hand of worthless goblins, then conceded.