Round 11: Jay Elarar vs. Jeff Gerstl

Elarar had a disappointing start this weekend, as he went 0-3 in his first pod. Since then, he has been on a winning streak, as he went 3-0 in the following pod, and started off today 4-0. In a twist of irony, Jeff Gerstl is using the same tech that Elarar piloted to a finals finish in the Masters Series: Kavu Chameleon. Elarar was able to overcome an Invasion Block Constructed heavy field in Barcelona by maindecking the uncounterable monsters, and Gerstl is apparently using a similar strategy for his Fires deck. This may prove to be the difference, as Jay cannot counter or Wash Out the Chameleons.

Elarar won the coin flip, and went first. Gerstl opened with a first turn Llanowar Elves, while Elarar summoned Spiketail Hatchling. The Elf attacked for a point of damage, and Gerstl ended his turn. Elarar then played a Rishadan Port, and attacked with the Hatchling. A Waterfront Bouncer was summoned, and Gerstl played a Blastoderm on his turn. In response, Spiketail Hatchling was sacrificed to counter the 5/5 monster. Fires of Yavimaya showed up on the next turn, and Jay played Chimeric Idol. Kavu Chameleon was then played by Gerstl, and it attacked to deal four damage.

A second Idol was now played by Elarar, but he had to handle the Chameleon at some point. Another Fires was cast by Gerstl, and the Chameleon attacked for another four points of damage. Waterfront Bouncer was activated to return the Chameleon to Gerstl's hand during the attack step, and Jeff then cast Ghitu Fire for six on Elarar, bringing him to four life points. Elarar tapped out on his next turn to play Wash Out, which returned both Fires and the Elf to Gerstl's hand. This cleared the way for his Idols, which attacked for six damage.

It was now time for Gerstl to rebuild, and he played Fires, followed by Elf and a Chameleon. The 4/4 Kavu attacked, and was chump blocked by Waterfront Bouncer. The following turn saw the second Fires replayed, along with a second Chameleon. Both 4/4s attacked, but were bounced back thanks to Rushing River with kicker. Still, Jay had no way to handle the impending uncounterable monsters, and he conceded.

Elarar went first, and played a second turn Rishadan Port, which was used on Gerstl's upkeep. Rishadan Airship came out on turn three, and Gerstl answered back with a Thornscape Battlemage without kicker, which was countered with an alternate casting cost Daze. The Airship flew over for three damage, and Elarar cast Chimeric Idol. A second Idol joined up, and Elarar attacked with an Idol and an Airship. However, there was a dispute, as Jay may have forgotten to tap all his lands before attacking. Mike Donais gave Elarar a warning, and his Idol was allowed to attack. However, it died to Urza's Rage before it could deal damage. 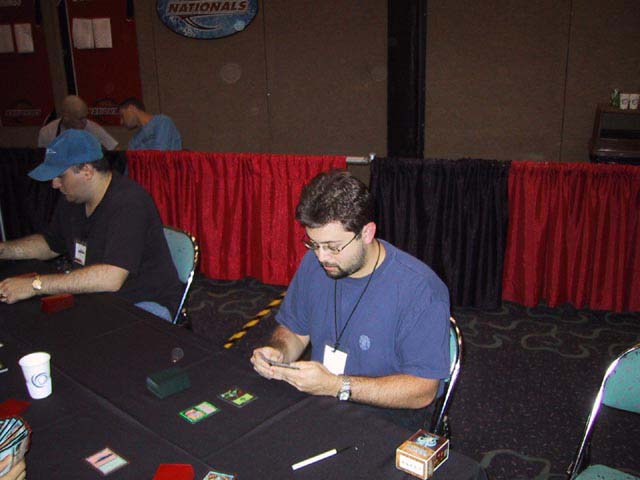 To make matters worse, a Thornscape Battlemage was played with both kickers, taking out the Airship and the Idol. Gerstl continued to build up his army with Blastoderm, and Elarar tried to slow things down a bit with Wash Out on green. The Blastoderm came back down and attacked for five on the following turn, and Gerstl dropped a Fires of Yavimaya, which was Foiled. He then played a second Blastoderm, which resolved. Elarar took his turn and once again played Wash Out on green, bouncing back both of the 'Derms.