Round 11: Jeff Cunningham vs. Mike Turian 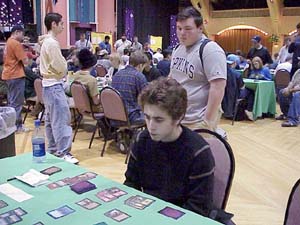 Jeff CunninghamThis match was light-hearted, as Mike Turian is always a pleasure to play against, and Jeff Cunningham is quickly becoming one of my favorite players to watch.

Turian won the roll on a die borrowed from someone on another table...don't you guys ever bring your own ? Both players showed mono-color through three land drops; Turian with Islands, Cunningham with Mountains. Turian's Peek revealed a Shower of Coals and a Firebolt, along with several green cards Cunningham couldn't play. Cunningham finally ripped a Forest on turn four and began putting the men on the table.

Turian kept pace, playing the highly sought-after limited beating, Cephalid Aristocrat on both turns 5 AND 6! Cunningham's Rootwalla had done some early damage, and he then played Temporary Insanity on one Aristocrat and went into the red zone. Mike fell to 8 but attempted to stabilize with a Chamber of Manipulation and Soul Scourge. Even though Cunningham had his Shower of Coals countered (giving Mike at least a moral victory this game) Jeff was able to Reckless Charge and Firebolt his way to the win. 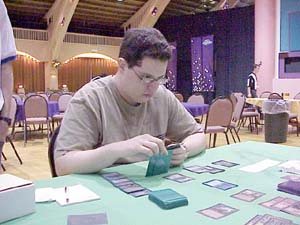 Game 2 saw Mike playing first, not wanting to give up any time against Cunningham's savagely fast deck, but Turian was forced to mulligan. While his hand was not stellar, it had some bodies, and in fact Turian came out very strong. Mesmeric Fiend, Thought Eater, and a Cephalid Scout all came out to play in the first 5 turns, and Cunningham was swinging back with a Rootwalla of his own. That's when it hit...the Violent Eruption! Cunningham took advantage of Turian having lots of mana tapped and killed all three of the Turian's guys.

After the Eruption, Mike didn't have a chance; he had already mulliganed and gave up 3-for-1 to Cunningham, stopping the only offense he had.