Round 11: Jeff Garza vs. Paul Russell 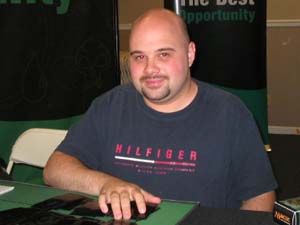 Garza is the reigning JSS Champion from Massachusetts and is fresh off a top 8 finish at Grand Prix: Orlando. His strong showing here in New Jersey has continued a hot Constructed streak that started with his JSS victory in Kansas City back in June. Paul Russell is from Toronto and has had recent success with his team finishing top four in Pro Tour: Seattle, and also finished top 16 in Orlando. Paul is playing a Big Red deck versus Jeff's Tooth and Nail deck. Jeff has a very strong deck advantage in this match, since Big Red is built with heavy artifact removal to deal with Affinity, which means Paul will have plenty of dead cards game 1 versus Tooth. A key card in this matchup is Paul's Molten Rains, with can destroy Tooth's Cloudposts, thus preventing them from casting the expensive spells in their deck.

This game started with no creatures, as both players developed their mana. Two Molten Rains from Paul stunted Jeff's Cloudpost development, but Eternal Witness and Sylvan Scrying allow the teenager to deal with the removal and still stay one step ahead. Paul cast an Arc-Slogger and Solemn Simulacrum to apply pressure, while Jeff recovered his mana advantage. Jeff cast a Tooth and Nail (thanks to untapping all of his lands with Rude Awakening), fetching Duplicant and Abunas from his deck. He then played a Platinum Angel and Leonin Abunas from his hand, putting him in a seemingly safe situation. Unfortunately for Jeff, Paul had Furnace Dragon to remove the Angel from play without targeting it, and attacked for lethal damage.

Jeff started out well with two Sylvan Scryings for Cloudposts, but Paul again had a Molten Rain for one of them. An entwined Reap and Sow from Jeff brought a third Cloudpost into play, giving him nine mana, enough to do almost anything he should want -- like, say, power out a Tooth and Nail for Eternal Witness and Duplicant. The Duplicant removed Paul's only threat (an Arc-Slogger), and the Witness returns a Reap and Sow. A second Tooth and Nail from Jeff locked the game up. 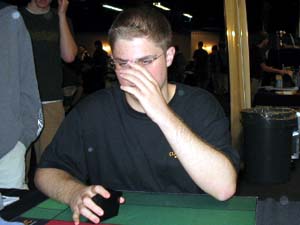 Both players are visibly frustrated at their opening hands, seeming almost resigned to give up before play had begun. Jeff started out with three Cloudposts, and this time Paul had no Molten Rain. An early Tooth and Nail brought out Colossus and Duplicant and things looked bleak for Paul. Reap and Sow on a Great Furnace and Oxidize on a Talisman ensured that Paul won't be able to cast Furnace Dragon to remove the Colossus from play. Paul had a different play and used Grab the Reigns to gain control of the Colossus and sacrifice it to his Megatog, getting around the indestructible feature of the Colossus. With no Colossus, the board is now even, with Megatog facing down a Witness and Duplicant. A second Witness came into play, allowing Jeff to cast Tooth and Nail again, and Paul couldn't find any answers.

Garza felt that this matchup was good for him, but admitted that Molten Rain and Furnace Dragon do present some problems. Paul has done well previously in this matchup, but couldn't pull it out here.