Round 11: Jim Herold vs. Patrick Mello 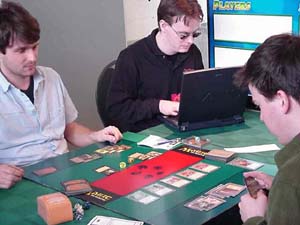 This round pits two strong Germans against each other. Patrick Mello is a member of Team Godzilla and has both Pro Tour and Grand Prix top 8's to his credit. Jim Herold has won three Grand Prix, one as part of team Three Heroes and two individual titles.

Mello went first and was forced to mulligan with his blue-white deck while Herold came racing out with a pair of squirrel tokens from his green-black deck.

A Mystic Zealot from Mello soon put a stop to the nibbling squirrels. He summoned a Hallowed Healer in an attempt to consolidate his board position.

Then a Gorilla Titan came into play as an 8/8.

Then a second Gorilla Titan came into play as an 8/8.

Herold started aggressively in game 2, busting through Mello's Angelic Wall with Filthy Cur and Crippling Fatigue. By choosing to kill the wall Herold allowed Mello to drop a Strength of Isolation on his Dogged Hunter before Herold could flashback the Fatigue. This created a problem creature for Herold that nullified the Elephant Ambush in his hand.

Two Faceless Butchers took care of a Blessed Orator and Aven Flock but Herold still couldn't get past the protected Butcher and Mello was able to start attacking through the air with an Aven Flock.

A Sphere of Duty reduced the effectiveness of the green half of Herold's deck as an Avenger only attacked for one.

A Zombie Assassin from Herold put the Flock back on defensive duties.

Herold cast Chatter of the Squirrel mainly to put a second card in the graveyard. This meant he could cast his third Faceless Butcher and have the Zombie Assassin as back up should Mello attempt something like Sheltering his Aven Flock.

This left Mello with just the enchanted Dogged Hunter and even though it was a nuisance, it couldn't hold back everything.

The "Bug Blog" is a running list of updates, alongside a list of Magic Online known issues.