Round 11: John Larkin vs. Anton Jonsson 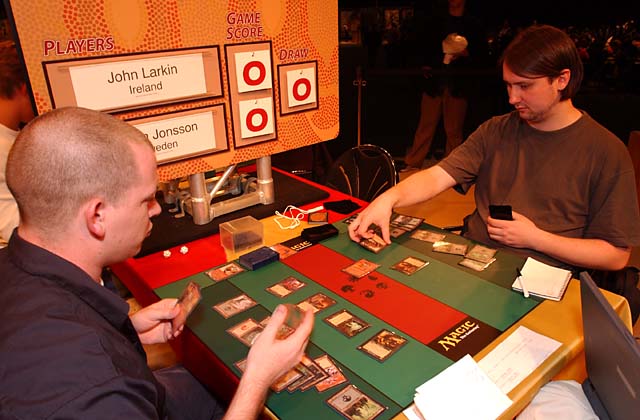 These two players sat down with the Team competition weighing heavily on their minds. Ireland has a slim one-point lead over Sweden, and this face-off between their national champions—John "Pub Brawler" Larkin and Anton Jonsson—is important to more than just them individually.

"We must not let the Swedes overtake us!" shouted Larkin as he shuffled.

Jonsson's first play was a turn-3 Cabal Torturer, which Larkin offed with a Lava Dart so that he could play his own. Larkin's Torturer held Jonsson's hand hostage for several turns, as the Swede was holding a few one toughness creatures. Jonsson played out a Scrivener with no target and a Famished Ghoul, but Larkin got a two-for-one trade with a Barbarian Lunatic.

Jonsson kept playing black creatures and letting them die, and then dropped Balthor the Defiled. He could now play his other Torturer—2/2 thanks to Balthor's Minion-pumping—and try to set up a situation where he could take down Larkin's Torturer with a key activation of Balthor. But that plan never came to fruition, as Larkin simply Flame Bursted Balthor.

Larkin deployed a swampwalking Whispering Shade and souped it up with Arcane Teachings. Jonsson had no way of dealing with it, and with the Torturer across the table mocking him, he scooped. 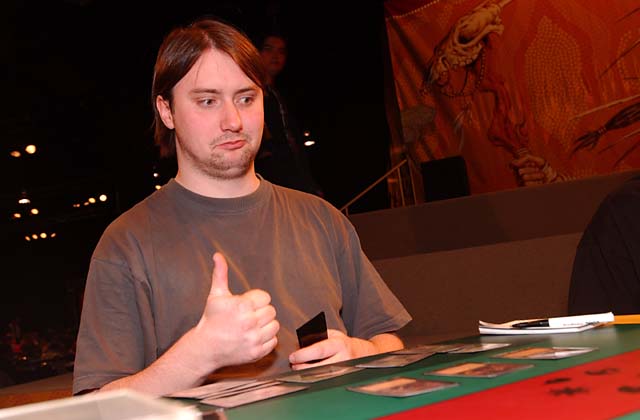 Jonsson had to mulligan to start game 2.

Jonsson: "I'll tell you that the average casting cost of my cards was zero."
Larkin: "Seven lands, eh?"
Jonsson: "Yes, and now I'll probably draw none."
Larkin: "I'd be lying if I said that wasn't true—three more points for Team Ireland!"

With their decks so full of removal, neither player did anything until Jonsson played a Shadowmage Infiltrator on turn three, which was immediately dispatched with Innocent Blood. Morgue theft got it back, and it was killed with a Chainer's Edict. The Theft was flashed back, and by the time Jonsson was ready to cast it again, he had out an Earsplitting Rats to suck up the potential flashed back Edict.

Larkin put out his Torturer and then an Organ Grinder with Arcane Teachings, but Jonsson had a trio of Lost in Thoughts, and put one on the Torturer and two on the Grinder to in essence remove them from the game. Larkin found a Whispering Shade—capable of blocking the Infiltrator—but Jonsson had a Faceless Butcher for it. A Shade's Form on Finkel sealed the deal for Jonsson, and Larkin fell in three attacks. 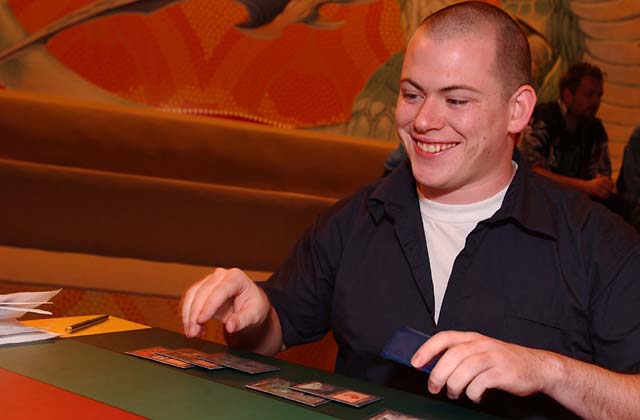 The third game started off much differently, with Larkin playing out Barbarian Outcast and Organ Grinder. Jonsson played his own Grinder, the used a Churning Eddy to steal tempo from Larkin. Larkin stole it right back on his turn with a Flame Burst and then played out another Barbarian. Jonsson's Mesmeric Fiend stole Larkin's Soul Scourge, but an Arcane Teachings on the Organ Grinder stole it right back.

Jonsson used a Lost in Thoughts to stop the Grinder, but he had nothing to stop all of Larkin's other creatures. Even a late Faceless Butcher wasn't good enough, and Larkin took the match.