Round 11: John Larkin vs. Dirk Baberowski 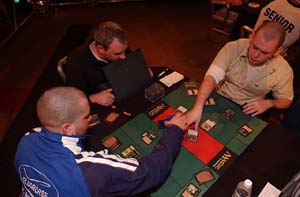 These two could be twins. Both are stocky of build, short of hair, and stern of visage, lick a couple of thugs that would rough you up under the bleachers of a soccer match.

The only thing different about these two Europeans is their records: Dirk is 6-3-1, and is effectively out of the Top 8, whereas Larkin is 7-2-1 and can win out. Pro Tour point considerations for the Masters keep Baberowski from conceding outright to Larkin, so the two must slug it out.

Larkin attacked, and then made the mistake of letting Dirk untap before attempting to Swat the Wirewood Savage. Dirk had Tribal Unity, casting it for 2 and turning his little Elves in a 15-point strike force. Larkin fell to 1, and then lost on the next turn to Dirk's Dirge of Dread. 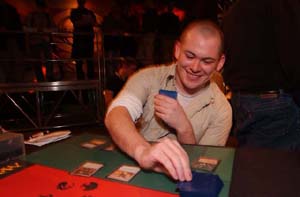 Larkin: "I really wanted [to face Raphael] Levy. I definitely would have beaten his deck."

Larkin had a turn-2 bear—Glory Seeker—but Dirk one-upped him with Elvish Warrior. If the Warrior comes out on turn two, he can be quite good, and Dirk's deck apparently has the mana base to make it happen.

Regardless, the Warrior was Swatted, and the Glory Seeker came in.

Then the game got dumb. Baberowski played out two Wellwishers, and Larkin started playing out a string of Daru Cavaliers, three in all. Baberowski added another Wellwisher, then another Elf, and eventually a fourth Wellwisher. Larkin kept adding men to the table, but his attacks for nine a turn meant nothing to Baberowski, who could gain 20 per. 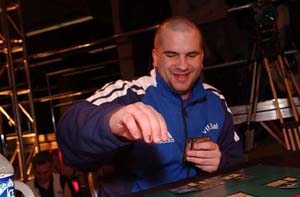 "This is ridiculous," said Larkin, "and there wasn't even a single Crown of Suspicion in the draft."

The fact that Larkin "fetched" with his Daru Cavaliers meant that he would get decked first, so he had to try and win the game.

When Baberowski's life total approached 200, and Larkin's attacks that would kill a normal mage were shrugged off, Larkin conceded. It eliminated Larkin from Top 8 contention, but it was one of the most entertaining matches of the weekend.