Round 11: Jon Finkel vs. Gabriel Tsang 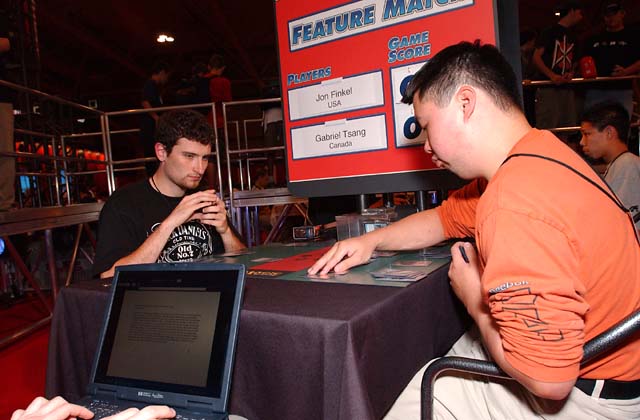 Reigning World Champion versus hometown hero, it's as lofty a match as any could imagine. Title after title could be lauded upon both players; Jon was the United States National Champion last year, and Gabriel was on the Canadian National Team the only time to date that the team event was not won by the United States National Team. Both have been prominent professional players for longer than most can remember, and these two are definitely at the very top of the game today, as there run for the Top 8 can show. Jon is sporting a four-color non-green assortment of the best cards he could get his hands on, with such bombs as Pyre Zombie and Desolation Angel that can easily win the game by themselves. Gab's deck is the opposite; nothing overly powerful, just twenty-three good cards within three colors, a very solid black-blue deck with a light touch of red mana by all appearances for his Flametongue Kavu and a few other gems.

Gab won the die roll and chose to play first, and kept his first hand. Jon's deck has some fairly shaky mana, and it showed when Jon took his first mulligan. Gab played a pair of islands, while Jon started with a plains and Crosis' Catacombs. Gab played a swamp and Tower Drake, then attacked while Jon wasted time replaying his lands. Gab played a mountain after his attack and passed the turn, while Jon topdecked the Land to play a Tower Drake, which was Repulsed at the end of the turn. Gab attacked again with the Drake and played a Sea Snidd, which Jon had no choice but to Terminate on his next turn. Gab attacked with the Drake again and played a three-point Allied Strategies, and Jon had finally drawn his fourth land, an island, with which he played Coastal Drake.

Gab's new grip allowed him to play a seventh land, another swamp, and demolish the Coastal Drake with a Flametongue Kavu, with a bit of a chuckle thanks to the ironic twist applied to that specific two-card combo. Gab then follow it up with a less-impressive Morgue Toad. Jon drew and played another island, then Hobbled the Flametongue, but Gab got in another crack at Jon, dropping him to eight, then played a Phyrexian Reaper and Mournful Zombie. Land 6 from Jon was another island, and he played a Coalition Honor Guard to stop some of the bleeding. Gab attacked Jon down to one life, losing the Toad, and followed it with a Trench Wurm. Indomitable to the last Jon played a swamp, and his Tower Drake from before, then his Pyre Zombie. At the next attack, though, it was in fact over. 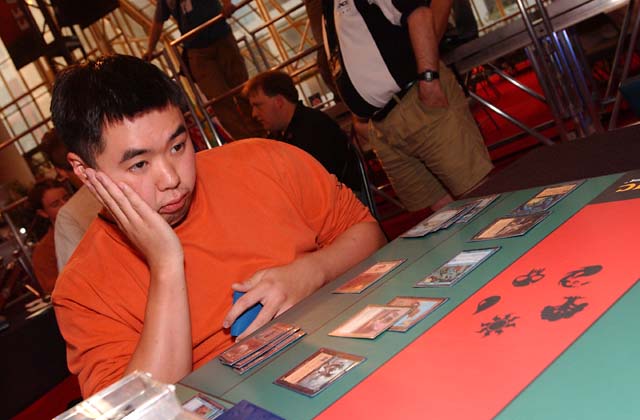 It was Jon's choice to play or draw this time, and once again Gab got to play first. Gab starts it out with a mulligan while playing first, which is usually quite an unfortunate position, and Jon is mulligan-free. Gab played two swamps to Jon's mountain and swamp, and on his third turn Gab has a mountain and Quagmire Druid. Jon played a plains on his third turn but nothing else, while Gab attacked him and played Phyrexian Rager, followed by a Sulfur Vent. Turn four for Jon saw him play Terminal Moraine, but nothing else, and he took the next four damage in stride. Gab played a Morgue Toad, and Jon used the Moraine to get a second plains. Jon played an island and white-kicked a Stormscape Battlemage, going to 17 and putting a man in the way. Gab swung and the Battlemage offered to trade with the Toad, and Jon dropped to thirteen. Gab played a swamp and nothing else, finally acting like he was out of cards. Jon's second mountain came down and so did the Tower Drake, but Gab played Cursed Flesh on it. For a white mana Jon kept it around for the turn, and it blocked Phyrexian Rager on its way to the graveyard, and Jon went to eleven. Jon played Pyre Zombie with two red available, effectively neutering the next attack, but it came anyway. Gab threw the men at Jon and the Zombie killed them both, as Jon went down to nine. Death on the Rager dropped Gab to fifteen but got him a fresh card, and Sulfur Vent was sacrificed to play Tower Drake.

A kicked Desolation Angel from Jon made the board much less certain, as the Angel came knocking on Gab's dome. Both players played a swamp, but Gab got a second and Mourning after the first swing. Jon played another island and had no play, while Gab played a fresh island off the top and cast Coastal Drake. Jon played a mountain and an unkicked Duskwalker, so on Gab's next attack the Walker chump-blocked Phyrexian Rager while the Coastal Drake got eaten alive by the Desolation Angel, as Jon went to three life. With another island, Jon cast a Grave Defiler, but found no Zombies. Gab got the Mourning back and put it on the Defiler, letting the Rager get by unchecked, and Jon went to one life in the attack. Coastal Drake was played by Jon to follow up, after he played a fifth fresh land, and Gab had to consider the merits of his past plays in this application.... Tower Drake for Coastal Drake? If Jon runs out of creatures first, then this works all day long for Gab, but otherwise he is in trouble. Bog Down from Gab hits a Hobble, and Jon returned Pyre Zombie to his hand, then played a swamp and the Zombie. Jon attacked with the Angel, ensuring that this was the last turn in which Gab could block without losing. Mourning made the Tower Drake survive, then was moved to the Desolation Angel to prevent the lethal counterattack. 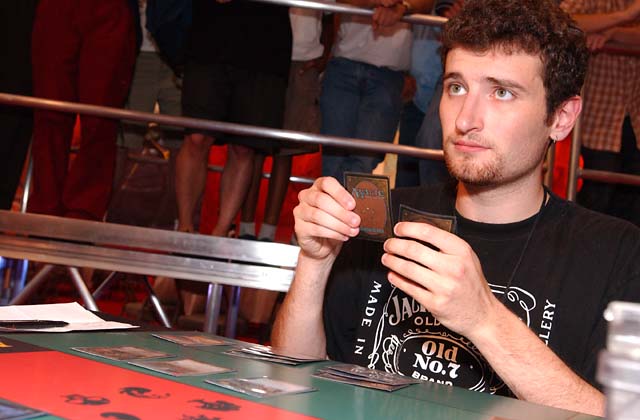 Jon again bought back the Pyre Zombie and casts it, while Gab drew his card and thought about the game for a bit. Phyrexian Reaper was put into play from Gab's side, and Gab ended his turn, with Jon still holding on at one life. Jon untapped and attacked with the Angel, broadcasting something giving him confidence, be it a Mountain to fuel the Pyre Zombie for the kill, or something as mundane as a flier to block the Tower Drake on his next turn. Gab then thought about the different plays that could justify the attack. Gab took the bait and blocked, and it was a Living Airship that allowed Jon to attack, an Airship that would doubtlessly kill Gab from this position. Gab attacked with the Phyrexian Reaper, and Jon blocked with his Pyre Zombie, but after damage was on the stack Gab played Death Bomb, targeting the Living Airship, and the match was over thanks to the lose-two-life effect of that particular spell. As tight as the match was, we all sure wish that it was a black creature that Jon had to play that turn, so this particular fight between a pair of juggernauts of the game could at least go to three games.