Round 11: Jon Finkel vs. John Larkin 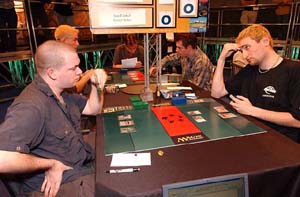 Jon Finkel has been in a bit of a slump lately and hasn't won money on the Pro Tour in about a year. Kai Budde has passed him and taken over first place in career earnings, but Budde is watching from the sidelines of PT Houston while Finkel makes a run at his 10th Top 8. (Budde "only" has 7 Top 8's and no one else has more than 5.) A Top 8 here would actually put Finkel back in first place in lifetime winnings.

I asked Finkel about exactly that possibility and he said it wasn't going to happen: "The problem is that both my deck and I are steaming piles of s**t." His opponent, many-time Irish national champion John Larkin smiled and said "no comment." Finkel fired back with "Luckily my opponent is too ..." Larkin just laughed. The atmosphere was quite friendly until the round actually started and then suddenly both players grew quiet and businesslike.

Finkel destroyed most of Larkin's hand with three Duresses at the beginning of game 1, but he couldn't take away the Gilded Drake that Larkin had drawn. Finkel didn't have a reanimation spell anyway so he just kept attacking with a pair of Hapless Researchers while each player tried to put something more exciting together. Hapless Researcher beatdown isn't exactly a fast clock so Larkin had time to draw both an Entomb and an Exhume which he used to get Visara the Dreadful into play. Visara was the perfect choice, of course, because Finkel also got to put an enormous monster into play off the Exhume. Finkel chose Petradon. That's exactly what Larkin was hoping Finkel would do because Larkin had the extra land he needed to play a Gilded Drake and steal the 5/6 Petradon rather than just kill it with Visara. Finkel had no answers. He Vampiric Tutored and looked studied his entire deck, but still couldn't find anything that would help. 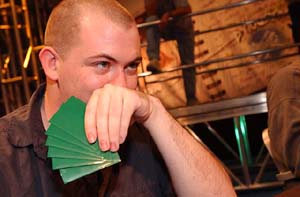 Larkin kept an opening hand for game 2 with Duress, Duress, Reanimate, Cabal Therapy, Island, Volrath's Stronghold, and a Brainstorm that he planned to use to go digging for black mana. Finkel took the Brainstorm with a first-turn Duress and it turned out Larkin's first source of black mana was three cards down. The bad news for Finkel is that he didn't really do anything with all the time he got by color-screwing his opponent. There was then an amusing moment when Finkel Fiended himself ... that is, he used his Mesmeric Fiend to steal a Shadowmage Infiltrator from Larkin's hand.

Finkel managed to Entomb and then Reanimate a Rorix, but Larkin promptly Vampiric Tutored for Gilded Drake and stole it. Finkel then played the Life side of Life/Death off a City of Brass and attacking with all his lands was just enough damage to win! 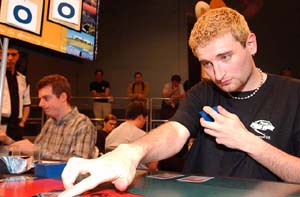 Finkel had turn 1 Duress again in game 3, but Larkin was able to hide everything that could be Duressed on top of his library. He showed Finkel a hand of Fiend, Finkel, Finkel, Visara, and land. That Fiend then stole Finkel's only reanimation spell (leaving him three ways to put stuff into the graveyard) and Finkel's draw was suddenly awful. Finkel dug into his library with a pair of Careful Studies that found nothing but a third Study. That third Study found the goods though – Exhume and Vampiric(Tutor 9and Finkel still had the Entomb form his opening draw). By this time, though, Larkin was beating him down with a pair of Shadowmage Infiltrators. Larkin laughed, saying, "How ironic." Finkel answered "Everyone always says that when they beat me down with that card." Finkel Duressed Larkin to see what was going on and saw quite a lot of hate to slog though in the form of both Coffin Purge and Gilded Drake. Finkel had to wait on his combo until he found some way to deal with those, but he never did. Larkin, of course, was drawing three cards per turn and managed to put Multani into play on his side and Finkel extended his hand.

This win ran Larkin's record on the day to 4-0 and his overall mark is 8-1-2. Finkel falls to 7-3-1 and would have to win out and get a bunch of help to make Top 8 – he's probably eliminated from contention.