Round 11: Jon Finkel vs. Yoshiaki Tashiro 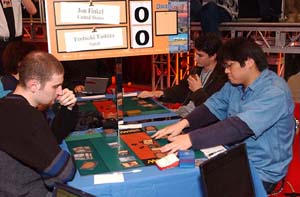 Tashiro played Wirewood Elf and a morph, and Finkel brought out Severed Legion. Berserk Murlodont gave Tashiro a bigger beatdown creature, and his morph attacked for two damage. The Legion attacked back, and Finkel summoned Ascending Aven. The race was on, and Tashiro seemed to be ahead after playing Treespring Lorian. The Aven and Legion attacked for five, and Finkel only had Mistform Dreamer and Withered Wretch to hold down the fort.

Tashiro attacked with his team, and the Wretch chump blocked the Lorian. Finkel swung back for seven, and played another Withered Wretch along with Soulless One. Tashiro morphed up Undorak on end step, untapped, and attacked with all his creatures. The Undorak and Lorian were blocked, and Tashiro unmorphed an unblocked Slateback to get enough damage through to win the game. 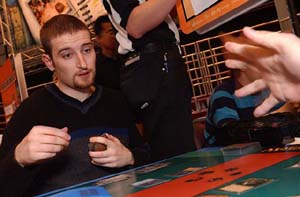 Finkel played a two-drop in Withered Wretch, and Tashiro played a Wirewood Herald that chump blocked right away, searching out Patron of the Wild. Embalmed Brawler came out as a 4/4, and Tashiro played a morph creature. Finkel's team attacked, and the morph (Nantuko Vigilante) traded with the Wretch. Festering Goblin and Nantuko Husk made Finkel's board look even better.

Tashiro merely had a morph, which blocked the Husk and traded with the Goblin. From this point Tashiro was forced into unfavorable blocks to stay alive, and had only Needleshot Gourna for defense. Echo Tracer bounced it back to clear the way for a lethal attack.

Once again Tashiro had a second turn Wirewood Elf, and brought out Goblin Sledder along with a morph creature on turn three. Finkel summoned Severed Legion, and took three on the chin when Tashiro attacked. Another morph joined Tashiro's side, and Finkel went for the evasion plan, attacking with the Legion and summoning Mistform Dreamer. Tashiro kept pounding the ground, attacking and bringing out another morph creature. Finkel would need something to hold back Tashiro's attack if he wanted to win, and got it, playing Crypt Sliver and Festering Goblin. Wave of Indifference stopped all blockers, and Tashiro attacked with his team, bringing Finkel down to four life points. On the following turn he attacked with all his creatures once again. 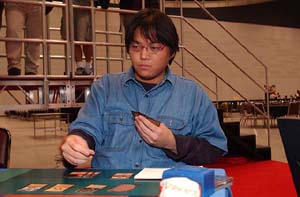 Thanks to Mistform/Sliver tricks, combat didn't quite work in Tashiro's favor, as he lost three creatures to Finkel's two. Tashiro followed up by playing Symbiotic Elf- he had Chain of Plasma in hand, and was trying to force through the extra point of damage so that he could finish Finkel off. It is very likely that Tashiro should have waited to use Wave of Indifference until he had enough damage on the table, since Finkel did not have a significant clock putting pressure on Tashiro.

Actually getting that last point through would prove to be quite difficult. Finkel played two more creatures on the ground, and attacked with his Dreamer. Severed Legion followed, and a second Crypt Sliver along with Smokespew Invoker and eight lands made Finkel's position even better. Tashiro had Snarling Undorak, but it was well contained unless Tashiro had a Vitality Charm to give it trample. The Invoker ended up blocking in Tashiro's next all out attack (Finkel seemed to know that he couldn't go down to three), and it died, and Tashiro was left with Undorak as his only creature. Finkel played Havoc Demon to finish the job.