You can always trust Jonny Magic to come back to a Pro Tour ready to win. Other Hall of Famers often come out to enjoy the weekend with friends, but don't work too strenuously to prepare themselves for the event. They're here to have fun. To Jon Finkel, winning is fun. We saw his triumphant return last year at Pro Tour–Kuala Lumpur, but that was draft, his area of expertise. This weekend he's stumbled on the Block constructed portion of the event.

Facing him at 7-3, playing for the winner of the pod and virtually to stay in contention for Top 8, was Michael Jacob. Best known as the U.S. National Champion who led a team with Sam Black and Paul Cheon to victory at Worlds in Memphis. Now a Pro Tour Fixture, he's looking for his first Pro Tour Top 8.

Jacob won the die roll and chose to draw. They both played out three lands without making a move, and Finkel got on the board first with Kozilek's Predator. Jacob answered with a Makindi Griffin, and when Finkel turned his monster sideways, Jacob made a face. He let it through with a grumble, unwilling to risk his Griffin. Finkel made no play on five land and two Spawn, and passed the turn. 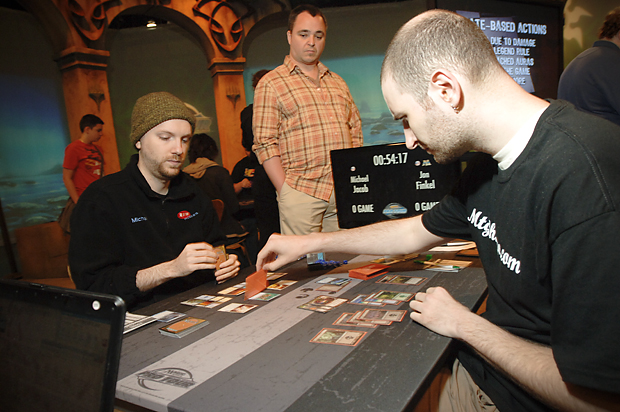 Jacob swung in for 2 in the air and played Guard Gomazoa. Finkel removed it at end of turn with Induce Despair, flashing the Ulamog's Crusher that came into play on his turn. Jacob was unconcerned. He had Narcolepsy in hand for the 8/8, and Domestication for the 3/3, leaving Finkel with lands and a tapped Eldrazi.

Finkel untapped and cast Essence Feed, bringing the life totals to 19 to 11 in his favor. Jacob crashed in with his two creatures for 5 damage and passed the turn. Finkel made no play and took another 5 from Jacob's creatures. This time, Jacob added Dawnglare Invoker. Finkel cast a second-main-phase Might of the Masses on his stolen Predator, hoping to free it. Jacob allowed it, and took the opportunity to add an Eland Umbra to his Invoker.

Finkel's next move was Shared Discovery, tapping the Predator and three Spawn. It served up Guul Draz Assassin, and he put into play and stacked three levels on it. Jacob Regressed it at end of turn and knocked Finkel down to 5. Finkel recast the Assassin and took another hit down to one.

Jacob was content with his Dawnglare Invoker and eight mana. When Finkel went to put the last level on Guul Draz Assassin, Jacob locked his team down. Finkel used the Assassin to give the Invoker -2/-2, and then Induced Despair, showing Gloomhunter to kill it and its Umbra in one stroke. Then came the Gloomhunter and a Boar Umbra to buff it up. It looked like Finkel would wrest victory after all.

Unfortunately for him, it was not to be. Jacob had held onto goodies while he busied himself with the Invoker, and now he cast a second Makindi Griffin and a Narcolepsy for the Gloomhunter. Unable to deal with both attackers, Finkel conceded on the following turn.

Finkel also chose to draw, considering the relative slowness of both decks. Jacob got onto the board with a second-turn Ikiral Outrider and shrugged, saying, "He gets a bad rap—he's not as bad as people say."

Finkel made a Prophetic Prism and passed. Jacob upgraded his beats with a Dawnglare Invoker and attacked, then hit for 3 the following turn after Finkel cast Growth Spasm. He was stuck on two Plains and a Mountain, and cast Kor Spiritdancer. Finkel cast a Gloomhunter that forced the Invoker to stay out of the battle. Eland Umbra gave Spiritdancer a boost, and Jacob hit for 3 more. At the end of turn, Finkel dispatched the Invoker with Leaf Arrow. 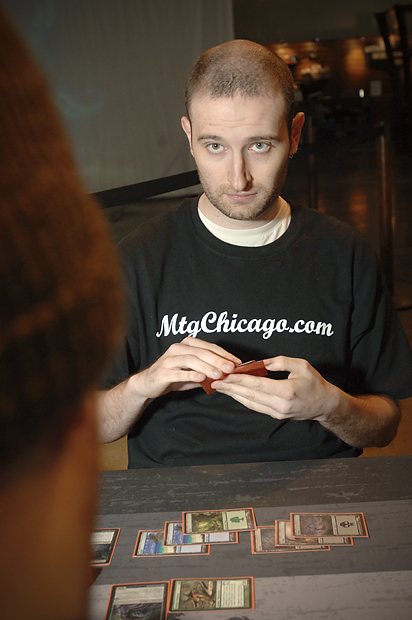 The Spiritdancer was a 2/8 thanks to Eland Umbra (a.k.a. Form of the Deer), but Finkel had Ulamog's Crusher to go with Induce Despair to put it in the bin. Jacob gave his Outrider a Hyena Umbra that came a turn late and swung in, but Finkel just played a second Induce. Jacob gave Finkel's Gloomhunter a Lust for War and passed. Finkel cast Essence Feed, then sacrificed a Spawn to get blue out of his Prism, tapping the rest of his team for Shared Discovery. Jonny Magic can't resist Ancestral Recall.

Jacob had no play. Finkel tried Broodwarden and swung in, but the attack was blunted by Regress. Unfortunately for Jacob, he had no follow-up, and so the next time the Broodwarden came down, Finkel was free to Might of the Masses for the win.

Jacob, on the draw, looked at a one-lander and shipped it back, peeking to see if he would've gotten there. His six were acceptable, and they were off. Jacob was first on the board with Ikiral Outrider and Guard Gomazoa. Finkel accelerated with Kozilek's Predator, then answered a Makindi Griffin with Sporecap Spider. Jacob played Kor Spiritdancer and then cantripped Eland Umbra.

They traded a few turns just playing out lands, with Jacob slowly leveling his Outrider. Eventually, Jacob found Narcolepsy for the Sporecap Spider, drawing an extra card for extra unfairness. Finkel played Essence Feed and passed with five Spawn in play. Jacob attacked with his three 2-power creatures and got past the Predator for 4. His Outrider leveled to 3.

Finkel tapped seven and laid down All Is Dust, but Jacob was ready with Lay Bare, exposing the rest of Finkel's hand. It was a good one: Frostwind Invoker, Naturalize, Gloomhunter, Guul Draz Assassin and Broodwarden. Jacob untapped and gave his Griffin a Hyena Umbra, then leveled the Outrider to maximum and attacked with both. Finkel declined to block and fell to 12. He untapped and cast the Assassin, leaving six land (one of them a Swamp) untapped.

Jacob attacked with his Griffin and Outrider. Finkel tapped three for Induce Despair, showing Broodwarden, but Jacob's boarded-in Affa Guard Hound leapt to the rescue. Finkel let the Outrider through and took 3. He Naturalized the Hyena Umbra at end of turn, then untapped, cast his Broodwarden, and gave the Assassin a level. 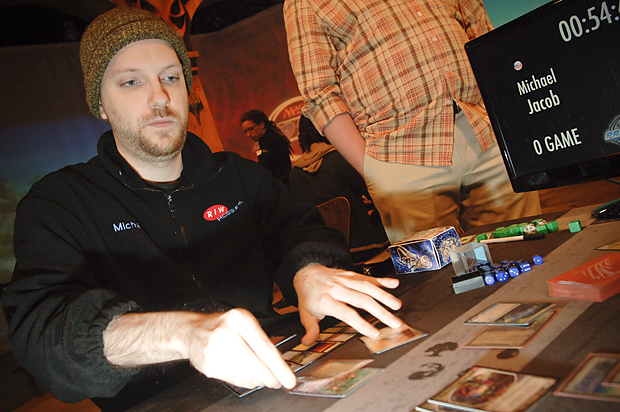 Jacob was ready with a backbreaker: A second Kor Spiritdancer and Domestication to steal the Assassin, drawing two cards. He hit Finkel down to 7 and played a threatening Halimar Wavewatch. Finkel gamely summoned his Frostwind Invoker and Gloomhunter. Jacob got the Broodwarden Lusty, drawing two, played Dawnglare Invoker and started to level his Wavewatch.

Finkel would get one more turn. If he could peel Might of the Masses, he would punch through enough damage to steal the game. He slowly drew his top card, but then started flicking his cards in hand, a sure sign he didn't have it. Sure enough, he cast Leaf Arrow on the Invoker, sent his team to the air and swung all out, hoping that somehow Jacob would let lethal damage through. He did not.