Both Pascal Maynard and Patrick Cox have had a pretty decent go of things in this last year or so. Maynard was a member of the Canadian National team this past year, finishing 37th individually and helping Canada to a 5th-place finish. His opponent, Patrick Cox, just braved a slew of the biggest grinders in the game to take home the title at the StarCityGames.com Open Series Invitational.

Cox was the first to break the ice with a Gust Skimmer on the first turn, but Maynard dealt with it with a Contagion Clasp. He followed that up with a Blightwidow while Cox was stalled on lands. He eventually found the third land he needed for an Alloy Myr, but it allowed the Blightwidow to hit, turning the Clasp into a clock. Maynard protected his side of the board with a Pristine Talisman and a Wall of Tanglecord. Cox made an Ogre Resister, but it fell when Maynard attacked in with his Widow. Cox blocked it, and Maynard had the Unnatural Predation to finish it off. 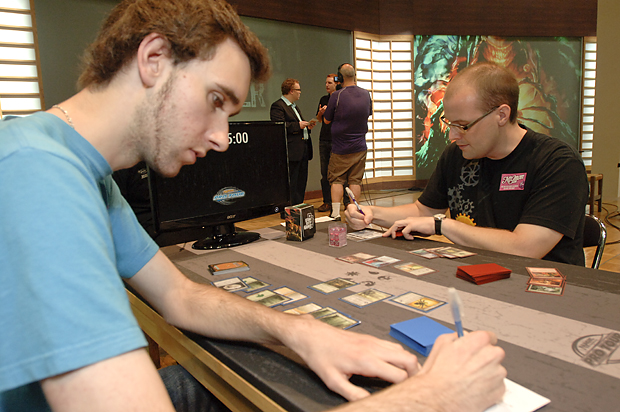 Cox tried to build a defense with a Treasure Mage to fetch a Darksteel Sentinel, but he wasn't able to get above three lands. He had to settle for a Myr Galvanizer while Maynard increased his infectious army with a Shriek Raptor. Cox found a fourth land for a Turn to Slag for the Raptor, but not before it took him to six poison. Maynard had many lands, and couldn't fight through the little defenses Cox had set up on the ground with just a Blightwidow, so he just sat back to proliferate his way to victory.

Finally, Cox had found enough land to start doing things but it looked like it might prove too late. He played Blue Sun's Zenith for four, hoping to draw into some goods. He added a Soliton to his team, but the Clasp did its job, grinding away and slowly killing Cox. Eight counters. Nine counters. Ten.

Between games, both players reached for their sideboards. Cox exchanged one card, while Maynard went back for four, which prompted Cox to joke, "You must have one hell of a sideboard."

Cox chose to go second this game, which has been increasingly popular in this format considering how "grindy" it has become. Every edge counts, and most people don't want to miss out on that extra card.

Maynard started out fast, using Mycosynth Wellspring to get a land before playing Priests of Norn, which was countered by Psychic Barrier. He then added a Blight Mamba and a Wall of Tanglecord to his team, which greatly outnumbererd Cox's lonely Gust Skimmer. Cox got in for two in the air while Maynard was tapped out, and he followed that up with a Sylvok Replica. When Maynard attacked with his Mamba, Cox blocked with his Sylvok Replica, forcing Maynard to regenerate. The next turn went the same way, but this time, Cox used his Replica to kill the Wall. After attacking, Maynard made a Shriek Raptor. Cox, suspiciously, just passed his turn. 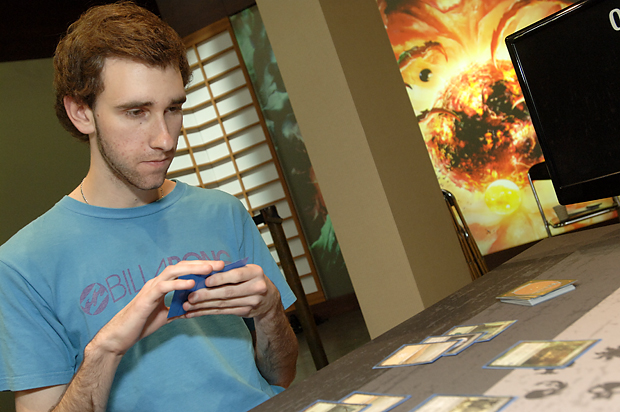 Maynard is keen to win.

Maynard attacked in with his two infect creatures. Cox snuck a Spire Monitor out and tried to double-block the Raptor, lest Maynard have a pump spell, but Maynard pointed out that the Skimmer didn't have flying and Cox was tapped out. Instead, Cox just stuck the Monitor in the way. Fortunately, Maynard didn't have the spell, and his creature bit the dust. Maynard added a Rotted Hystrix to his team after combat and passed it to Cox.

Over the next couple of turns, Cox built an advantage, adding a second Spire Monitor and an Ogre Resister to his team while Maynard made nothing. He did deal with the Gust Skimmer with a Divine offering. Maynard held his Blight Mamba back one turn to block the Ogre Resister, making sure it couldn't attack through the Hystrix in the future. With that taken care of, he went back to work poking away with the Mamba. Unfortunately, Cox was attacking faster, and Maynard was soon in trouble. He used a Gitaxian Probe to tell the future and saw a hand with a two copies of Steel Sabotage, Soliton, Blue Sun's Zenith, and Numbing Dose, which got a read from both players.

"Both of us have to read the card. That shows how good it is…" Cox said with a smile.

In addition to reading cards, Maynard could read the signs and knew the future looked bleak. After two more attacks, with no Blightwidow to save him, Maynard was dead.

This time, it was Maynard who chose to draw. He tried to stick the first permanent, but his Pristine Talisman was stopped by Steel Sabotage. His follow-up Priests of Norn stuck, and started to poke Cox. Cox had a Skinwing to defend himself, but Maynard dealt with that with a Divine Offering. A Porcelain Legionnaire soon joined the Priests, and it ran over a Myr Sire and its progeny on the way to Cox. 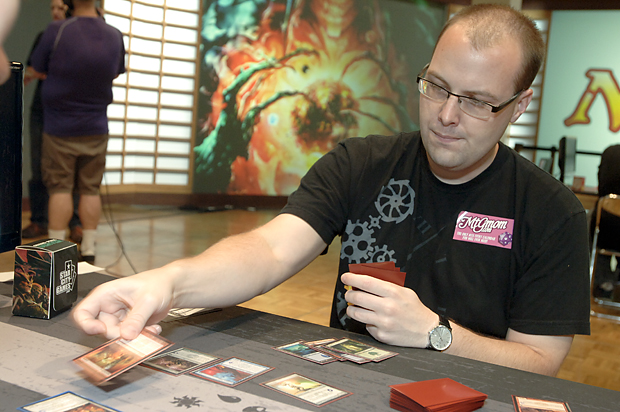 Cox took to the skies with a Spire Monitor at the end of Maynard's fifth turn. A Wing Puncture took care of it before it could get in the way, and Cox replaced it with a Gust Skimmer. Maynard tried to deal with that with an Acid Web Spider, but Cox had a Psychic Barrier to counter it. Cox added a Lumengrid Drake to his side on the following turn, but it was matched by a Shriek Raptor on Maynard's turn. Cox wasted no time in using Turn to Slag on it, trying to limit the number of infect creatures Maynard had on the board.

Unfortunately for him, Maynard added two more on his next turn: a Blight Mamba and a second Priests of Norn. When Maynard went to attack on the next turn, and Cox once again chose not to block, an Unnatural Predation sealed the match.