Round 11: Justin Muir vs. Andrew Corney 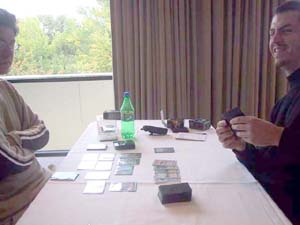 Both these mainstays of the Australian Magic community were about a match out of contention, but it gives us the chance to look at a couple of decks that we haven't seen much of today – looter/green madness (Muir) & domain (Corney).

After Andrew taking a mulligan, Justin begins with a second turn Wild Mongrel (his creature base is new to the opposition deck), while Andrew tries a Rampant Growth. The same happens in the third turn with a second mongrel coming out and Andrew gaining full domain. The second attack by Justin is made for 5 with a Basking Rootwalla but it appears he may have over extended as Andrew drops a second Plains for the Wrath of God.

Justin plays a couple of Merfolk looters 1 of which was Evasively Actioned (for 5!) as Andrew seems a little lost for what do next. Justin plays his Basking Rootwalla via the Looter gaining the Memory Lapse for the Ordered Migration that Andrew eventually drew into, which was followed the following turn with the real Counterspell. 2 hits from the 'walla have brought Andrew down to 11 by the time the collective Restraint hits the table. At which point the looter and 2 Cephalid Coliseums are working their fullest and Justin is happy to pay 5 for the 4/4 Arrogant Wurm to attack. Andrew's subsequent efforts at resolving a Global Ruin resulted again in a lapse and a subsequent counter. After getting to Domain so quickly it should be noted that Andrew had 3 land and a Harrow in his hand when he died. 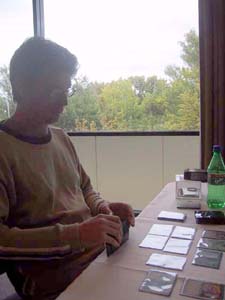 The land doesn't come as easy this time for Andrew as Justin gets a very quick start cast a Basking Rootwalla on the first and second turns. Andrew knows he must resolve a Collective Restraint and when it lapsed twice he fears a repeat of the first game. His fears are unfounded as all the lapses serve is to get another couple of attacks in with the 'wallas. When a 4th turn looter is followed by a Fact or Fiction, Justin is able to take 4 land over a Circular Logic, knowing he can filter them through his looter. Followed by another FOF, this time in his own main phase, both he and Andrew know that the Opposition taken on its own will mean Andrew's next play maybe his last.

Andrew ponders for some time on this decision as he finally decides to play Ordered Migration (for 3), and Justin responds with an Arrogant Wurm and the pending Opposition - enabling him to lock 3 (eventually 4 with another looter) of Andrew's lands. With no more land coming and his 3 1/1 birds giving a 4/4 trampler a 7 life head start Andrew falls in 4 turns, this time a lack of land being his downfall.