Round 11: Kai Budde vs. Seppo Toikka 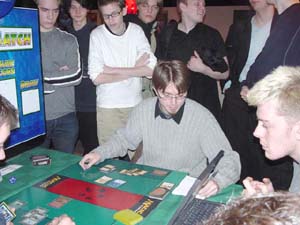 Both of these players are 8-2 coming into the round, but Seppo certainly wasn't confident of his chances. Kai has an amazing red-blue deck with Rorix Bladewing, Arcanis the Omnipotent, and Blistering Firecat to name a few. The Finnish player is White-Blue, but at least he does have Akroma's Vengeance, the new Nevinyrral's Disk.

Seppo went first and made a Gustcloak Harrier on his third turn. Kai made a Morph and so did Toikka as he missed the fourth land drop. Budde played a Goblin Sharpshooter, and chose not to block when Seppo attacked, since he wanted to get maximum usage out of the Goblin.

Kai made a Morph guy and attacked, Seppo decided not to block. The German then revealed his Morph to be Riptide Entrancer allowing him to steal Seppo's Morph, and also use his Sharpshooter to kill the Gustcloak Harier. Toikka kept it alive with a Piety Charm.

However, Seppo had still not managed to find a fourth land, and had to sit idly by as Kai drew and cast his Rorix Bladewing. This must rapidly be becoming one of Kai's favorite cards since he had one in his sealed deck yesterday. With no answer for the dragon, Toikka scooped 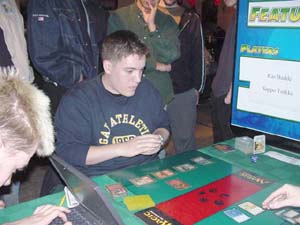 Seppo went first, and summoned a Glory Seeker on turn three as he had just drawn it. Kai had a Sharpshooter again along with a Morph. The Morph blocked Glory Seeker, allowing Kai to shoot. Seppo made a Gustcloak Harrier and a Mistform Wall while Budde did nothing.

After they had attacked once, Kai got to six mana and dropped Arcanis the Omnipotent, radfically altering the outlook of the game. Budde then used Ixidor's Will to counter Aven Fateshaper, drawing a comment about how playable the card was from Seppo. The Harrier continued to attack in the air until Kai put Lavamancer's Skill on his Arcanis.

By this time Kai had drawn Slipstream Eel and Blistering Firecat and although Seppo used Dispersing Orb to deal with Arcanis, he had no way of stopping the others.

After the match, Kai admitted that it was the first time he had drafted this format, although he was very unlucky not to go 3-0