Round 11: Katsuhiro Mori vs. Masayuki Higashino 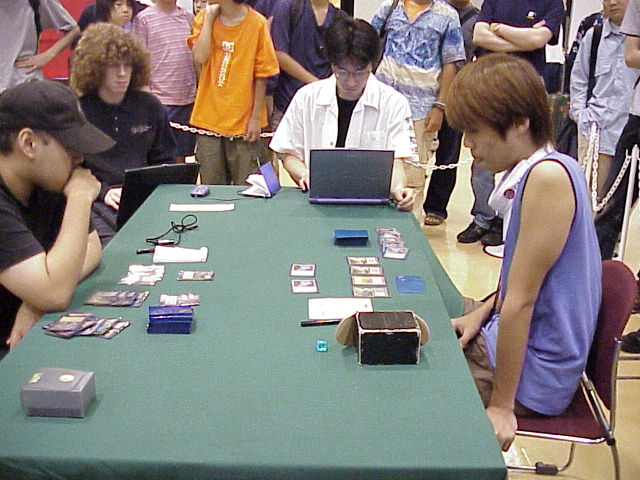 Newly-crowned Rookie of the Year Katsuhiro Mori sat down to his Feature Match wearing his trademark visor around his neck. Across from him sat loveable thug Masayuki Higashino, clad entirely in black. It was sure to be an exciting match, as these are two of Japan's finest talents. Complicating matters was the fact that they were playing the same deck, a Go-Mar/Arena hybrid.

Higashino won the die roll and played first. He hit Mori with Gerrard's Verdict on turn two, catching Death Grasp and swamp. Mori responded with Spectral Lynx. Higashino kept up the hand destruction with Ravenous Rats that scored another land.

Mori went with a little reverse action, dropping a Verdict of his own and stealing Rout and Recoil from the dour Higashino. Higashino wasn't about to take that lying down, and Verdicted away the last of Mori's hand, Dromar's Cavern and Fact or Fiction Mori topdecked a second Lynx and started to brawl.

Mori's Lynxes hit again. Higashino Chumped. His Arena dropped him to nine, but offered up the goods. Rout cleared the board, and Death Grasp waited in the wings. Mori Vindicated the Arena before things got out of hand. It was suddenly a topdeck war.

Higashino got ahead with a main phase Fact or Fiction that gave him Spectral Lynx and Ravenous Rats over a Lynx and two land. The Rats stripped Mori of a Rout. Mori came back with a Fact or Fiction of his own that earned him three swamps and a Dromar's Charm over Phyrexian Arena. Higashino took advantage of his tapping out with a Death Grasp to the dome for five.

Mori played Ravenous Rats. Higashino had three cards in hand, and chose to lose Spectral Lynx over Dromar's Charm and Death Grasp. He topdecked Arena and played it, but Mori was ready with a Charm. Higashino let it go. Mori untapped and played Gerrard's Verdict, and this forced Higashino's hand. He countered with his Charm.

Higashino untapped and aimed another Grasp at Mori's head, this time for six. Mori fell to three. Higashino's hand was empty again. Mori played his last card, Spectral Lynx, only to see Higashino pull a Rout to stop him.

The two players drew lands and put them into play for a few turns. Mori made a Ravenous Rats, and Higashino decided it was worth his topdecked Vindicate. Mori came over the top with a Death Grasp for ten. Now it was Higashino at three.

Higashino found a Fact or Fiction, turning over Yawgmoth's Agenda and four cards that didn't matter. He put the Agenda into play with only two mana up and passed the turn. Mori drew, and busted Recoil on the Agenda. Higashino's empty hand meant that the game-winning enchantment was gone for good.

Three turns later, Mori found an Agenda of his own, and this time Higashino had no ready answer. When his draw phase didn't show gold, he packed up his cards. 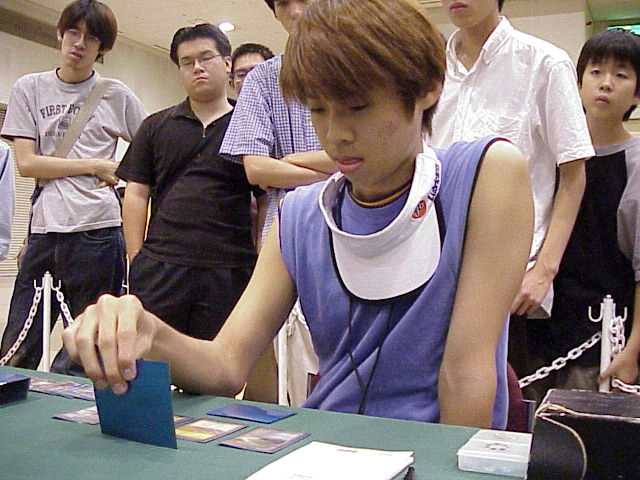 Higashino had to work hard to convince himself to keep his starting hand. It had lands and Urborg Shamblers, but no early action. He was soon under fire from Mori's Spectral Lynx, then lost a Shambler and Death Grasp to Mori's Verdict. Higashino came back with a Meddling Mage to prevent any more Verdicts.

Higashino untapped, but was unable to develop his board. He passed it back to Mori. Mori tried to strip his hand with another Verdict, but Higashino was ready with Dromar's Charm. Mori had grown tired of this nonsense, and so Vindicated Higashino's lone white source.

Higashino's last play of the game was a Lobotomy, which Mori calmly Disrupted. Higashino swept up his cards.