Round 11: Ken'ichi Fujita vs. Satoshi Nakamura 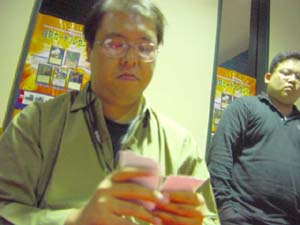 These two might be called the Ghosts of Japanese Magic Past. Satoshi "Hatman" Nakamura, Invitationalist, Pro Tour regular and all-around great guy was the public face. His outgoing nature and outlandish style of dress made him easily recognizable on the Tour. Ken'ichi Fujita, a two-time Grand Prix winner, was the private face. His reticence helps him cut an imposing figure, never mind that he stands a full head taller than the competition. They've since exited the spotlight while the new breed of Japanese pros is on the rise. Clearly, though, they're still in full possession of the skills that helped them become symbolic of pro Magic in Japan.

Nakamura started with a powerful opening of Aquamoeba and then Arrogant Wurm. Fujita ran interference with Nantuko Shade and a Rancid Earth to deprive Nakamura of his island. The Shade chumped the Aquamoeba on its next assault, signalling the Mutilate that was to follow.

Nakamura came back with Wild Mongrel, and Fujita's next play made it seem like the game would be his. Cabal Coffers, Innocent Blood, and a Diabolic Tutor to fetch Mirari. Nakamura could only play forest and pass it back. The Mirari hit. Nakamura pulled a replacement island and summoned Arrogant Wurm.

Fujita seemed to be in a bit of difficulty. He played Skeletal Scrying for three and copied it, falling to seven. The cards were awful. Four swamps, Screams of the Damned and Rancid Earth. He played the Earth on Nakamura's island and gave it back. He drew a replacement just like that, knocked Fujita to three and targetted himself with Deep Analysis.

Fujita drew his card slowly. He peeked at it. It was Chainer's Edict. It took down the Wurm, and then he doubled a Tainted Pact. The first got him an Edict, and the second stopped on a pair of swamps. Nakamura tried to keep things busy with Wonder and replayed his Analysis, giving him plenty of cards to work with.

Fujita Edicted and passed it back. Nakamura made an Aquamoeba. Those cards worried Fujita. He copied a Diabolic Tutor. His first instinct was to get Mind Sludge and Diabolic Tutor, setting up a big win, but if Nakamura held any Rootwallas, he would be giving him the game. Looking at the number of lands he'd drawn, his deck was pretty action-packed. He played it safe, getting Sludge and Mutilate. Sure enough, the Sludge enabled an Arrogant Wurm. Mutilate left Nakamura with nothing.

He topdecked Mongrel, and it was quickly Edicted. Fujita Scryed for two, but wasn't getting any action. Four turns of nothing went by, while Fujita played swamp after swamp. Nakamura's Krosan Reclamation caught the Chainer's Edict in the graveyard, as well as stuffing Fujita's deck with useless Scryings. Nakamura's Rootwalla forced an Edict, and was saved by Aether Burst.

It came back down. Nakamura still had no business. He tapped a Coffers for fifteen and played a double Pact. The first crashed on swamp, Scrying, swamp. The second turned over Rancid Earth, and then Chainer's Edict. Fujita already had one in hand. He turned another card. Rancid Earth.

He was forced to Edict, copy and flash it back just to spare himself the mana burn. Nakamura Speculated for Roars, and when Fujita drew another blank card it was over.

Fujita fanned his remaining library out. It was choked with Tutors, Shades, Pacts and Bloods. 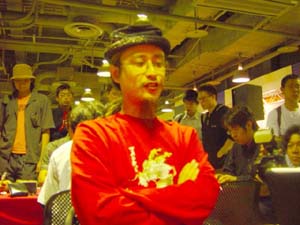 Fujita's opening draw for Game 2 was an utter Gong Show: six swamp and a Diabolic Tutor. He sent it back and drew up five spells and Cabal Coffers. He went to five.

Nakamura opened with Careful Study for Rootwalla and Roar of the Wurm. Fujita came back with Mesmeric Fiend, stealing Arrogant Wurm and leaving Nakamura with nothing but lands in hand. He drew Envelop and swung for three. A second Fiend stole the Envelop. Nakamura hit again, and passed it back. Fujita continued to play out lands.

Other attack and this time Fujita let him have the Envelop back, sparing himself three damage. Nakamura tapped out for Aquamoeba, giving Fujita the window he needed to Mutilate. Unfortunately, there was still the small matter of Roar of the Wurm in the graveyard. Nakamura busted it out, and then protected it from potential Mirari'd Edicts with a Rootwalla in play and two Envelops in hand. Fujita lasted only two more turns.