Round 11: Landing Face Down

kira Asahara is a legend in Japan, but his success on the Pro Tour has never really matched his success in his country. In fact, recently he's been taking time off from the game, but he found a Pro Tour at home too inviting to resist. It's a good thing he did, since once again he's in contention for filthy lucre and phat lewt. Yo. His opponent this round is Andre Coimbra, road warrior, goof ball, and professional Magic player. Andre and his Blink Riders deck generated a great deal of excitement yesterday, and it's nice to see the Portugueser still doing well with his original creation. 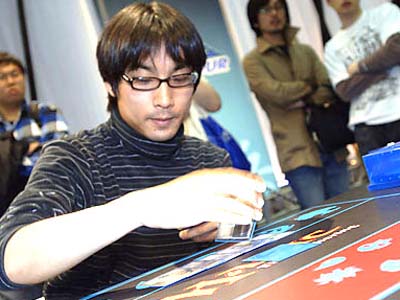 Coimbra had to mulligan his first hand because two Momentary Blink were the only action cards. His second hand was a little better and delivered the lands required for a third turn Shadowmage Infiltrator, which Asahara matched. So much for making up the extra card via Jonny Magic. Two turns later Coimbra Voided for 3, nailing a second Finkel from Asahara as well as two Phyrexian Totems in hand while only losing a Finkel of his own. Asahara ripped another Finkel off the top, just like old times, forcing Coimbra to Void it away again. At this point both players slowed down a bit, thinking through their next steps carefully. Asahara played a morph, while Coimbra struck back with Avalanche Riders. The creatures swung past each other, kicking off the damage race, but a second Riders gave Coimbra the upper hand, and he suspended Riftwing Cloudskate to boot. Meanwhile, Asahara was still trying to rebuild his hand after the Voids—he didn't have seven mana available to flip his Brine Elemental or bring Urza's Factory online, meaning he needed action from his hand (and soon) if he was going to survive.

Damnation was just what the doctor ordered, allowing Asahara to clear the board of creatures at 4 life, while Cancel made certain the Riftwing Cloudskate was not a problem either. Coimbra shrugged affably and reloaded with a morphed Akroma, Angel of Fury… or so I thought. Asahara played another Damnation, and when Coimbra flipped over the morph, he revealed that he had accidentally put Shadowmage Infiltrator face down instead, earning a game loss for Gameplay Error – Game Rule Violation in a game that he likely would have won.

Game 2 started like Game 1, except this time it was Coimbra that cast the Finkel first, while Asahara followed with a morph as his three-drop. Avalanche Riders whacked an Island from Akira, and the Japanese player was forced to discard on his turn after turning his Doppelganger into a Finkel to try and draw another land. Void for three cleared the board again, and then Void for five left Asahara with one card in hand. Coimbra was whipping Asahara like a red-headed step-child (undoubtedly a rarity in Japan), but somehow Asahara had drawn two lands in a row and now had two morphs on the board as well. Thankfully for Coimbra, unabated Lightning Angel beats finished the game and he evened the match at one a piece. 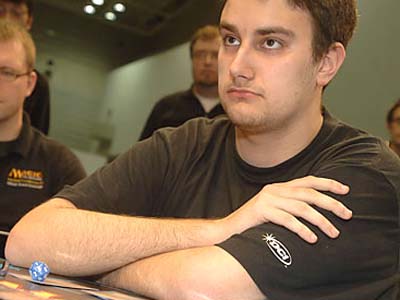 Coimbra opened the action for Game 3 with Riptide Pilferer and Sulfur Elemental, matched by a morph and suspended Aeon Chronicler for Asahara. Coimbra played a morph of his own, but Asahara stayed ahead with the Chronicler coming into play as a fatty and then two more morphs following it onto the board. With the life totals 14-13 in his favor and seven mana on the board, Akira pushed his three morphs into the red zone, daring Coimbra to figure out how to block them. The Portuguese player sat back in his chair and pondered, eventually blocking the middle morph with his Pilferer and Sulfur Elemental, choosing correctly that it was the Brine Elemental but losing both creatures and earning a turn of Exhaustion in the process while dropping to 9. One attack later, a second revealed Brine Elemental finished the job. Coimbra's brief mental error in Game 1 likely cost him the match.