Round 11: Let the Pummeling Begin

Before the match, I had to concede to Randy Buehler that the name Boros Deck Wins is going to be the one that sticks for Tsuyoshi Fujita's latest concoction - no matter how much I try to make Richmond Shogun to happen.

"Boros Deck Wins is the logical descendant of Red Deck Wins, which is the deck he and Shuhei played in Columbus. Richmond Gun is just too obscure a reference," Randy explained. 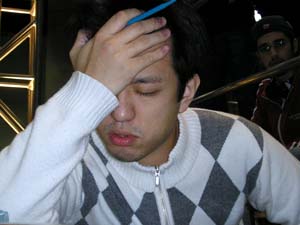 Lost in thought, Fujita focused once the match started.

Tsuyoshi Fujita and Olivier Ruel were squaring off in a matchup between Boros Deck Wins and Erayo Affinity. The Top 8 was in sight for both players; Tsuyoshi was 9-1 while Olivier was lagging just behind at 8-1-1.

This match had the potential for serious ramifications for both players beyond simply who plays Sunday and who does not. With such a tightly packed bunch at the top of the leaderboard for Player of the Year, the opportunity to trip someone up could not be taken lightly. Of course, easy-going Olivier takes everything lightly … even when running up against this tournament's buzzsaw sitting in the feature match for the third straight round.

Olivier peered at his friend ad gauged the PoY race, "How many?"

Tsuyoshi informed him that he had 46 points. "Maybe. I need four wins for Top 8 and he needs three. Concede, Tsuyoshi?"

Fujita pretended to thing about and then put his hand behind his head to indicate it was time to play Junken for choice. Junken is the Japanese word for Rock, Paper, Scissors. After both players matched Rock for two straight attempts Olivier tried mixing things up with Scissors. Tsuyoshi stuck with Rock and smashed them. That's the way things have been going for him this weekend.

Fujita started at his traditional 17 life and made Grim Lavamancer and Savannah Lions on the first two turns. Olivier had Arcbound Ravager from Olivier. Tsuyoshi tried to Lava Dart it and Olivier smiled and saved it with Scale of Chiss-Goria. 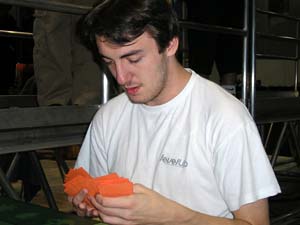 "Eleven rounds - this is the first time I use it."

A Firebolt drew another Scale from Olivier's hand and he sacrificed the first one. He was unwilling to commit all his lands to save it from Grim Lavamancer and let it go. Olivier untapped into Talisman and Myr Enforcer only to have it Pillaged.

Ruel Thoughtcast into Pithing Needle for Grim Lavamancer and followed up with Ornithopter and Plating. Fujita attacked him to 11 and then dropped him to 9 with Molten Rain on a Seat of the Synod.

Olivier cracked for 8 with a Plated Thopter. Erayo came down with no threat of being flipped anytime soon - Olivier was just about out of cards - and picked up the Plating. Fujita just kept on coming and sent his two creatures into the red zone. Olivier blocked Grim Lavamancer with Erayo and used Scale of Chiss-Goria. Fujita Flashbacked Lava Dart to finish it off. Legionnaire took down the Ornithopter. Molten Rain on another Synod dropped him to two. With no creature to stand down the Lion, they moved to the second game.

"He has the Kataki's main," groaned Olivier. "That matchup was even worse than I thought." With Purges and Flametongues coming in it was not going to get much better. Olivier looked at his Erayos, "For once these are good I don't have any trouble knowing what to take out. He was bringing in two Cabal Therapy, three Darkblast, and a .

Olivier saw the key play in that game as his decision to stray from Rock. "I probably win that game if I hadn't played scissors when we played Junken." 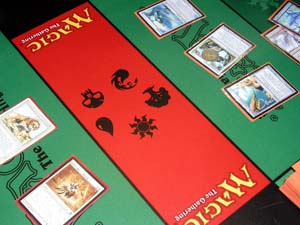 Not a pretty view for an Affinity player.

Ruel had a turn-two Arcbound Ravager and Frogmite but Tsuyoshi played Kataki, War's Wage. That was game. Ruel put all his eggs onto his Frogmite and had one turn to draw Blinkmoth Nexus…and not have Fujita be holding a Purge. We'll never know what he was holding because there was no answer to the white legend and Ruel conceded during his third-turn's draw step.

"I have dealt with so many Katakis this weekend. I had to die to it sometime."