Round 11: Living the Suite Life

the 2005 season, reigning Player of the Year Kenji Tsumura seemingly could not win a match with 40-card decks. After winning the title on the back of his dominant Constructed performances, Kenji vowed to improve as a Limited player for this current season. He even began to make plans for Richard Hoaen to travel to Japan so Kenji could study at the feet of a true Limited master.

Two Limited Grand Prix wins and another Top 8 later for Kenji, Richie was out one free trip to Japan. The only problem for Kenji is that those three tournaments have contributed more than half of the Pro Points to his tally for the current season. If he was going to make a serious run at maintaining the lifestyle he has grown accustomed to as the Player of the Year, Kenji really needed to squeeze a healthy portion of points out of this event.

Kenji Tsumura takes advantage of the luxury suite his Player of the Year status entitles him to.

Tsumura just managed to squeak into Day Two with two losses. He took another loss in the first round of Day Two action (which took place on Friday). Despite being on the bubble of Top 8 contention, Kenji exuded nothing but the confidence of a man whose losing ways have changed for good.

His opponent for this round was Seattle native Mike Thompson. Mike is one of those players who always seem to be threatening bigger and better things, spending more and more time on the right side of the Day Two cut. His best finish saw him reach the Top 8 of Grand Prix - Austin. Like this weekend's affair, Austin was one of the earliest events to use a new block - in that case, Champions - in Limited. Also sitting at X-3, Thompson was hoping that he could put his early adapter skills to similar use. 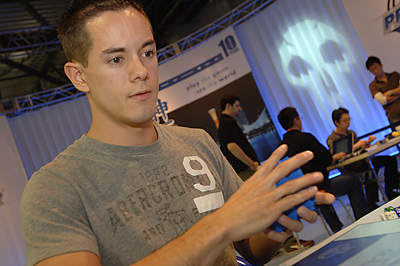 As they shuffled for the first game, Kenji shifted uncomfortably in his chair, looking around to see if there were any other options. Not seeing any he finally just propped himself up by folding his legs under himself.

"You don't like the chair?" asked Thompson. "Is it too big? Need a phone book? A pillow?"

Perhaps being punished for needling the smaller player, Thompson had to mulligan his opening hand. He kept the subsequent six and suspended a Keldon Halberdier. Kenji had cornered the market on suspend, though, as he dumped out Errant Ephemeron, Riftwing Cloudskate, and Viscerid Deepwalker (aka "Waterbreather") on the next two turns.

Thompson had Sangrophage on turn three. Kenji was content to wait for his spells to resolve in a couple of turns. He Cancelled the Halbedier and Temporal Eddy'd Thompson's turn five Skittering Monstrosity. It was bounced again on the next turn when the Cloudskate hit play alongside the Ephemeron. That was enough for Thompson, and they moved on to Game 2.

As the two players drew their opening hands, Kenji paused before looking at his seven cards. He closed his eyes, took a deep breath, and waited for a beat before assessing his hand as keepable. This is a meditation technique he uses before every hand to make sure he approaches the hand with a clear mind and total focus. 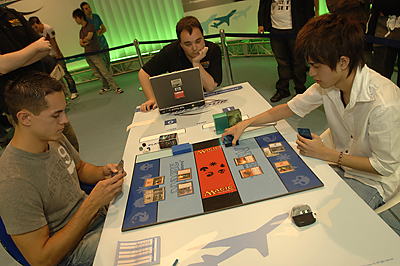 Thompson seemed pretty calm until he looked at his own seven but decided to keep a land heavy draw. Goblin Skycutter led off but was stalled by Aetherflame Wall. Skulking Knight was up next, but it was also trumped - this time by Flowstone Channeler.

Smallpox cleared the Wall and the Knight on either side of the board, but Thompson had nothing to follow up with. The Channeler untapped to kill the Goblin and then proceeded to beat in while Kenji waited for an Ephemeron to come online. Thompson attempted to strip Kenji's hand with Haunting Hymn but all he did was tap some lands and draw out a Cancel.

Eventually the Channeler was shut down by Feebleness, but by then the Ephemeron had swooped in to do the whole big fat flier thing.