Round 11: The Luck of Rosewater

ames Hustad and Gaudenis Vidugiris hail from Madison, Wisconsin and had tested the format with Pro Tour-Geneva champion Mike Hron. While not as famous as their compatriot, both have previous Pro Tour experience. Their opponents for this round, Masami Kaneko and Genki Taru, have plenty of Pro Tour experience as well with 12 appearances between them. While not as famous as some of their other compatriots (like Kenji Tsumura, sitting elsewhere in the feature match area), with 24 points going into the round they're threatening to be the next breakout stars from the land of the rising sun. 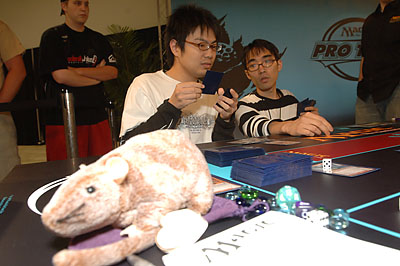 Time will tell how the luck of Rosewater the Rat fares for Vidugiris and Hustad.

Before the match began, Jim put a good luck charm on the table: a plush rat named Rosewater signed by Mark Rosewater.

With a language barrier separating the teams from directly communicating with one another, they still managed a communal laugh as the Americans inadvertently spill a bag of counters and dice on the table. The laughter for the Americans came to an end as they lost the roll.

Kaneko wasn't happy with his opening hand and sent it back for a free seven. His second seven was as upsetting as his first and with a disappointed sigh, he was forced to ship for six. After much consideration and a groan, he opted to keep the slightly smaller hand.

Fortunately for him, both Gaudenis and Jim had to mulligan. The two players were pretty upset with how their draft had gone and opted to put together two very aggressive decks.

After serious debate, both Madisonians opted to keep their second set of seven, and the game begins.

The aggro players were first out of the gates with a Keldon Halberdier suspension from Jim. Not to be outdone Kaneko dropped an Augur of Skulls off of two Swamps. He passed his next upkeep without sacrificing it, however. After a look at his hand, it became clear why: he was holding all red cards with no Mountains to cast them. If he and his teammate were going to survive against the Onslaught of two-drops surely headed their way, they would need the blocker around to buy time until Masami's cards went live.

After a few turns the life totals stood 30-28 in favor of the Americans. Kaneko remained color-screwed, though he did have plenty of Swamps with four. The Japanese board position consisted of an Augur of Skulls and Pallid Mycoderm with an unkickered Citanul Woodreaders they had played early on dead after blocking and being Sunlanced.

Jim and Gaudenis on the other hand were sitting on a mysterious morph, a Kavu Predator, and the Keldon Halberdier on a single counter. A turn-two Keldon Marauders had been blocked and then died, getting in a Shock's worth of damage. The large bodies of their opponents' creatures were screwing up their beatdown aspirations, but after the Mycoderm blocked a Kavu Predator Jim revealed his morph to be Shaper Parasite, finishing the problematic Saproling generator off.

The Japanese were not going down without putting up a fight. It seemed as though all of their creatures were perfectly designed to defeat a beatdown strategy clocking in with smaller power but beefy toughness, or having regeneration like Augur of Skulls.

The Americans decided to make a move. Halberdier entered play on their upkeep. Mike played his fifth land, giving him enough mana to play Tarox Bladewing while Gaudenis had Gaea's Anthem. Neither Genki nor Masami were happy to see that, and the combat step was a busy one. The Americans attacked with Thornweald Archer, Knight of Sursi, Tarox, Keldon Halberdier, and Shaper Parasite. Augur of Skulls and Malach of Dawn double-blocked the Shaper Parasite to kill it, but the move was costly. They took 14, leaving the score 30-14 in their opponent's favor.

All was not lost, however. On their turn, Kaneko managed to topdeck the Mountain he needed, letting out a sigh of relief. Taru's Sunlance took care of Tarox and a Flowstone Embrace ended Gaudenis's Thornweald Archer. That was certainly going to help the Japanese get in the game and at the end of the turn here is how the board looked:

Kaneko/Taru: Malach of the Dawn and Augur of Skulls, both with regeneration up.
Vidugiris/Hustad: Keldon Halberdier, Knight of Sursi, Glorious Anthem. 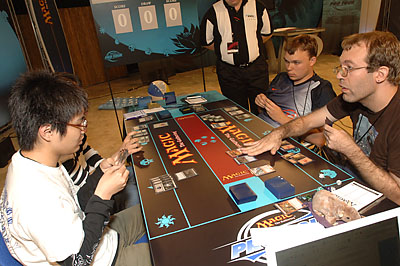 The Americans had to take a break from the red zone and were left building up their forces to hit another critical mass. That meant a Fomori Nomad joined their team, but it didn't promise to be enough as the Japanese players added yet another wall in the form of Penumbra Spider. They also played Deepcavern Imp, then passed the turn to the Americans with regeneration mana up for the Malach.

Hustad and Vidugiris went into the tank after drawing their cards for the turn. They were trying to figure out the best way to get damage through, and had the option of playing a second Shaper Parasite as a morph in addition to an Emberwilde Augur, or Conflagrating the Augur while Kaneko was tapped too low and bashing, then playing the Augur post-combat. Eventually, that was the decision they came to sending Keldon Halberdier, Fomori Nomad, and Knight of Sursi to the red zone.

Kaneko and Taru had to carefully consider their plays. Eventually they decided to put their Malach in front of the 4/1 first striker, then double-block the Nomad with the Imp and Spider. That left Knight of Sursi getting in for three, and the Nomad and Imp traded. After combat Hustad played his Emberwilde Augur, but not until after Gaudenis had played Essence Warden, leaving the life totals at 31-11 in favor of the Americans.

Following his team's game plan so far, Kaneko played yet another 2/4, this time Gorgon Recluse, then cast a Midnight Charm on Emberwilde Augur.

The Americans were spending a lot of time trying to make sure they made the right attack each turn, but that attack repeatedly came down to "swing with everyone." For the second turn in a row, they sent all their creatures in, including a mystery morph (Shaper Parasite), an Essence Warden and Knight of Sursi enhanced by Gaea's Anthem, and Keldon Halberdier. After some consideration the Japanese players chose to block the morph with Gorgon Recluse, the Halberdier with Malach and Icatian Crier, and the Essence Warden with Penumbra Spider. The Knight of Sursi would get through but it remained to be seen whether or not the Madison natives were willing to be so aggressive they'd unmorph the Shaper to give +2/-2 to their own creature to get extra damage in.

The answer? No. The attack left their opponents at 9, but without their Gorgon Recluse to continue getting in the way of the ground pounders.

A post-combat Keldon Marauders from Jim met Taru's Mana Tithe, but both teams had to laugh when Kaneko's end-of-turn Riddle of Lightning on the Knight of Sursi was met with the same from Gaudenis.

Kaneko and Taru were starting to take control, but they weren't out of the woods just yet. An Ironclaw Buzzardiers and Gemhide Sliver joined the American's side of the board while the Japanese could only muster a D'Avenant Healer. The game stood at 34-9 with the Japanese players behind. The creature count was Healer, Malach, and Spider for Kaneko/Taru and Buzzardiers, Knight of Sursi, Gemhide Sliver, and Gaea's Anthem for Hustad/Vidugiris.

Neither of the Americans were making plays, and it looked like Jim was possibly slow-rolling his hand for a huge Conflagrate flashback. Gaudenis, however, had simply drawn three blanks in a row, and could do nothing about it. The Japanese players took the opportunity to go on the offensive using a second Riddle of Lightning to finally ace the Knight of Sursi, then making a Bogardan Rager and Lucent Liminid while attacking with Malach of the Dawn.

Gaudenis ripped his fourth, then his fifth land in a row and the two Americans, frustrated with the turning tides and resigned to their fates, extended the hand.

After the match, Gaudenis admitted he had considered the +2/-2 play with his team's Shaper Parasite stating he felt they had a solid attack the following turn once their Keldon Marauders in play. The Mana Tithe, Jim pointed out, was utterly backbreaking, but he expressed frustration he hadn't managed a second Island during the match, holding onto a Spiketail Drakeling throughout the game. 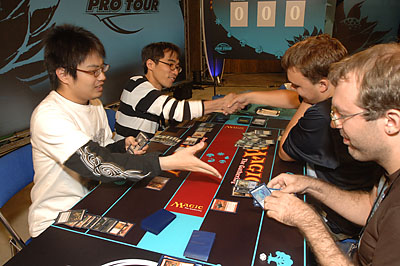