Round 11: Markus Joebstl vs. Christian Luhrs

These two German speaking giants of the game have bizarrely never played in the top flight of competition. Both have put in big results on the world stage, and yet through 4 years of PT Top 8's, Masters and innumerable Grand Prix, the two have never been asked to play spells in anger against one another. 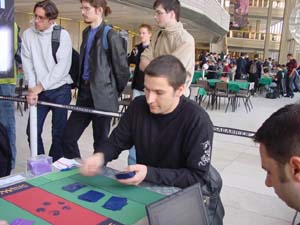 During the shuffling Christian talked about his deck, saying that he thought it was light on removal, and that he had passed some excellent picks during Legions, including Akroma, 2 Daru Stingers etc.

Markus won the dice roll and chose to begin...

Both players opened with turn 1 Goblins, Markus' Grappler provoking Christian's Sledder. Christian then dropped the Sparksmith, which received a cycled solar blast to the head. The morph standoff followed.

On Christian's turn 4, he had no better play than to unmorph his Undorak, attack and pass the turn, figuring that the morphs he really needed to block at this stage were Skirk Commados, which couldn't touch the Undorak. Markus attacked back and added to his board position with a second Morph and a Custody Battle on Christian's Undorak.

Christian handed the Undorak over the table, unwilling to compromise his land count, and made a Cresting Craghorn. Markus decided to keep the Undorak, and swung back with everything. Christian looked perplexed, stating "commandos commandos" before eventually deciding "Kein block". Markus didn't disappoint, flipping the 1st Morph to kill the Craghorn.

Christian placed Crown of Fury on his freshly cast Morph to try and lock up the ground, but Markus went down to 3 lands, attacked with the team, including a 2nd Grappler which provoked Christian's only creature, to put Christian to 4, before making Flamewave invoker. Christian chuckled and scooped his cards.

Neither player even looked at his sideboard before presenting his deck for game 2, but there was some banter about the draft, and Markus' draw in game 1.

Markus came out quicker with a turn 2 Turncoat, but missed his crucial 3rd land drop. Meanwhile Christian developed his board with a Morph and Symbiotic Elf. Markus did find the land the next turn, and made a Morph. Christian's draw was able to capitalize on the missed land drop however, and on his turn 5, he had a Morphed Undorak, a Berserk Murlodont and a Symbiotic Elf in play. 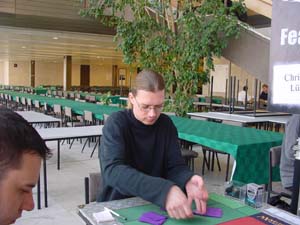 Markus ripped land number 4 off the top and Death Pulsed the Murlodont, before attacking Christian down to 12. Christian unmorphed his Undorak and attacked, before playing a Sparksmith. Markus made a joke about his Turncoat being no good and attacking into the monsters opposite, and in the end Christian decided not to block so his Sparksmith would be better. Markus had the crown of suspicion though, and had bluffed through 2 crucial points of damage to leave Christian on 10.

Christian attacked for 4 with his Undorak before casting Crown of Fury on the Symbiotic Elf. Markus had 4 cards in hand, but a removal spell wouldn't let him force through damage. He attacked with his morph, Christian blocked, and smiled when Markus tapped his 6 mana, to unmorph Skittish Valesk. Markus had not missed a land drop from turn 4 onwards.

Christian attacked with his team of Undorak and Insects to force the Chump block from the Turncoat, and put Markus on 5. Markus won the coin flip over the Valesk and attacked to even the score, while still having mana to make Goblin Machinist as a Racing Blocker.

Christian attacked with the Undorak and an insect token, killing the Machinist and taking Markus to 4. He then made Thoughtbound Primoc which meant Markus would need to remove 2 blockers and win the coin flip to win. Markus won the coin flip on the Skittish Valesk again, and removed the 2 blockers with a Wave of Indifference.

Christian made light of the 2 won coin flips that won Markus the match and the 2 then discussed the draft in more detail, so each would have a better idea of what they might face in the last round of pod one.