Round 11: Masayuki Higashino vs. Itaru Ishida 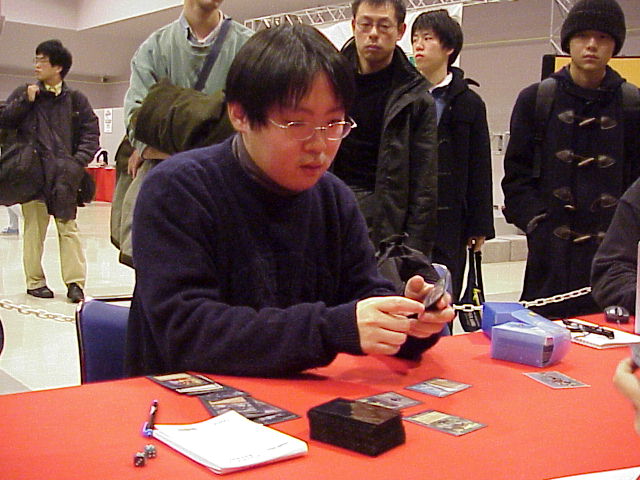 The spectators crowded around as two of Japan's greatest faced off. Masayuki Higashino was hungry for a big money finish, since his last big win had been at Hiroshima in January. A leather bomber jacket interrupts his standard mono-black attire. Itaru Ishida has proven that not only is he the brains behind the renowned Panzer Hunters and Anchans, he can win the big one solo (as demonstrated at the really, really, really big one at Kobe). Ishida decided to run the extremely popular "Wild Zombies" deck championed by the Your Move Games crew. Higashino was with the green/white/black PT Junk deck that put 12 people into Day 2.

Higashino kept a 1 land hand with Pernicious Deed, Contagion, Spectral Lynx, and Swords to Plowshares, and started the rain on Ishida's parade by Duressing Buried Alive from a hand that contained 2 Wild Mongrels, Zombie Infestation, Hermit Druid, Llanowar Wastes, and Taiga. Ishida calmly laid down his Wastes and passed the turn.

Higashino prayed for land, and the gods were kind to him. He topdecked Dust Bowl and oodles of land as Ishida started the rush. Both Wild Mongrels came down as well as a Zombie Infestation. But all these petty affairs failed to amount to much, as Higashino's Deed came down and ruined Ishida's day. 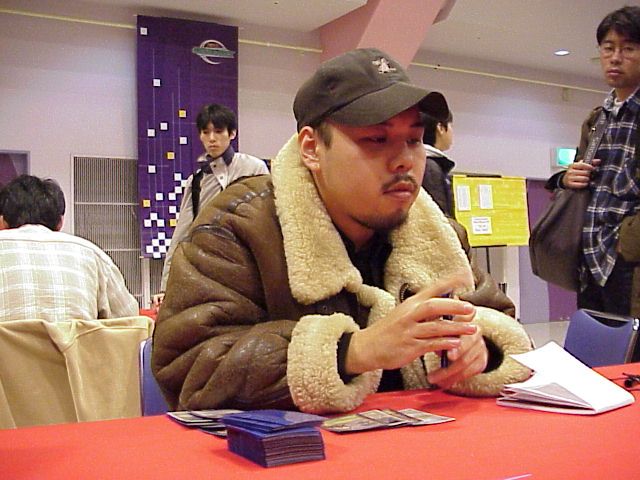 The toll of the mulligan came harshly at the onset of Game 2 as Ishida mulliganed to five. In sympathy, Higashino took one of his own. Content with his hand, Ishida managed to draw first blood with a Hermit Druid. Higashino played a Spectral Lynx, and passed the turn. Little did he know the onslaught of card advantage that Ishida would turn over with his Hermit Druid. Ishida flipped over 13 cards including 2 Ashen Ghouls, a Squee, Goblin Nabob, and a Krovikan Horror before turning over a forest.

The dial was set to 'carnage' as Ishida played a Buried Alive, fishing out more recursive horror for the graveyard. Higashino had another Deed in hand and used it, but Ishida had contacted the Vampiric Tutor with his own cell phone and asked for a backbreaking Ruination. Higashino just couldn't overcome a one-sided Armageddon and the cold, moist flesh of the dead returned to drag Higashino down.

The chill of the grave clung to Higashino's form from the previous game, giving him a rotten, rotten draw. Seven non-lands converted into six lands, though there were a pair of Treetop Villages. Higashino laid a Grasslands to try to cut the number of land in his deck, but it was not to be. Ishida called up the Vampiric Tutor and asked for a Zombie Infestation to hit play on turn 2.

Suddenly the game ended. Higashino begged for a spell but the only non-land spell he drew over 5 turns was Tithe. The combination of Zombie Infestation, Squee, Krovikan Horror, and Ashen Ghoul churned out many, many men to bring Ishida the win home in a jiffy.

3 River Boa 4 Call of the Herd