Tour-London winner Geoffrey Siron tried for the coin-in-hand game against Ben Caumes at the start of the round, to which Ben gave him the full look up and down, before going straight for the hand with the coin in.

He chose to go first, and kept his opening seven, which is more than could be said for Geoffrey, who went down to six.

Caumes led with a Godless Shrine and a smirk, while Siron had a frown and no play, signalling a very risky Karoo land keep. Benjamin built up his mana base with a Rakdos Signet and a Gruul Turf on consecutive turns, but didn't punish his opponent's very slow start.

Siron got a Plains, and eventually a Boros Garrison down, but Caumes had the heartbreaker, in the form of Wrecking Ball, to take Siron back down to zero permanents. Caumes' first actual threat was a Sunhome Enforcer, who on the following turn attacked with two pumps, only to be hit by a Condemn. Geoffrey had two lands in play by this point and pumped the fist as he mounted a fight back.
He played a Sparkmage Apprentice, whose point went to the dome, and then promptly lost it to an Apprentice from Caumes. A Soulsworn Jury came out from Siron, but it did not stop a Roofstalker Wight, who started swinging for Caumes. Azorius First-Wing seemed a better prospect for Siron, who passed to his opponent, looking like he might pull out of one of the worse cases of screw around. Caumes played more land and lost his team to a single Pyromatics from Siron. It was happening.

Ribbons of the Night ensured that Caumes would stay above 20 a little longer (as he had already gained some from Condemn), but he was still more or less out of gas it seemed. Siron tried for a Tattered Drake and hit a Runeboggle, leading to big shrugs from the Belgian.

Benjamin finally felt it was time to play a threat, with Siron tapped out of blue, and he put out an Avatar of Discord. A Lightning Helix on it was promptly hit with Error, forcing a Cackling Flames the following turn from Siron to finally take it down.

Siron by this point had a Terraformer, but was reluctant to attack on the ground in the face of a Vertigo Spawn for Caumes. Instead he took to the air with a Freewind Equenaut. Following the abortive mess that was Avatar of Discord, Caumes restocked with a Train of Thought for two, and played an Ogre Gatecrasher to force the Soulsworn Jury counter from Siron. He then followed up with Rakdos Augermage - who got hit by a Wrecking Ball from Siron at the first opportunity.

Siron beat Caumes back down to 19 with his air swings, and replaced the Jury, hoping to ride some tempo in the air. The ground assault was also allowed to continue, as Pillory of the Sleepless cleared the way so that Terraformer could attack.

"Ce n'est pas possible!" declared Caumes as he drew what was presumably yet another land. 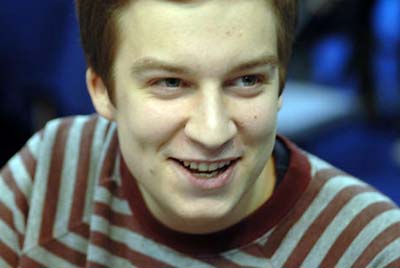 Smug? You tell us.

"I knew I would win this one," remarked what had to be a pretty smug Siron.

Caumes played Consult the Necrosages to draw two, then dropped a Skeletal Vampire, who was countered by Soulsworn Jury. Caumes scooped them up.

For the second game, Caumes chose to draw, and had to mulligan twice. Luckily it seemed that each player had lands in the early game, though it wasn't quite clear if anyone, as Ben had in the previous game, was getting flooded.

Siron led with a Terraformer, who got to sneak in for two before being joined by an Azorius First-Wing. The flyer got hit immediately with a Douse in Gloom, but the Terraformer continued to apply the good beats. A Soulsworn Jury with Remove Soul mana up made Caumes' decisions more difficult, and in the end he elected to draw more cards with consult the Necrosages, and play the innocuous Roofstalker Wight. Blind Hunter from Siron seemed good, and the winner of the last Limited Pro Tour was looking pretty good. He allowed a Viashino Fangtail to hit play, only to Cackling Flames it, and beat with his Bats. They traded with Roofstalker Wight, and haunted Terraformer. Siron led 22 to 16.

Caumes snuck a Goblin Flectomancer under the noses of Soulsworn Jury and passed. Siron did the same. The first play in the mid-game stalemate was a Tidewater Minion from Siron, which was promptly hit by Wrecking Ball from Caumes. A Snapping Drake was countered by Soulsworn Jury, and Caumes hen put out Goblin Spelunkers, to create a little attack force of goblins to attack Siron. 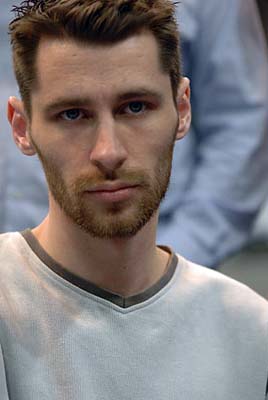 Beats were traded on either side, but it looked like Caumes was drawing better this game, with an Izzet Chronarch to get back Wrecking Ball. Siron played a Tattered Drake in the hope of mounting a defence. Caumes tried a swing with Spelunkers, only to have Siron use Terraformer in order to make his mountainwalk moot, then blocked with his Tattered Drake. He played a Freewind Equenaut, which ate a Wrecking Ball, and passed.

It looked that the last flier might be good enough for Siron, whose Tattered Drake got Caumes to 6, while the haunted Terraformer looked increasingly scary. Tattered Drake took Caumes to 4, then a Wrecking Ball from Siron took down Goblin Flectomancer, who was making life a little complicated. The Flectomancer changed the target to Terraformer, allowing Haunt to trigger, taking Caumes to just 2. Siron then dropped Pillory of the Sleepless, which looked to be game breaking. Caumes played Runeboggle, but there was extra mana open for Siron, so that didn't stop it. The Error half of Trial//Error was somewhat more effective in buying a little more time though.

The extra time bought by Caumes was to no avail though, as his draw yielded nothing, and he extended his hand.