Round 11: Matias Gabrenja vs. David Rood

"I got my deck from his and his friends," David Rood commented before the match, shaking his head. Matias Gabrenja seemed much calmer as he shuffled his cards. "I don't normally play Constructed, and they were kind enough to give me a deck," Rood added. After these comments, a spectating and amused Kai Budde suggested that Rood move to Germany. "Sure, I'll come test with you guys sometime!" 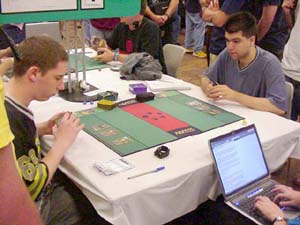 Both players decided to keep their hands. "You can tell me all the mistakes I make after the match," Rood quipped, as he played a Cabal Therapy and named Rotlung Reanimator. He missed completely, as Gabrenja revealed a Plaguelord and a Graveborn Muse, with a full complement of swamps. Rood's next play was a Rotlung Reanimator of his own, which Gabrenja allowed.

Gabrenja played Cabal Therapy and named Graveborn Muse, ripping one out of Rood's hand. Rood knocked on his deck before he drew, then sent the Reanimator into the red zone, taking Gabrenja to 18. He played a Cabal Archon, then sacrificed it to flash back Cabal Therapy, naming Graveborn Muse this time. A Zombie token that looked suspiciously like a Japanese anime icon subsequently hit play.

Gabrenja was stuck at four lands, and with no other plays, passed the turn. Rood swung, then played another Therapy, ripping a Phyrexian Plaguelord out of Gabrenja's hand. Gabrenja grimaced as he was left with nothing but swamps, both in play and in his hand.

Rood's next play was a Shambling Swarm. With Gabrenja at ten life, he needed to find a way to stop Rood's Onslaught. He played a Cabal Therapy and named Smother, taking another card from Rood, but it didn't matter in the slightest. Gabrenja drew his card and then swiftly packed up his lands.

Rood sideboarded in two Chainer's Edicts, clearly worried about Gabrenja's creatures. He didn't have much cause to worry during the first game, but he wasn't about to let Gabrenja have an advantage in the mirror match.

Gabrenja led with a swamp, but no first-turn play. Rood countered with a swamp of his own and a Cabal Therapy, naming Rotlung Reanimator. Gabrenja's hand revealed only one other land, and a host of spells – Plaguelord, Shambling Swarm, Therapy, Graveborn Muse, and Smother. Gabrenja played a second land and chose to use the Therapy he'd been holding, naming Rotlung Reanimator. 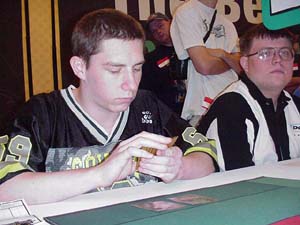 Rood was hiding nothing, and laid his hand out. It contained several swamps, two Smothers, an Unholy Grotto, and a Chainer's Edict, all invaluable in this match. Gabrenja played another land, his relief at having drawn one almost tangible at this point. Rood added a swamp of his own and passed the turn back.

Gabrenja played another swamp, making two he'd drawn off the top now. He tapped them all to play a Shambling Swarm, which Rood quickly Edicted away. Gabrenja played a Graveborn Muse next, and Rood had another Edict. He followed the Edict up with a Cabal Archon, and passed the turn.

Gabrenja played another Muse and passed back, still not having found any more swamps. Rood sacrificed his Archon to Therapy, naming Plaguelord and finding Blackmail and two Smothers as well. He played a Muse of his own and passed the turn.

Gabrenja drew from his Muse as Rood quipped, "Don't draw an extra card, Matias!" Rood smiled and drew two cards on his own turn, sending his Muse in to attack. He followed up the attack with a Cabal Therapy, naming Smother and seeing that Gabrenja had drawn another Swamp. Rood played a second Muse to join his first and passed the turn.

With five swamps in play and four cards in hand, Gabrenja surveyed his options. He played another swamp, then patted them contemplatively. He attacked with his Muse, which Rood blocked with his extra Muse.

Yes, folks, it's been positively a-Muse-ing here in Atlanta today.

Gabrenja next played a Rotlung Reanimator, which Rood promptly Smothered. Unfazed, Gabrenja played a Nantuko Shade. Rood shuffled his cards back and forth on his turn, then attacked with the Muse, which Gabrenja chose not to block. 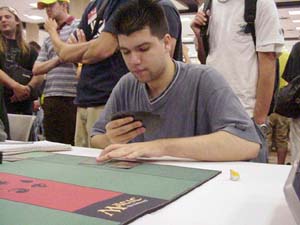 Rood was left with two cards in his hand, which Gabrenja Blackmailed away. Rood Smothered the Shade, but Gabrenja had another one right away. Rood flashed back Chainer's Edict to kill Gabrenja's Zombie token (an unfortunate card from the Ophidian card game), and passed the turn unhappily.

Gabrenja attacked with his Shade on his turn, bringing Rood to eight. On his turn, Rood played a Blackmail to rip a card out of Gabrenja's hand, then flashed back Chainer's Edict to kill the Shade. Gabrenja then played a Withered Wretch and removed several cards from Rood's graveyard.

On his turn, Rood was nothing short of contemplative. He attacked with his Muse to bring Gabrenja down to six life. Grabbing Gabrenja's graveyard, Rood shook his head and played a Mutilate. Gabrenja responded by removing cards from Rood's incredibly full graveyard, and Rood followed up that Mutilate with a Withered Wretch of his own.

Using his Unholy Grotto to recur his Zombies, Rood quickly regained an advantage. Gabrenja tried to curtail it by casting a Mutilate, but Rood recurred and played his Graveborn Muse on the next turn. Gabrenja drew his card and thought about his next play, staring at life totals (he was at four, and Rood was at five). He passed the turn after much contemplation.

Rood untapped, then activated his Graveborn Muse. He sent her into the red zone, bringing Gabrenja to one life. Gabrenja played a Mutilate, buying himself a little bit of time, but Rood's Unholy Grotto quickly negated it. Rood just recurred the Muse and played her again.

Gabrenja looked at his options on his turn, then drew his card and sighed. He scooped up his cards dejectedly.