Round 11: Mayhem, Mana, and Monsters

limbing the standings ladder is typically something ascribed to Constructed decks. They're played for more rounds, are intriguing to discover, and enjoy a place as the source of highlight reel moments from these events. But finding success in your Day Two draft is a significant factor in setting up a Top 8 run players can't overlook.

Guillaume Wafo-Tapa may not carry a current rank among the Top 25 players, but don't let that fool you: with a victory at Pro Tour Yokohama and three more Pro Tour Top 8s behind it (including at Pro Tour Theros back in October) speaks to the caliber of player he is. Add in a World Championship finals with seven Grand Prix Top 8s and you have the recipe for a Pro Tour Hall of Fame candidate.

Wafo-Tapa's opponent features eerily similar stats. No. 19 Ranked Player Paul Rietzl was the Pro Tour Amsterdam champion with three other Pro Tour Top 8s in his career, including a final appearance at Pro Tour Paris. He summed his career succinctly earlier in the day as "I haven't played in an event other than a Grand Prix or Pro Tour in ten years." With two Grand Prix wins among his nine Top 8 finishes, Rietzl is also a regular feature of Pro Tour Hall of Fame candidate discussions.

Did we mention that both Wafo-Tapa and Rietzl were in the Pro Tour Theros Top 8?

Similarities even went down to their choice of one of their colors for their decks: green. In covering No 2. Ranked Reid Duke's draft earlier we caught a few details about what Rietzl had found in his.

"I agonized between Gray Merchant of Asphodel and Reaper of the Wilds," Rietzl said, describing his first pick from Theros in his draft. I took the Reaper but it's stronger, right? The next pack shipped me one too." Flashing Pharika, God of Afflictions and more in his deck promised plenty of power would appear in the match. 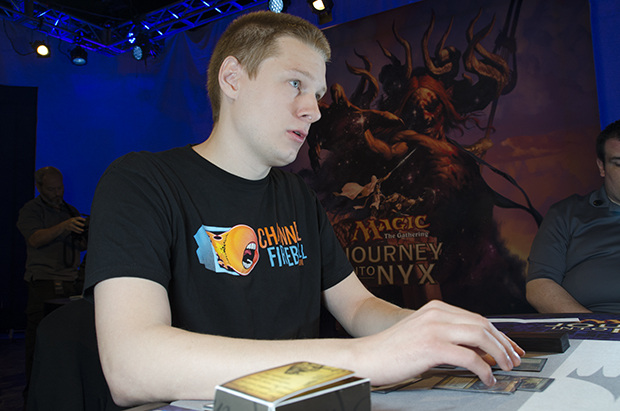 No. 19 Ranked Player Paul Rietzl boasts an impressive career, including a Pro Tour victory and a Top 8 at Pro Tour Theros... 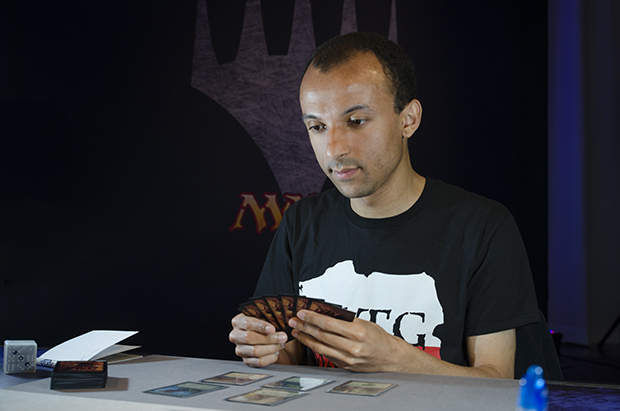 ...however, Guillaume Wafo-Tapa, Rietzl's Round 11 opponent, boasts a similar career, including a Top 8 finish at the same Pro Tour last October!

The first game was hardly a game at all: Rietzl's third turn Reaper of the Wilds into a fourth turn Raised by Wolves was a breakneck start. Dropping Wafo-Tapa to 14 life, then 8, before a second Reaper of the Wilds joined Rietzl's rampage, Wafo-Tapa's humble blockers were far too few and small. It was over before it had even really started.

The second game was a slower affair thanks to mana issues on both sides: neither player's second color appeared until turn five when Pheres-Band Thunderhoof joined Wafo-Tapa. He wasted no time putting two auras onto it to crack Rietzl down to 12 life on the next turn.

"Clean up, discarding." Rietzl had missed his land drop for the third turn, though finding his fourth a turn after that brought Nessian Asp then Raised by Wolves to his aid, thanks to Golden Hind. 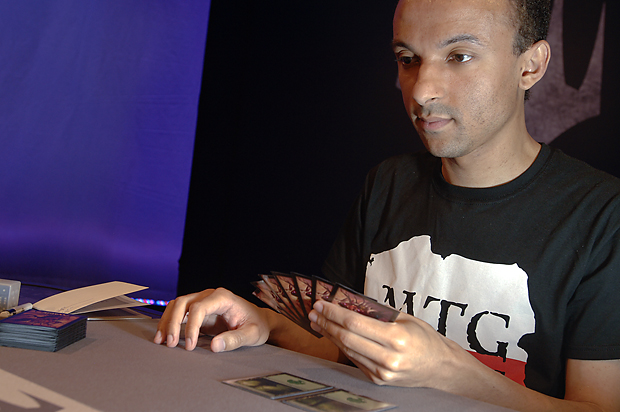 Wafo-Tapa's deck couldn't keep up with Rietzl's first-game opening hand, but he had plenty of time to set up against his opponent's awkward draws in the second game.

But the 7 to 31 life advantage for Wafo-Tapa was too much and Wafo-Tapa's Thunderhoof continued to sweet with spells.

"If you have nothing, let me figure that out and go from there. I can triple block and maybe lose next turn. If you have anything I'm dead..." Rietzl said as he worked out the math on the overwhelming attack he faced.

"You're not dead, but..." Wafo-Tapa said as he cast a Mortal's Resolve that was certainly something.

"It's just really bad for me. I can't offer you any more resistance this game unfortunately," Rietzl conceded. "I fought you as hard as I could. I mean, I got you down to 42."

"I do require one Swamp, please." Rietzl said as they shuffled up for the deciding game. He showed it was in his opener, and Plains was on Wafo-Tapa's side as well. The match would not be decided by missing mana, but rather who used it better.

Ravenous Leucrocota faced down Scourge of Skola Vale, then Pheres-Band Thunderhoof from Rietzl, but Wafo-Tapa's 3/5 Supply-Line Cranes was something that Rietzl had no blockers for. Though Brain Maggot plucked Boon Satyr from Wafo-Tapa's hand, Hopeful Eidolon on the flying Cranes kept the race close. 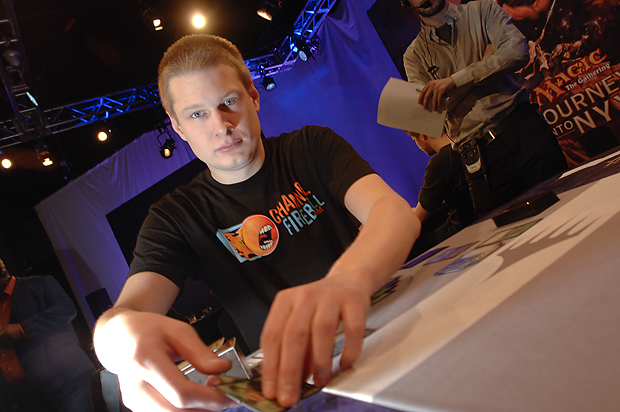 Monsters kept piling up on Reith's side, Wafo-Tapa kept up by buffing his lifelinking Bird until he found the answers he was looking for: Unravel the Æther unlocked Boon Satyr from Brain Maggot, and Reprisal destroyed Nessian Asp – the only real potential blocker – when Rietzl went monstrous. The Thunderhoof kept charging in, forcing Wafo-Tapa to begin shedding creatures to Rietzl's green Abyss, but it was too late: Boon Satyr finally bestowed its power upon the Cranes and Rietzl could only offer his hand.

"I felt like I was winning there for awhile," Rietzl said. "Reprisal and Unravel were the right cards to draw there."

It was a textbook ending to the match, including Wafo-Tapa being whisked away for a video interview. It made sense after all: He was well on his way to finding a fifth Pro Tour Top 8 by advancing to 9-2.