Round 11: Metagames vs. Les Plus Class 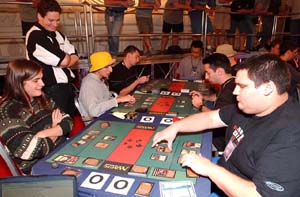 Metagames vs. Les Plus Class

An interesting aspect of this round is that both teams are French. Franck Canu of Metagames has quietly made his way on the gravy train, and played for Top 8 in the final round of two Pro Tours last season. Raphael Levy is probably the best known player at the table, with multiple Pro Tour Top 8 finishes. The third player on Metagames is Wilfried Ranque. Les Plus Class is made up of Amiel Tenenbaum, Gabriel Nassif and Nicolas Olivieri, who have had a few solid finishes on the Pro Tour; Nassif finished second in last week's Grand Prix London. It's also important to note that all six players are sharing a hotel room and beds this weekend.

The first few packs saw Levy establish himself as a black/blue player with Recoil, Hate Weaver and Recover, while Canu took Tsabo's Decree and Thicket Elemental. Tenenbaum signaled into black/red with Shivan Emissary, and then opened Thunderscape Master. However, he didn't take it, and picked up Soul Burn instead. Nassif took Repulse, Olivieri drafted Spite/Malice, and Ranque happily took the fourth pick Master. The rest of Invasion saw Ranque round out his removal base with Agonizing Demise, while Levy continued to put together a blue/black powerhouse, taking Barrin's Spite. Canu also picked up Charging Troll.

Planeshift was kind to Nassif, who drafted Dromar's Charm along with Nightscape Battlemage. Levy picked up more solid cards, getting a Rushing River and Cavern Harpy. Ranque was also quite happy with Planeshift, as he went into green to take a pair of Thornscape Battlemages. At this point in the draft an interesting pattern had occurred: each player would face off in a mirror match of colors. Levy and his black/blue/white deck would face Nassif's blue/black/white, Olivieri's five-color green would face Canu's five-color green, and Tenenbaum's black/red would face Ranque's black/red/green. Apocalypse changed things a bit, as Nassif leaned slightly into red for a Minotaur Illusionist, while Levy also looked to splash red for Jilt. Nassif was also happy to take a second pick Haunted Angel, and obviously thought it will be good in the mirror match.

As both teams shuffled there was plenty of talking in their native French, which the mostly American crowd obviously could not understand. It also became apparent that the games would be played with both teams speaking in French, which probably made them more comfortable after a weekend of competing in English.

Ranque got ahead in the race with Kavu Aggressor and Llanowar Dead, and used Thornscape Battlemage to kill off Tenenbaum's Tundra Kavu. Tenenbaum came back with Bog Down with kicker, which forced Ranque to lose his hand of Bloodfire Dwarf, Forest and Thunderscape Master. However, he drew Horned Troll on the next turn and bounced back the Battlemage. With plenty of tempo advantage and a favorable board position, Ranque won the first game. 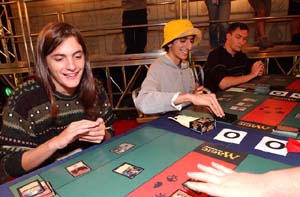 Nassif and Levy were in a bit of a stalemate, as Nassif had the board stabilized thanks to Samite Pilgrim, and a Disciple of Kangee to stop Levy's fliers. Tenenbaum and Ranque were playing out game two, and Ranque was "going off" with Pygmy Kavu, as he played it to draw a card, and then bounced it with Horned Kavu after Tenenbaum played Shivan Zombie. Tenenbaum answered back by playing a Bog Down with kicker, which caused Ranque to lose Caldera Kavu, Ancient Kavu and a second Horned Kavu. The Pygmy Kavu came back down, and Ranque drew two cards. A few turns later, Ranque used Urborg Uprising, getting back two Thornscape Battlemages, and gaining an insane amount of card advantage. To make things even worse for Tenenbaum, Thunderscape Master showed up.

Meanwhile, Nassif had started to overwhelm Levy by the numbers, as he had twice the number of creatures out that Levy did. This allowed Nassif to win his first game, while Ranque easily won his match. This put Les Plus Class down a match, but Nassif and Olivieri were both up a game in their matches. Nassif and Ruel were soon in game two, and Ruel had both Hate and Sky Weaver out, along with Whirlpool Warrior. Nassif had a kicked Benalish Knight holding Ruel's army back, and Ruel attacked without fear to deal four damage. He then played Recover to bring back the dead Sky Weaver, which was recast right away. Olivieri spent most of game two building up a weenie army, while Canu held back the attack with a few bigger creatures. As the turns progressed, Olivieri improved his board position, bringing out Hunting Drake, Savage Gorilla and Razorfin Hunter. In the other match, Nassif had Haunted Angel and a kicked Benalish Knight on defense, and the Angel blocked and traded with the Sky Weaver, which was pumped up with Hate Weaver. This killed off the Angel, and gave Levy a 3/3 flier, which helped him win the second game. 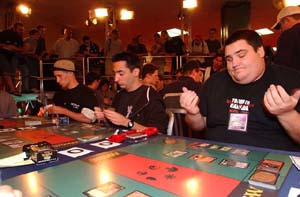 As Levy and Nassif finished up their second game, Olivieri won his second game and the match with the help of a second Hunting Drake. The deciding game now came down to the third game between Nassif and Levy. Nassif got off to a solid start with Haunted Angel, while Levy cast Coastal Drake and Standard Bearer. Nassif, who seemed to have the board well under his control, soon summoned a Minotaur Illusionist. Manacles of Decay killed off the Bearer, and the Illusionist attacked without fear along with the rest of Nassif's team. Levy brought out an unkicked Faerie Squadron, and was obviously in need of a second blue source, although he did have Sea Snidd active. Coastal Drake blocked Nassif's Angel during the next turn, and a Jilt with kicker took out the Angel, and bounced back a Dream Thrush.

This gave Levy a 3/3 flier, and the momentum seemed to be on his side. Dodecapod was summoned by Levy, and was followed by Cavern Harpy, which bounced back the unkicked Squadron. Nassif played his own Faerie Squadron with kicker, while Levy attacked for another three damage with the Angel. Thanks to Nassif's Reef Shaman, Levy could not get the second blue source he needed to play Faerie Squadron with kicker. Nassif's Squadron attacked back, and time was called. Levy cast Rushing River with kicker on end step, bouncing Dream Thrush and Disciple of Kangee. Nassif replayed the Thrush on his turn, along with the Disciple and a Stormscape Familiar. Levy played Sinister Strength on his Cavern Harpy and attacked, but Nassif still had the advantage in numbers. Levy realized he would lose, and conceded.