Round 11: Michael Doecke vs. Andrew Corney

With the exception of a draw, Andrew Corney had won every match he had played this weekend except for his feature matches. Round 11 saw him paired against Michael Doecke, the man with 2 Finkels. These two players have a history of draws, but both being on 23 points (7-1-2), a draw would really be good for neither player. 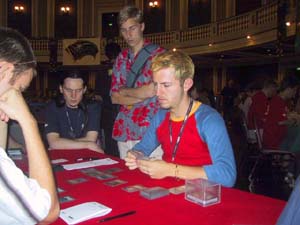 Andrew played first, and summoned a Fledgling Imp - a black creature, in anticipation for the 3rd turn Finkel. But it didn't happen, instead a Last Rites for 2 pulled a shelter and a Dreamwinder out of his hand. Michael had his own flier in the form of a Dusk Imp and they traded an early blow each. A Patriach's Desire dispatched Andrew's Imp and the another of Michaels 11 removal spells, a Morbid Hunger killed a Zombie Assassin. The skies were Andrews for a moment when an Aven Windreader made a brief appearance, before it too fall to a Morbid Hunger. Andrews next plan of attack was an Aven Fisher, which Michael was more than happy to trade with the Dusk Imp, as he brought the imp back with a Gravedigger.

The Gravedigger itself was removed from the game with a Sceond Thoughts, and Michael's tank - a Dreamwinder, found itself the target of a Ghastly Demise. Andrew had drawn and played exceptionally, but just had no answers for the card advantage that was about to follow. Andrew lost a Dusk Imp, an Aven Fisher and an Auramancer to Michael's 2nd, 3rd & 4th Morbid Hungers, placing him on 30 life. Michael finally put a threat on the table in the form of a Patchwork Gnomes, which was replied with a Hallowed Healer. The healer was Afflicted and Andrew's Painbringer was Syncopated out of the game. With no cards in either player's hand the Gnomes beat him down as Michael was able to Morbid Hunger Andrew out of game one. Michael finished on 42 life. 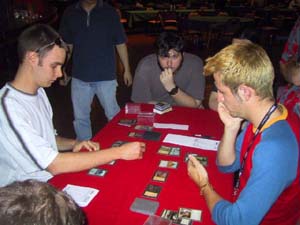 The second game again saw the Finkel/Hunger.deck last rites for 2 on the 3rd turn pulling threats out of his opponents hand (Auramancer & Shelter), but this time Andrew had more of an offensive with A Dusk Imp and a Fledgling Imp out early. A 4th turn Painbringer from Michael was always going to give problems to these small fliers. Even a second Shelter couldn't stop the Painbringer as Michael found innovative ways to get cards from his hand to his Graveyard, including sacrificing Islands to his Dreamwinder. With 2 cards ripped out of his hand early, and his Imps dropping like flies, he managed to reach threshold rather quickly, and this enabled him to tap Michael's creatures out with a Nomad Decoy.

Andrew's Aven Windreader fell to a Patriach's Desire coupled with an Island out of the graveyard to the Painbringer. Then Finkel made his appearance, albeit locked down by the decoy. Eventually, with what seemed like his 17th Morbid Hunger, Michael dealt with the Decoy, and attacked with Finkel, Dreamwinder and the mighty Patchwork Gnomes. Andrew was able to block with his Aven Fisher and a Zombie Assassin, but nothing could stop the card drawing of Michael.