Round 11: The Mirror Has Two Faeries

Kenji Tsumura and Paulo Vitor Damo da Rosa are both at 7-3, and the winner of this Faeries mirror will keep the Top 8 hopes alive 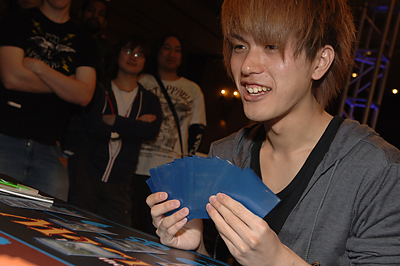 Kenji Tsumura is smiling... What else is new?PVD won the roll and elected to keep his opener, while Kenji threw his back after what seemed to be a difficult decision. His six were fine and the game began. PVD’s Underground River suspended Ancestral Vision. Kenji called with a Secluded Glen revealing Scion of Oona, suspending his own Ancestral Vision.

Mutavault helped make Bitterblossom happen, taking PVD to 18 from his lands. While PVD had the advantage, Kenji wasn’t drawing dead yet. He played a Sunken Ruins and revealed he had a set of Ancestral Visions, suspending two more.

Bitterblossom rewarded PVD with a token Faerie Rogue, but it looked like he was letting Kenji catch up, passing the turn with no other play. Kenji improved his set of Ancestrals to quads, playing a River of Tears and suspending the last Ancestral Vision.

Paulo made another token on his upkeep and sent his first token in, taking Kenji to 19. He sent the turn back to Kenji, missing a land for the turn. Kenji also decided that playing land was optional and passed the turn back to PVD with three cards in hand (with his first Ancestral Vision ready to resolve next turn). Paulo decided he couldn’t slow-play anymore and resolved a Vendilion Clique on Kenji’s end step, met by a Scion of Oona. Kenji had a pair of Cryptic Commands in his hand, but PVD chose to let his opponent keep both of them, hoping to strand the four-cost instants in Kenji’s hand.

PVD untapped and made another token, drawing three from his Ancestral Vision. The first token attacked into the Scion, tickling Kenji down to 18 before laying a Sunken Ruins. PVD then played Mistbind Clique on Kenji’s upkeep, choosing to champion the tapped token. Kenji decided to float three before his Vision resolved. He drew his card for the turn and played another Scion of Oona during his draw step, preventing mana burn. The four new cards didn’t provide a fourth land, so Kenji could only send the action back PVD’s way.

Paulo replaced his championed token and found a second Mutavault. One token, Vendilion Clique, and Mistbind Clique all crashed into the red zone. Kenji thought he had a safe block as he placed a shrouded 2/2 Scion in front of the token, but Paulo made a Scion of his own to force the trade. The Scion also enabled the Cliques to connect for half of Kenji’s 18 life.

Kenji laughed as he drew six cards from his from his twin Ancestral Visions and another from his draw step.

"Did you not draw land?"

He did, playing Underground River and Nameless Inversion on Scion of Oona. Spellstutter Sprite, Faerie Conclave and Bitterblossom hit the bin during the discard phase.

PVD made another token and sent the team. Kenji tried to make a Spellstutter Sprite to buy another turn, but Paulo’s Cryptic Command forced the concession.

Kenji immediately decided to go fish, caught nothing, and went down to five cards. A small nod expressed that he was keeping. Paulo, perhaps catching mulligan fever, went down to six and kept. 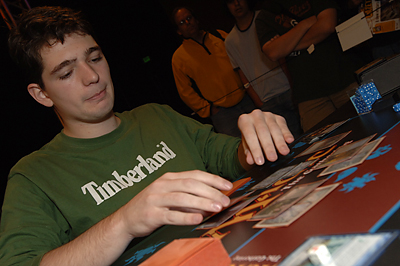 Kenji started with Island and Ancestral Vision, while Paulo had Pendelhaven. Kenji’s second turn of "Island, go" was a bad sign, but Paulo could only make Mutavault. Kenji’s third-turn Pendelhaven acted as a faux Raze, destroying both lands via the legend rule.

PVD decided it was time for someone to play something, so he played an Island and suspended Ancestral Vision. Kenji whiffed completely on his fourth turn, drawing a card and saying go.

Paulo rolled his suspend counter down to three and played Faerie Conclave before countering Kenji’s Ancestral Vision with Spellstutter Sprite. Kenji managed to find a Secluded Glen, but had nothing to do with it, so Spellstuter Sprite got to poke Kenji for 1. Post-combat Sunken Ruins for Paulo marked the end of the turn, but again Kenji had nothing, getting poked again by the little Faerie that could.

Kenji found something on the top of his deck as he played a morph. Cryptic Command countered it and drew PVD a card. Spellstutter Sprite attacked again after Ancestral Vision ticked down to one counter, and Secluded Glen showing Mistbind Clique sent the turn back to Kenji, who got Cliqued on his upkeep. Kenji tried a Terror in response to the champion trigger, but Paulo’s last two mana let him snag another spell with a second Spellstutter Sprite, and Paulo chose to champion the first Sprite.

Paulo drew a big three cards off of his Ancestral Vision and sent both Faeries in, putting Kenji to 12. A River of Tears and a Bitterblossom threatened to seal it, as Kenji’s only reply was a Mutavault.

Paulo received a token creature before making an Underground River and serving with both of his creatures again. Terror stopped the Mistbind Clique from hurting him too badly as he went to 11. A backup Mistbind Clique on upkeep met Cryptic Command, but PVD had his own copy of the powerful instant, and Kenji packed it up.