Round 11: More Statuary than a Sculpture Garden 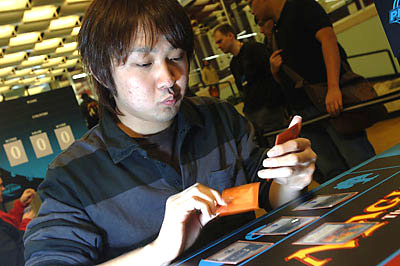 Takuya Osawa is undefeated heading into this round.re you still undefeated?" asked the 30-year-old German. "Oh, we have to end that."

Osawa has run roughshod over a Limited Pro Tour before, most notably when he burst on the scene to win last year's Pro Tour - Prague, and his undefeated run thus far shows that he's more than capable of doing it again. Sitting across from him is Jim Herold, a three-time Grand Prix winner who has almost never been heard of outside of Europe. The name itself rung a bell with me, but the coverage room had to look him up to figure out exactly why. His GP achievements clearly show he has game, as does his 8-1 record here in Geneva thus far. He'd need every bit of it to overcome Osawa and hand the Pro Tour winner his first loss of the tournament.

Osawa won the die roll and chose to play, but Herold put the first creature down in the form of Gossamer Phantasm. Osawa answered with Spiketail Drakeling, but let Herold slip an Amrou Scout past it, and then answered back himself with Primal Plasma in Hill Giant form. Temporal Isolation on the Plasma was more than Osawa was comfortable with, however, and the Drakeling took one for the team. Unfortunately for Herold, he was still stuck on two lands five turns into the game. Two turns later, Brine Elemental unmorphed and mercifully ended Game 1 with a quickness.

Game 2 opened with Knight of the Holy Nimbus and a turn-three morph for Herold, while Osawa had to spend turn three playing Chronatog Totem to find a source of blue. He then used the idol of Chronatogs everywhere to throw down Primal Plasma again. Herold then dropped Voidstone Gargoyle naming the Totem, again shutting Osawa out of blue mana. Osawa forgot about this a couple of turns later, attempted to play a pair of morphs with the Totem and five lands, and received a warning for his trouble. On Herold's side of the board things were going swimmingly, and he proceeded to destroy Osawa with flashed beasties like Crookclaw Transmuter and Whitemane Lion. 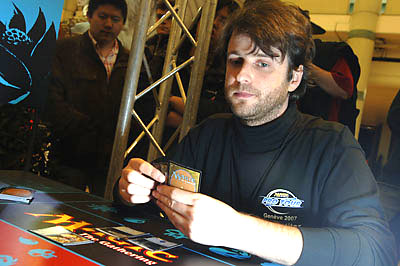 Stealth GP powerhouse Jim Herold was looking to take Osawa down a peg.

This game started with an face-up Coral Trickster for Osawa vs. Herold's suspended Errant Ephemeron. Osawa tossed down an Urborg Syphon-Mage for turn three and then used Erratic Mutation to smash Herold's morph, but not before Herold unmorphed it, returning two Islands to his hand and drawing two cards at the cost of all his tempo. Osawa pressed his advantage, bringing the beats with two-power weenies. Gossamer Phantasm gave Herold a blocker, but Melancholy made the German infinitely sad by blowing the Gossamer to the graveyard, while the resulting attack dropped Herold to 10.

Herold came back impressively using Knight of the Holy Nimbus, the unsuspended Ephemeron, and Crookclaw Transmuter as an instant, as the game slowed to a crawl. At this point, the luck of the draw kicked in, and that plus the big card advantage from earlier in the game seemed to give Herold an edge as the game neared its conclusion. Osawa sent in a morph and Herold let it through, dropping to 3 after Osawa revealed a Slipstream Serpent, but that left the Japanese player open to a lethal counterattack as Herold completed his comeback.