Round 11: Nicolaï Herzog vs. Oliver Braun 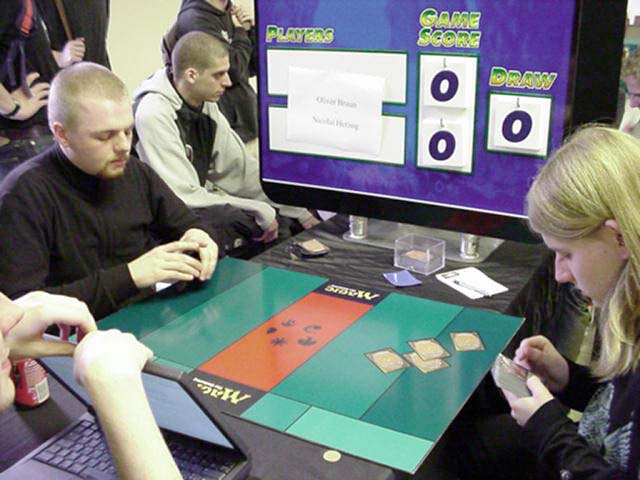 Oliver made Nicolaï play first, but the German Braun played the first spell - a third turn Dusk Imp. Herzog immediately killed it with Flame Burst before playing an Auramancer. Oliver played a Springing Tiger and attacked with it on his fifth turn. Nicolaï took the three damage before Repelling the Tiger at the end of turn. His position looked quite good as he cast Scrivener, returning the Repel to his hand, especially after the German could do nothing except replay the Springing Tiger.

Once again it was Repelled and Herzog got in an attack with the Auramancer and Scrivener. Braun played the Tiger for the third time, and this time it stayed in play - Nicolaï summoned a Balshan Griffin. The Tiger attacked before Oliver tried to Flame Burst the flyer, but Nicolaï returned it to his hand by discarding Syncopate. Nicolaï played it again and this time Oliver cast Ghastly Demise. Nicolaï discarded his last card in hand to bounce the Griffin once more;

Oliver attacked again with his Tiger to put Nicolaï on eleven, and played a Crypt Creeper.When Herzog attacked, the Creeper received a Sylvan Might and killed the Scrivener, but Herzog's topdeck hqd been a good one - he cast Persuasion to gain control of the Springing Tiger. When Oliver had to cast Acceptable Losses to get rid of it, Herzog gained a 3-1 advantage.

This was easily enough to give him the game, as Oliver had no more ways of dealing with the Balshan Griffin. 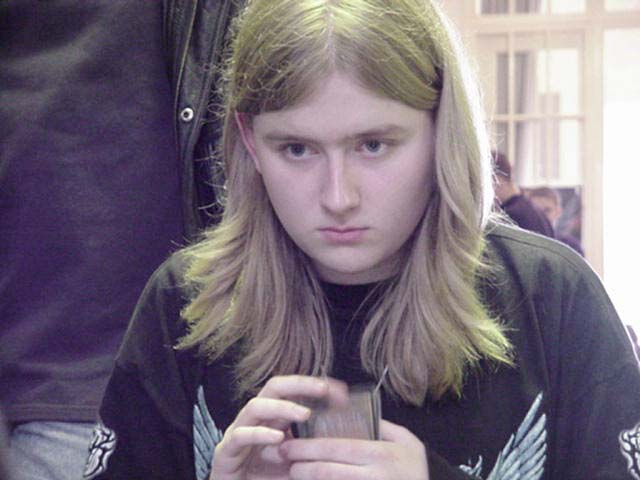 Once again Nicolaï went first, and Braun played a Druid Lyrist on his first turn. He had sided this in to deal with Nicolaï's Kirtar's Desires: Herzog didn't cast anything for a while, and the Druid Lyrist brought him to seventeen life before he finally cast an Aven Windreader. Oliver killed the flyer with a Thermal Blast and attacked again.

Herzog seemed happy when he finally drew a source of red mana, although he wasn't exactly under much pressure. In any case it enabled him to play a Pardic Firecat. Braun held back with the Lyrist and just summoned a Dirty Wererat, which was stopped from attacking by Kirtar's Desire. This time Oliver did attack with his Druid Lyrist, and of course Herzog blocked with the Pardic Firecat. When Oliver played Muscle Burst the Druid was removed by Second Thoughts, once again giving Nikolai a two card advantage.

The German cast Childhood Horror, but Nicolaï "persuaded" it to join his side, and Oliver had to Flame Burst it. He played Elephant Ambush but his token was Repelled. At least he had nearly enough mana to pay the Flashback. Herzog then compounded the German's misery by bringing back the Repel with Scrivener.

Oliver now had just a Dirty Wererat, and Nicolaï had two Scriveners and a Firecat. Herzog was in complete control with nearly a full hand of cards, but it took him a while to find a Balshan Griffin and win the game.